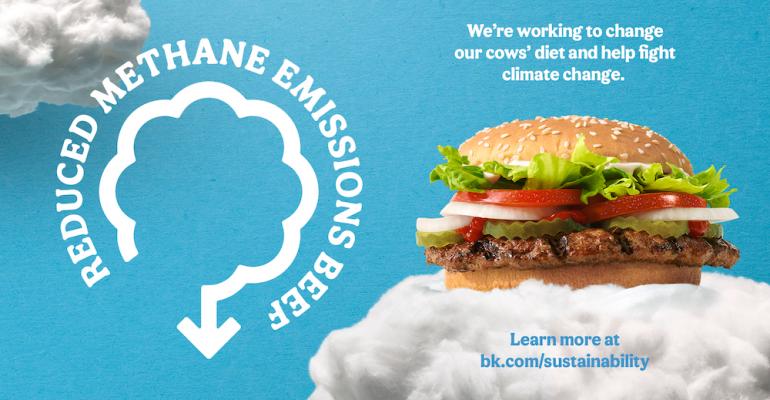 Burger King today started testing a type of ground beef that’s raised in a way that’s believed to produce fewer greenhouse gases, and the company is sharing its findings with the rest of the world.

The quick-service burger chain is offering a Reduced Methane Emissions Beef Whopper sandwich at one restaurant each in Miami, New York City, Los Angeles, Portland, Ore., and Austin, Texas, while supplies last. The ground beef comes from cattle that have had 100 grams of lemon grass added to their daily diet in the last four months of their lives, and preliminary tests indicate that that simple change could reduce methane emissions from cattle by up to 33%, according to Burger King.

As part of their natural digestive process, cattle belch methane, a powerful greenhouse gas that has a much greater global warming effect than carbon dioxide. Largely because of that (and not, contrary to popular belief, cattle flatulence), livestock is responsible for about 14.5% of global greenhouse gas emissions, according to the United Nations’ Food and Agriculture Organization.

“According to studies, in cattle, this plant has been shown to manipulate the digestion process and improve nutrient utilization,” Matthew Banton, global head of innovation & sustainability at Burger King, said in an email.

Burger King, a subsidiary of Toronto-based Restaurant Brands International, worked with two scientists to develop and test the new cattle feed: Octavio Castelán of the Autonomous University at the State of Mexico, and Ermias Kebreab at the University of California at Davis.

Banton said Castelán and his colleagues conducted the initial research, which was then confirmed with research by Kabreab and his team. The newly formulated cattle feed is open source and available to anyone who wants it under the name Cows Menu.

The initiative is being promoted with a marketing video, as well as one featuring comments from experts.

Banton said Burger King is now working with suppliers Kepak in Ireland, Marcher Fleischwerke in Austria and Grupo Gusi and JBS in South America to replicate the initial studies and expand production.

“This initiative is part of our Restaurant Brands for Good framework,” Burger King global chief marketing officer Fernando Machado said in a statement. “At Burger King, we believe that delicious, affordable, and convenient meals can also be sustainable. We are making all our findings public. This [is] an open source approach to a real problem. If the whole industry, from farmers, meat suppliers, and other brands join us, we can increase scale and collectively help reduce methane emissions that affect climate change.”

This is not Burger King’s first initiative to reduce greenhouse gas emissions. The chain also was a pioneer in rolling out the meatless Impossible Whopper at all locations in the United States.

There are more than 18,800 Burger King locations worldwide.

This story has been updated with more specific information about the locations of Kepak and Marcher Fleischwerke.
TAGS: Menu Food Trends
0 comments
Hide comments
Related
Sponsored