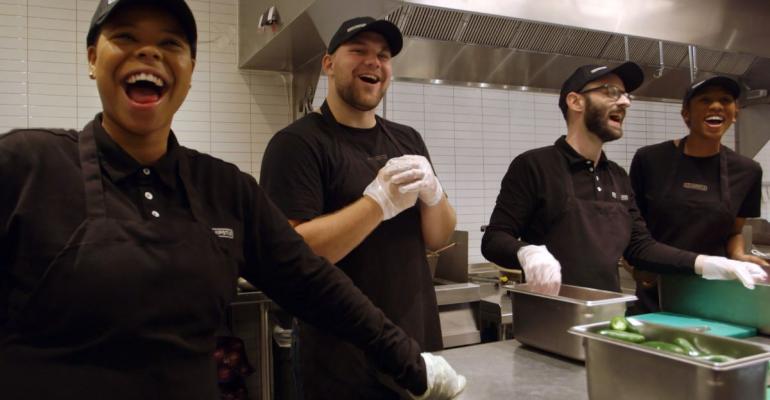 Chipotle pays $700K in cash bonuses to employees at 135 restaurants

More than 2,600 workers qualified for the new worker retention program

Chipotle Mexican Grill, on a quest to attract and retain employees, paid $700,000 to more than 2,600 qualifying hourly workers as part of a new cash bonus incentive program created this summer by the Newport Beach, Calif.-based fast-casual chain.

The employees, who work at 135 restaurants across the U.S. and Canada, are the first round of hourly workers benefiting from a new quarterly cash bonus program that rewards employees with a week’s worth of pay in exchange for helping restaurants meet sales, throughput and cash-flow targets.

The company said the bonuses, which were distributed at the end of July, are calculated by averaging each employee’s weekly pay per quarter.

A restaurant in Santa Ana, Calif., near the company’s Southern California headquarters, was among the 135 qualifying restaurants.

"Our team works hard every single day. From mashing avocados to servicing the line, everyone is focused on working together to provide the best possible guest experience," Angel Zuniga, the store's general manager, said in a statement. "The all-crew bonus reinforced the sense of pride and passion for what we do and how we do it."

Marissa Andrada, chief people officer, said the bonus program, introduced in late June, is one way the brand is “strategically investing in our people” while tackling turnover. In 2018, Chipotle’s annual turnover rate for all hourly employees (including crew, kitchen and service managers) was 144.9%, according to the company’s Sustainability Report, released in April. That is down from a 158% rate in 2017.

"It's exciting to see how many locations qualified and the high level of engagement from our restaurant teams,” she said in a statement.

Other Chipotle perks include a $5,250 annual tuition assistance program and an end of the year cash bonus for eligible hourly employees. The quarterly cash bonus was announced in late June.

In July, the Labor Department said the unemployment rate remained unchanged at a historically low 3.7%.

The restaurant industry has been particularly hit hard by the tight labor pool. According to a study by the National Restaurant Association Education Foundation, 82% of working Gen Z respondents said restaurants provided their first job. However, three quarters of those workers did not remain in the industry. Younger workers generally look for employers that offer a positive workplace culture.

Updated: This story has been edited to include additional details about the cash bonus program.