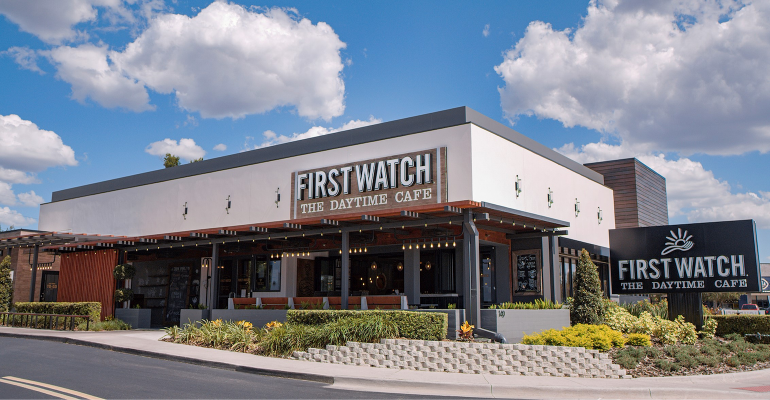 First Watch Restaurant Group Inc. is shying away from increasing menu prices or reducing the size of its menu amid a focused on increasing traffic as it swung to a profit in its first quarter as a publicly traded company.

The Bradenton, Fla.-based company, which completed its initial public offering in early October, reported earnings on Tuesday for the third quarter ended Sept. 26.

“We've taken no price this year,” said Chris Tomasso, First Watch CEO, on an earnings call with analysts. “We're focused on traffic, and we just felt like coming out of the pandemic our focus should be on getting people in the restaurants and getting our in-restaurant-dining numbers back up.”

“I'll also say that part of that philosophy was when we came out of COVID closures —  I know we're kind of out on island by ourselves on this — we didn't reduce our menu at all, again because we're focused on customer counts,” Tomasso said. “We didn't want to take anything off the menu that somebody came to us for even if it was a low-seller. Our focus was on getting everybody back and not disappointing any of our customers.”

“I think you'll see us get back to our cadence of looking at annual price increases,” he said,”but for right now we haven't announced anything that we're doing for next year.”

He added that First Watch’s philosophy in years past has been to take price to cover inflation, which generally meant price increases of 2% to 3% a year.

Tomasso added that First Watch units were able to staff up quickly and have largely avoided the labor crisis found in many areas of the restaurant industry.

“Whereas you might have seen sign-on bonuses and things like that,” he said, “we held off doing that and really focused on our team members.” Tomasso said the company, for example, increased referral bonuses.

“We believe that that our employees are our greatest ambassadors, our best evangelists and they can tell the story about what it's like to work at First Watch and not work at night and not work 24 hours a day,” he said. Most First Watch restaurants are open 7 a.m. to 2:30 p.m., requiring just one daytime shift.

During the pandemic, First Watch began rolling out adult beverages to many units, and 37 more restaurants began offering the menu of mimosas and drinks during the third quarter. The total with the adult-beverage menu at the end of the third quarter was 281 restaurants.

“We will continue the expansion to more restaurants throughout our system where feasible,” Tomasso said.  For the quarter, alcohol accounted for 2.2% of restaurant sales at all company owned restaurants, he said.

First Watch ended the third quarter with 428 restaurants in 28 states.