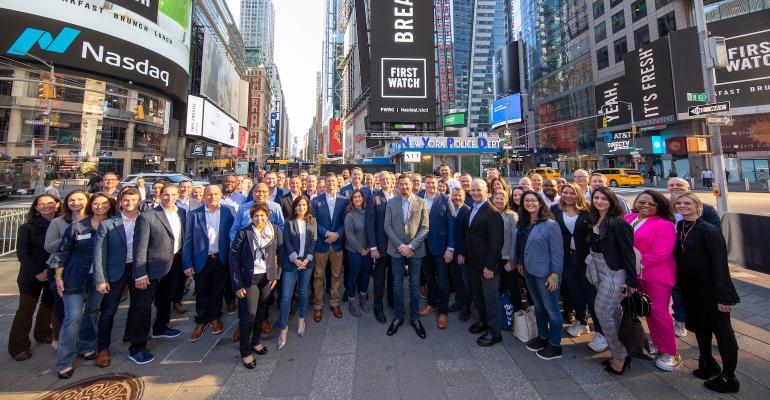 Nasdaq
First Watch team members gather in New York's Times Square for the brand's debut on the Nasdaq exchange. Those who had served 20 years or more were invited.
News>Family Dining

First Watch Restaurant Group Inc. went public Friday, rising about 23% from its offering pricing of $18 a share, and CEO Chris Tomasso said it serves as a positive market test for full-service restaurants.

The company has granted underwriters a 30-day option to purchase up to an additional 1.4 million shares at the IPO price. On Friday, First Watch shares, trading on the Nasdaq market under the ticker symbol FWRG, closed at about $22.13, up $4.13 a share.

Tomasso said the access to capital will help pay down and restructure debt for the company, which has 423 daytime restaurants in 28 states. The company is majority owned by Advent International.

“For a high-growth company like us,” Tomasso said in an interview, “we've been funding our growth through debt. And as a private company that could be more restrictive. … We're going to use the proceeds to pay down that debt and hopefully restructure our debt to make it such that it will be in a better position to fuel our growth going forward.”

Tomasso said First Watch anticipates 10% to 12% annual unit growth, which would be 40 to 50 new restaurants a year. 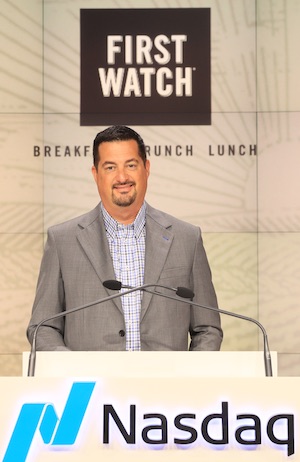 Tomasso worked with publicly owned Cracker Barrel Old Country Store Inc. before joining First Watch in 2006 as chief marketing officer. He was named president in December 2015 and CEO in June 2018.

Here are some highlights of Tomasso’s conversation with Nation’s Restaurant News on Friday:

How do you feel about the first day of trading?

Team members from all over the country — every level of our organization — are represented here today. It’s just a wonderful milestone for the company, and it feels like the markets are receiving us well.

What challenges do you see as restaurants proceed into the vaccine era?

I would say most of the challenges have more to do with the operations of the restaurants in the various municipalities and trying to keep track of mask restrictions and social distancing and not having anything that’s standardized.

How has First Watch been able to thrive during the pandemic?

We've been able to differentiate ourselves. I think that's reflected also in our performance as compared to the industry over that sustained period of time. We’ve obviously created a new segment, this daytime-dining segment. … Breakfast has been the only daypart with consistent year-over-year growth and that's despite 78% of morning-meal occasions still being consumed at home. There’s a tremendous amount of opportunity there to continue to grow and for us to be the leader in that segment.

You've nudged that formula in the past year by adding adult beverages?

We had that in place prior to 2020, and the early tests were going very well. I think coming into COVID we kind of felt like it was going to be a significant channel for us and so we accelerated that initiative.

Obviously, it's a highly accretive incremental-sales platform for us and — as great as that is — more importantly we believe it helps position us with that next generation of First Watch customers to ensure our long-term relevancy for the next four decades.

Our alcohol program is in the early stages but the early results on that have been spectacular. In the restaurants where we offer it, more than 7% of our customers order alcohol.

At the end of last quarter, the alcohol program was in about two-thirds of the system. … I see us getting to around 90% of our system.

It is good both for the managers and the hourly employees. It's really led to a turnover rate about 20% lower than the industry average for both hourly and managers. Our managers have been with us an average of 5.2 years, area directors of operations have been with us an average of 10 years, and our RVPs [regional vice presidents] 14 years, so we tend to get the best and the brightest in our industry with that proposition. And, more importantly, they stay with us for long time.

How has the pandemic impacted your off-premises sales?

Prior to 2020, the only way you could order to-go at First Watch was to call in and  come pick it up. We were doing about 5% or 6% [of sales]. For the last three quarters, we've seen that somewhere around 20%.

We've invested in things like enhanced to-go packaging. We're building new restaurants with a second make line dedicated to to-go. We have a pick-up area and dedicated parking. … It has really emerged as a sales channel for us. It’s now something that we're leaning into.