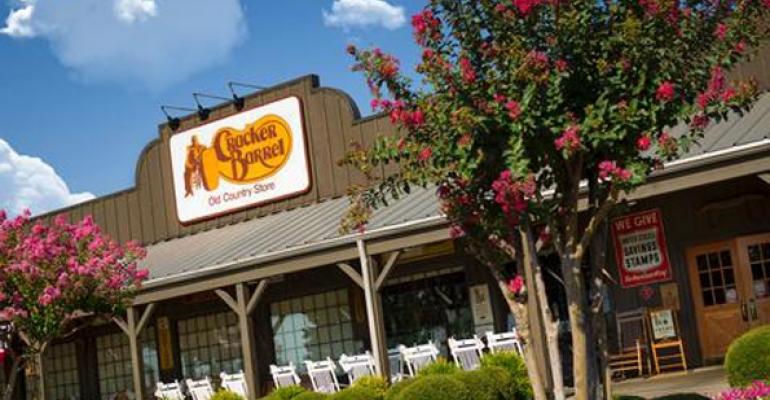 During an earnings call with analysts, Cracker Barrel chief executive Sandra B. Cochran attributed some of the company’s boosted sales to the brand’s high level of customer service.

“Our field employees consistently execute against our mission of pleasing people,” she said. New menu, merchandising and operations initiatives also contributed to the boost, she said.

Cochran said the company tried to drive its value messaging through various marketing and advertising efforts during the quarter, as well. “We’ve…been driving interest and excitement in the affordability of our menu through our billboard” and online campaigns, she said. “We have 20 percent of our billboards with sharp price-point value messaging.”

The company is also continuing to test Wholesome Fixin’s, a menu platform that features lower-calorie offerings at all dayparts. Wholesome Fixin’s will likely become a permanent fixture on Cracker Barrel’s menu in August, Cochran said.

However, during a question-and-answer session with analysts, Cochran acknowledged that the restaurant market remains volatile due to consumer uncertainty. “I think that as more news comes out about tax increases and their view about their own job security, we could continue to see some volatility,” she said, adding that consumers are still adjusting to a “new reality.”

The company’s 3.1-percent same-stores sales boost was due in part to a 0.7-percent increase in same-store traffic. Same-store retail sales — which don’t include sales at Cracker Barrel restaurants, but rather, in connected retail stores — rose 5.5 percent for the quarter.

The average menu price increase for the quarter was about 2.3 percent.

The company also raised its guidance for the full year, said Lawrence E. Hyatt, chief financial officer for the company.

Cracker Barrel executives now predict total revenue for the year will be between $2.6 billion and $2.65 billion, while expecting adjusted earnings per share to be between $4.75 and $4.85. They expect same-store restaurant and retail sales to rise 2.5 percent to 3 percent for the year.

The company projects commodity cost inflation to be between 3.5 percent and 4 percent for the full year 2013, Hyatt said.

Stephen Anderson, senior analyst, restaurants, at Miller Tabak + Co. write in a report that the market is “likely to applaud” Cracker Barrel’s same-store sales increase, even as family-dining competitors IHOP and Denny’s struggled during the initial months of 2013.

As of May 3, Lebanon, Tenn.-based Cracker Barrel had 622 locations systemwide.