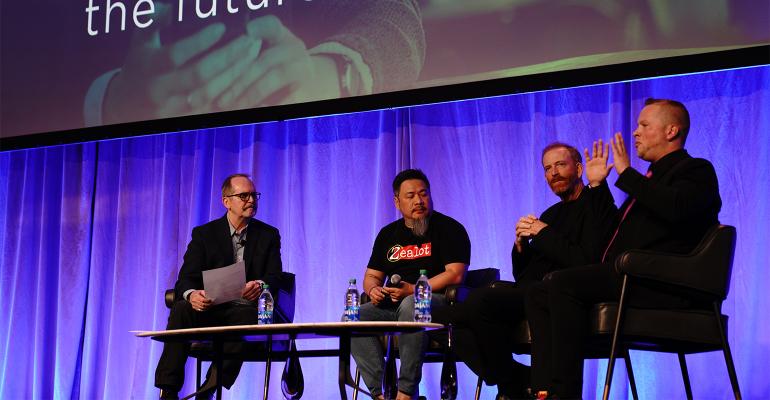 Randy Pfizenmaier
Making investments in the team was a common theme among this year’s crop of Hot Concepts.
News>Emerging Chains

Khanh Nguyen of Zalat Pizza says his restaurants have high “give-a-sh*t factor” on the front lines.

His workers — or “pizza zealots” — care about producing high-quality pizzas at a rate of about 2.1 per minute in part because they are part owners. Nguyen offers employees stock options, as well as full benefits.

“To have everybody care about every pizza, they have to feel part of an organization,” he said on a panel several brands from this year’s class of Hot Concepts at CREATE: The Future of Foodservice. “Everyone has a piece of this pizza pie.”

Making investments in the team was a common theme among this year’s crop of Hot Concepts.

For Bill Phelps, CEO of the mostly franchised Dave’s Hot Chicken brand, team building is the most challenging part of developing an emerging concept, but it’s also the most rewarding.

“You have to create a culture where people love going to work,” he said.

Dave’s Hot Chicken took off during the pandemic and now has 28 units open, with one scheduled to open each week for the rest of the year.

For Phelps, the key now is to put the systems in place to ensure a consistent product as the chain continues to grow as a franchised brand.

Chris Britt, director of operations for Agave & Rye, a full-service concept with a huge selection of both tequilas and bourbons, first launched in Covington, Ky., in 2018 and now has 10 locations, including the latest unit scheduled to open in Chattanooga, Tenn., on Oct. 13.

Agave & Rye also offers a full roster of benefits, including healthcare with the company paying 75% of the premium, vision and dental coverage, and soon a 401k.

And Agave & Rye has been working on communication flow throughout the company to empower team members at all levels. The company hosts open Zoom links for anyone to give feedback. “It makes them feel heard,” he said.

There are longevity bands that indicate how long each person has worked for the company. There’s a corporate tattoo. There’s even a comic book with characters based on real Zalat team members.

Nguyen said there are two rules to live by in Zalat Pizza’s DNA:

And secondly, the company looks to solve team problems without egos. “The boss isn’t always right,” he said.