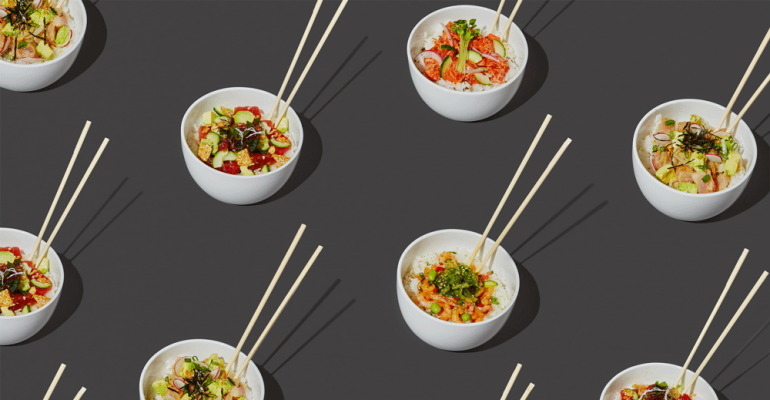 Like fro-yo and cupcakes, a shakeout of the trendy segment appears imminent

In late 2015, four college buddies from the suburbs of Southern California made the risky decision to open a poke restaurant in New York City. Even more challenging, they unveiled the fast-casual, raw-fish eatery in the throes of winter and next to the Big Apple’s first Chick-fil-A.

Curious crispy-chicken-sandwich fans swarmed the quick-service eatery, blocking the front entrance of little-known Pokéworks. But within several weeks, Pokéworks had earned social-media fame and a positive mention in a New York Times review.

Related: 6 poke concepts that are leading the segment

Among the biggest talkers was its mashup menu item, the poke burrito. The giant sushi roll is a tortilla-size roasted seaweed wrap stuffed with rice and raw fish pieces. Wait times at the restaurant clocked in at two hours. “Our line was longer than Chick-fil-A,” co-founder Kevin Hsu said.

Pokéworks has since opened two more New York City restaurants, along with a dozen other locations in Washington, California, Texas and Illinois. The Irvine, Calif.-based concept is among hundreds of fast-casual poke shops — both chains and independents — blanketing the country from coast to coast.

But, like foodie fads of the past — think fro-yo and cupcakes — a shakeout of the saturated industry appears to be imminent.

Poké Bar is a first-wave poke concept. A few years ago, savvy entrepreneurs like Ju realized that poke filled a void for affordable, fast-casual sushi restaurants.

These modern mainland poke concepts have since adopted the Chipotle-style of service, where diners customize each bowl along an assembly line. Most also offer nearly the same base protein and topping choices: kale noodles, two types of rice, spicy tuna, ahi tuna, salmon, tofu and scratch-made ponzu sauces.

Since opening in Southern California three years ago, Poké Bar has become one of the fastest-growing poke chains in the country. It has 53 locations stretching from San Francisco to New York.

Poké Bar plans to grow to 100 units by the end of the year. Most locations will be franchises.

“We have to be the market leader,” Ju said.

Poké Bar is going after untapped regions before rivals that look identical to the brand enter the same area.

“It’s hard to differentiate me versus them,” he said.

But some restaurants are setting themselves apart by offering seasonal fish and alternative bases such as quinoa, forbidden black rice, bamboo rice or wonton chips. Sweetfin, which has received capital support from well-regarded hospitality veterans, is one of those rogue leaders.

Bowls made with sustainably sourced seafood and scratch sauces are prepared by line cooks who break down fish and produce daily in an exhibition kitchen.

Like Whole Foods Market and other eco-friendly food brands, in-store fliers describe where and how fish is caught — billed by the chain as “pole to bowl” transparency.

And while most chains are franchising, Sweetfin’s eight locations are corporate-owned and look less cookie-cutter, with stylish fixtures, tables and chairs.

“Our stores are run more like proper restaurants,” co-founder Seth Cohen said. “Everything is homemade and handmade.”

Cohen and his partners launched the first Sweetfin in Santa Monica, Calif., in April 2015. Since then, the velocity of shops serving poke has exploded as restaurant owners strive to meet demand.

Grubhub, an online and mobile ordering company, said poke was the most popular dish ordered on its platform in 2017. Delivery provider DoorDash said poke orders have doubled over the last two years.

“It’s healthy and there’s no cooking. You can taste the freshness,” he said.

Cohen, whose restaurants are clustered in Southern California, said consolidation in the segment is coming.

“There’s probably room for two to three concepts to dominate the space, along with mom-and-pops,” he said.

But who will emerge as the top leaders? So far, these concepts are blazing a trail: When and where founded: April 2015, in West Hollywood, Calif.

Why it’s buzzworthy: Poké Bar touts itself as the poke category leader because it’s been serving poke long before anyone else. Yoon Ju’s parents have run a popular Japanese restaurant in Northridge, Calif., for about 30 years. About 20 years ago, the family added poke to the appetizer section of the menu. Seeing steady takeout business for the poke bowls, Ju created a shop dedicated to build-your-own poke bowls. They’ve been opening restaurants ever since. Growth plans: 8 new locations by the end of 2018, including units in Southern California and Washington, D.C.

When and where founded: March 2016, in Chicago

Owners: Owned by investors that include Levy Family Partners and Lakeview Investment Group

Service style: Pay at the counter, no assembly line

Why it’s buzzworthy: Founder Zach Friedlander noticed the poke craze occurring in Los Angeles and New York and decided to give it a shot in Chicago. Instagrammers and local food bloggers instantly took note of the brand’s tiny food stand at the city’s French Market in the West Loop. It led to opening another shop in Chicago a few months later and caught the eye of investment firms tied to Chicago restaurant tycoon Larry Levy. The capital infusion from Levy Family Partners escalated growth. In late April, the company tapped Potbelly veteran Chris Birkinshaw as its first CEO, who said “poke is here to stay.” The chain’s focus on making customizable bowls without forcing customers to “walk along a line” is a differentiator. “We’re able to execute in a smaller space with greater speed,” he said. When and where founded: November 2016, in Columbus, Ohio

Why it’s buzzworthy: Chen’s family, who emigrated from China a few decades ago, opened some of the first Chinese restaurants in the Columbus region. Chen saw poke as an opportunity to bring a healthful, quick-service meal option to a region loaded with fast-food burger joints. While poke isn’t an exciting proposition during a blistering winter in Columbus, it has proven to make sense as a year-round option. The company plans to blanket the Midwest and “climate friendly” towns in the Southeast, with an eye towards college communities, where Poke Bros. has seen success, spokesman Braden McGlone said. The brand’s 13 locations include a sit-down restaurant called Poke Bros. Bistro in Columbia, S.C. Growth plans: Establish brand dominance in the Southern California market, where it is scouting new locations in San Diego, Orange County and the South Bay

Why it’s buzzworthy: Sweetfin’s ethos is based on transparency, with a menu of chef-driven recipes served in a stylish setting. Fish is cut daily in-house and served with scratch sauces. Customers watch bowls being made by trained line chefs cutting sustainable raw fish. Signature bowls, including seasonal specials, are created in collaboration with well-regarded chefs such as Claudette Zepeda-Wilkins, a two-time competitor on Bravo’s “Top Chef,” and Matthew Beaudin, executive chef at the Monterey Bay Aquarium. In the summer, “Top Chef” All-Stars champion Richard Blais will craft a seasonal bowl. Sweetfin was named a 2016 Breakout Brand by NRN. When and where founded: Late 2015, in New York City

Brand story: Four college buddies discovered poke while traveling in Hawaii. When they returned to Southern California, they couldn’t find any restaurant to satisfy their poke craving. Two of the four owners had restaurant experience, so they decided to open a poke concept. They began testing flavor combinations and service setup in Yang’s Irvine, Calif., garage. Instead of opening close to home, they decided to test the concept in New York City. “For those that were familiar with poke, they loved it. For those not, they became intrigued,” Hsu said. The brand is known for its poke burrito — seaweed-wrapped poke that looks like a giant sushi roll.

Number of units: 2, in Portland and Denver

Growth plans: A third unit is coming soon to Portland; the company is scouting locations in Seattle, San Francisco and Los Angeles

Why it’s buzzworthy: QuickFish is an offshoot of the company’s highly popular Bamboo Sushi restaurant in Portland, Ore. The full-service sushi eatery had outgrown its kitchen space. When a small storefront became vacant in the same center, Bamboo tried to snatch it for a larger prep space. But the landlord had another idea: he suggested poke. “It was a happy accident,” said creative director Cory Schisler. It was an easy transition for the veteran sushi restaurant. QuickFish sources seafood from the same high-quality and sustainably caught suppliers as Bamboo. The menu features seven signature bowls, including a spicy Fire Bowl made with Kodiak sockeye from Alaska. All fish is cut in house. Some seafood is “frozen at sea” to maintain freshness, Schisler said.