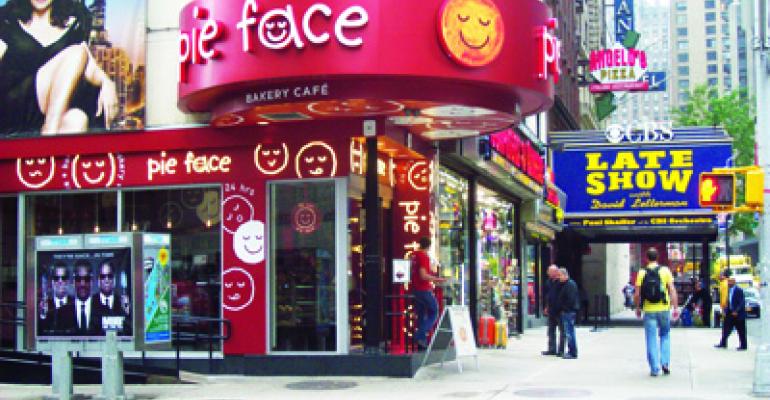 Wynn will also appoint two directors to the company’s board of directors.

The Pie Face concept, which is open seven days a week, 24 hours a day, specializes in savory and sweet handheld pies along with coffee, sandwiches, wraps, soups and pastries. The first U.S. unit is located adjacent to the Ed Sullivan Theater in Times Square. Three more New York units are slated to open by the end of 2012, and the company has plans to boost that to 10 or 15 in the near future.

After that, Pie Face USA plans to open locations across the United States.

Stores will be supplied by a central commissary in Brooklyn, N.Y., where the pies are prepared and blast frozen.

Savory selections are available in two sizes: large pies, which are priced at $5.95 each, and mini pies for $2.75 each. Savory pies are expected to account for about 45 percent of total sales.

“Having met the Pie Face USA management team recently and having visited their first store in New York, I came to the conclusion that they were bright people with a bright concept,” Wynn said. “I look forward to backing them as they expand throughout Manhattan and across the United States.”

The company also announced that Kevin McCollum, a Broadway producer, would consult for Pie Face USA on domestic marketing programs.

“We are thrilled to have such experienced and talented entrepreneurs supporting us in the roll-out of Pie Face USA,” said Wayne Homschek, cofounder and chief executive of Pie Face Australia and president of Pie Face USA.

“Initially we will be opening company-owned stores in New York City, followed by a planned national rollout in other key markets across the United States,” Homschek said. “We could not have asked for a better endorsement of our brand and our potential in both the United States and globally.”

Pie Face Australia has about 75 company-owned and franchised units in Australia. The company anticipates systemwide sales of $50 million in 2012.