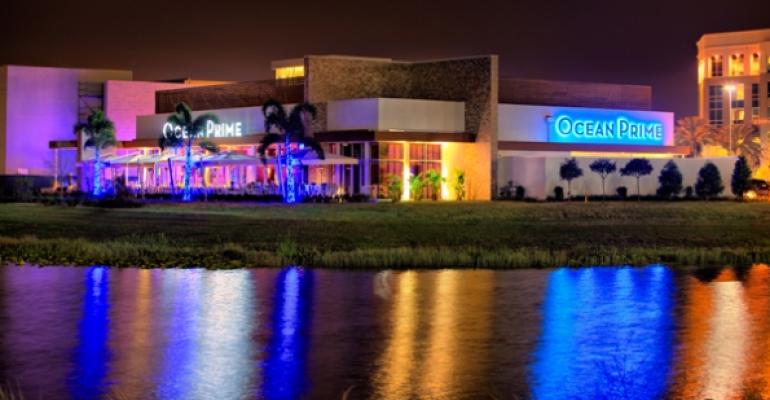 Cameron Mitchell concept works to eliminate the veto vote with a focus on both steak and seafood.

Most chains pursue a strategic mission of populating a given area with multiple locations, but Ocean Prime is a one-per-market type of restaurant, its founder said. The upscale concept is intended to be something special — not necessarily for everyday dining.

The chain was the brainchild of veteran restaurateur Cameron Mitchell, who today runs Ocean Prime’s multiconcept parent company Cameron Mitchell Restaurants, based in Columbus, Ohio. When it first opened as Mitchell’s Ocean Club in 2006, the idea was to create a fine-dining restaurant where customers could sip fresh, elegant cocktails and dine on high-end steaks and seafood. Today, despite the name change for non-Columbus locations, nine-unit Ocean Prime largely remains the same concept across its system.

“Our menu really is 50-50 [and] sometimes 60-40 seafood to steaks,” Mitchell said. “We’ve got a great variety of seafood, much more than a traditional steakhouse would have.”

Although Americans appear to be eating less seafood than they were a year ago — the National Oceanic and Atmospheric Administration said seafood consumption fell from 15.8 pounds per person in 2010 to 15 pounds per person in 2011 — sales at Ocean Prime are up. In fact, fish items are among the most popular on the menu, Mitchell said.

Still, he said, the chain specializes both in steaks and seafood, a surf-and-turf combination that helped propel the brand to $7 million in average unit sales in 2012. And because the focus on seafood and steak is highlighted in the brand’s name — Ocean Prime — customers know it’s a place where the veto vote doesn’t matter, Mitchell said.

“You can really eliminate that ‘no’ vote,” he said. “There’s something for everybody.”

That “something” ranges from USDA Prime steaks to the restaurant’s No. 1 seller: Chilean Sea Bass with Champagne Truffle Sauce, served with whipped potatoes for $42.

Ocean Prime also features a raw bar where guests can get the Shellfish Tower or Colossal Shrimp Cocktail, Mitchell said. The bar menu also has an upscale twist and features such selections as White Truffle Caviar Deviled Eggs and Ahi Tuna Tartar, he said.

Meanwhile, the restaurant’s supper-club atmosphere helps to differentiate Ocean Prime from the competition.

“All of our locations have live music in the bar,” Mitchell said. “We think that live music component is an important part of our brand.”

In addition, most units have a patio terrace location, “which allows people to come in a little more casual,” he said, adding that customers can order fine-dining fare while wearing shorts on the terrace in the summer.

Ocean Prime also features signature cocktails, including a Cucumber Gimlet made with gin and muddled fresh cucumber and lime, and a Berries & Bubbles cocktail made with citrus vodka, marinated blackberries, house-made sour and brut.

Although the brand’s surf-and-turf focus isn’t necessarily a competitive differentiator — many steakhouses serve lobster tails and crab legs — it’s not a bad segment to be in for a “local-feeling” chain like Ocean Prime, said Darren Tristano, executive vice president at market research firm Technomic Inc.

But because of the name, he said, “I think they also are going to attract more of those [consumers] who are considering seafood versus steak.”

In recent years, Tristano said, there’s been a shift away from bigger steakhouse chains, like Ruth’s Chris Steak House and Morton’s the Steakhouse, toward more independent restaurants and small chains that are unique market to market.

“They’re really building a strong brand where you have to go to that location in order to have the type of service they offer,” he said. If a chain only has one unit in a given area, “all of the attention goes to that unit, and they can manage demand much easier.”

All Ocean Prime locations are company owned, Mitchell said. And he plans to keep it that way — at least for now.

“I don’t ever really see franchising, per se,” he said. “It’s just a part of the business that I’m not attuned to. But you never know.”

There are currently nine Ocean Prime locations in the United States, with a 10th opening in Philadelphia during fall 2013, Mitchell said. There’s an opening in Beverley Hills, Calif., slotted for spring 2014, and Houston should have a location in the fall of 2014.

“We really have no set geographic plans,” he said. “We’re looking all over the country. We’re looking for trophy locations. If it takes us five years to find the right spot in New York City, then that’s what it takes.”

This approach makes sense for a fine-dining brand like Ocean Prime, Tristano said.

“Based on a very cautious approach in terms of expansion, I think their growth prospects are good. There are a number of cities that they aren’t in and they certainly could expand to,” he said.

“Our core customer is a 30- to 60-year-old somewhat affluent person who enjoys fine dining and good food,” Mitchell said. “And we’re not pretentious in any way. We design it specifically to not be intimidating.”

That places the chain in a prime space for growth, Tristano said. Affluent consumers have a lot of pent-up demand and are ready to spend.

“We are off to a great start this year. Business is good,” Mitchell said. “We basically cruise right along with the economy. As long as the economy is moving forward, our sales are moving forward.”