/sites/all/themes/penton_subtheme_nrn/images/logos/footer.png
Recent
Recent
3 of 4 consumers plan to go to restaurants this holiday season
Dec 07, 2022
The most-listened-to episodes of Extra Serving in 2022
Dec 07, 2022
Taco John’s looks toward the future with growth plans and a menu makeover
Dec 06, 2022
Uber Eats has to pay Chicago $10 million for listing restaurants without permission
Dec 06, 2022
Existing Cousins Maine Lobster New York City franchisee Yunus Shahul captures available market in Maryland, Virginia, and Washington, D.C. in multi-unit franchise deal
Dec 06, 2022
Featured
How 21 restaurant companies performed in their most recent quarters
Nov 22, 2022
How eco-friendly Seattle restaurant chain Just Poke is doubling in size in 2022
Nov 17, 2022
In the Mix this week: White Castle’s culture, a CREATE recap, Denver’s restaurant scene and more
Oct 27, 2022
How this emerging brand is planning on nearly quadrupling in size in just one year
Oct 21, 2022
Breakout Brands
brought to you by
News>Emerging Chains 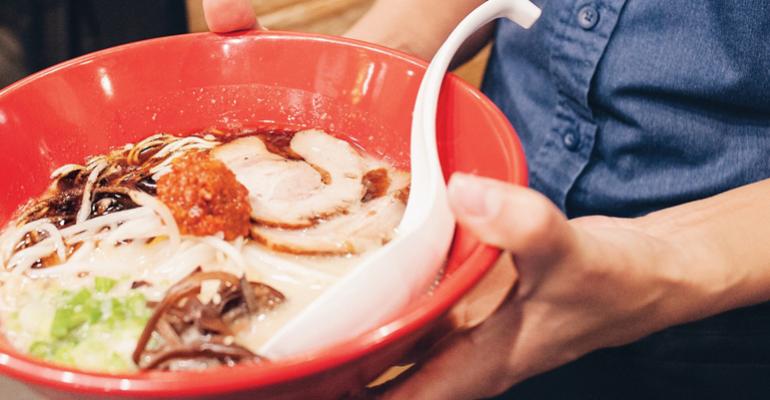 Ippudo is on an ambitious mission to win over customers stateside and beyond, one bowl of noodles at a time. Fueled by a 2017 investment from I&P Runway, a partnership between Japanese holding company Chikaranomoto and Panda Restaurant Group, the Rosemead, Calif.-based parent company of quick-service brand Panda Express, the ramen concept is eager to strengthen its U.S. presence.

Since its humble beginnings in Japan as a 10-seat shop founded by Shigemi Kawahara, known as the “Ramen King,” in Fukuoka in 1985, Ippudo has flourished into a globally recognized brand with more than 240 locations. Its entry into the U.S., however, was more recent, starting in New York City in 2008.

As its main offering, the chain offers bowls of thin noodles in its distinctive Hakata Tonkotsu broth, a Fukuoka variety of pork-based broth cooked at a rolling boil, lending it a rich body and an opaque, milky-white appearance. These bowls come with a range of toppings such as pork belly chashu or soy sauce-flavored boiled eggs. Patrons can also enjoy izakaya-style bites and alcoholic beverages such as beer and sake, with an average check of $20 per person.

Backed by the Panda Restaurant Group partnership, Ippudo has penetrated a new U.S. market: California, with units in Berkeley, San Francisco and Santa Monica. More locations are planned for America in the years to come, as the concept carries out plans to open 300 stores in Japan and 300 more internationally by 2025. In its global growth, a primary focus for the brand is to spread ramen culture.