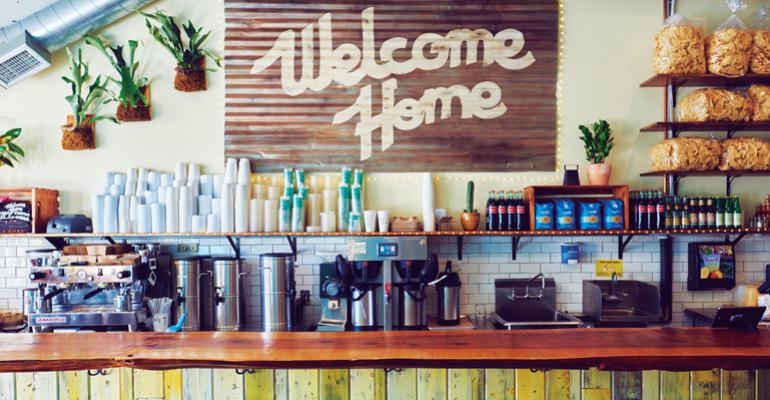 The wallpaper at HomeState’s original location in Hollywood, Calif., is blue. But not just any blue.

It’s a shade painstakingly selected by owner Briana Valdez to match a paint color she recalls seeing all over Austin, Texas, years ago.

It’s one of countless little details at the five-year-old taco shop designed to bring the food — and the feeling — of Valdez’s native Texas to Los Angeles.

“I was always looking for food from home,” she said. “I remember asking for queso and getting a bowl of shredded cheese, asking for a frozen margarita and people looking at me like I was insane.”

So she opened HomeState in a 900-square-foot space in Hollywood in December 2013, serving up Lone Star State versions of Mexican food, with a dose of Texas charm.

Flour tortillas and queso — Texas staples she called “non-negotiable” — are both made in-house. Signature breakfast tacos, named after Texas rivers, counties and street names, are filled with scrambled eggs, beans, potato and meats like bacon, chorizo or brisket. Migas, Frito pie and guacamole round out the menu, and cocktails and beers on tap are available at some locations. The average ticket is $18 to $20.

Lines were soon snaking out the door, and the brand has seen 15-percent growth each year since it debuted. A second Los Angeles location was added last spring and a third is scheduled to open this month in Playa Vista, a fast-growing area often referred to as “Silicon Beach” for its recent influx of tech companies.

“I feel like we’re just getting started,” she said.