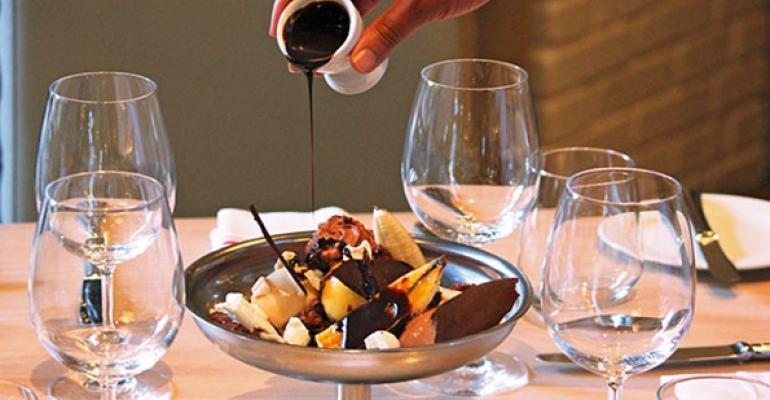 About 10 percent of all meals and snacks eaten in restaurants include dessert, according to consumer research firm The NPD Group. But when guests do order dessert, they like to go over the top, pastry chefs and restaurateurs report.

At The Dutch at W South Beach Hotel in Miami Beach, Fla., pastry chef Josh Gripper serves Gripper’s Chocolate Grail for two, which vies with the restaurant’s signature pies for the position of top-selling dessert.

Noah French, the pastry chef at Tag restaurant in Denver, said guests are often looking for desserts to celebrate special occasions, so he developed the Chocolate Sphere, a chocolate shell stuffed with marshmallows, brownies, walnuts and vanilla cream. The dish is finished with hot caramel sauce poured over it tableside. The dessert is priced at $12.

Desserts that layer multiple treats are also proving popular this year. For example, Café Pita + in Houston serves a stacked baklava cheesecake for $4.99. Omer Okanovic, chef-owner of the Bosnian restaurant, said the dessert — a wedge of baklava atop a slice of cheesecake — combines two favorite desserts of East and West, exemplifying Bosnia’s multicultural heritage.

Eleven-unit Village Tavern also offers a stacked desert at four of its locations across North Carolina and Alabama. The double-decker cheesecake features a slice of chocolate cheesecake spread with a layer of chocolate fudge, which is then topped with a slice of traditional cheesecake. The dish is garnished with raspberry sauce and chocolate glaze and priced at $6.95.

features a plethora of layers with its 23 Layer Chocolate Cake, which is available at the three-unit chain’s restaurants in Chicago and at the Mohegan Sun resort in Uncasville, Conn.

Hillary Rikower, pastry chef at the Chicago restaurant, said the dessert is made by very thinly slicing a traditional chocolate cake into 11 layers. Those slices are alternated with layers of whipped bittersweet chocolate ganache, then spread with a shinier chocolate ganache. Each slice is garnished with vanilla whipped cream and a hazelnut tuile. The cake is priced at $14.