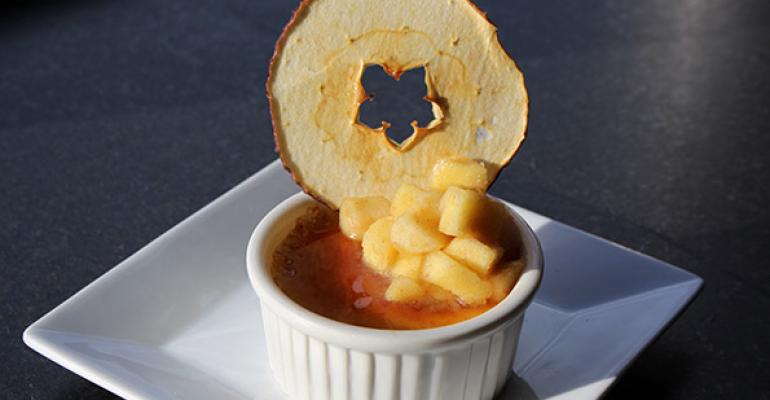 As temperatures outside plummet to arctic levels, chefs inside are cooking custards and puddings designed to warm up diners.

According to Datassential MenuTrends, puddings and custards, which are featured on about a third of dessert menus, grew slightly in the past year. Two desserts have been showing up more on menus of late: bread pudding and crème brûlée, which increased menu penetration by 5 percent and 3 percent, respectively, in the last 12 months.

Among chefs responsible for the growth of crème brûlée is Michael Ferraro, executive chef and partner at Delicatessen in New York City. In November, he added a Spiced Pumpkin Crème Brûlée with maple cream to the menu.

“Crème brûlée is one of my favorite desserts,” Ferraro said. “We put it on the winter menu because it’s exactly what you want before heading back outside. It’s warm and creamy, and I love breaking through the caramel for that first bite. I’m also partial to maple and pumpkin flavors when it’s this cold.”

Pastry chef Jennifer Renaud of Tempo Scratch Kitchen + Cocktails in Waltham, Mass., is also serving crème brûlée this winter. Inspired by seasonal ingredients, she added a Cider Bourbon Crème Brûlée to the menu in January, served with caramel apple compote and topped with an apple chip.

“Bourbon is the perfect thing to cook with in the winter months, and along with the apples and cider it puts a delicious and creative twist on a classic dessert,” Renaud said.

In a Latin twist on the classic dish, a goat milk custard brûlée with cajeta, a Mexican syrup made of sweet caramelized milk, will be offered on the debut menu at Odys + Penelope, Karen and Quinn Hatfield’s contemporary churrasco and grill, scheduled to open Jan. 12 in Los Angeles.

Other chefs are turning to bread pudding.

In October, Coconut Bread Pudding with roasted pineapple and crème anglaise was added to the menu at Temple Bar in Boston’s Harvard Square. And a Rocky Road Bread Pudding made with butterscotch bread pudding with chocolate chips in a caramel sauce and topped with candied walnuts and toasted homemade marshmallow is served at all 12 Perry’s Steakhouse & Grille locations.

Not content to menu one dish or the other, some chefs have married the two trends, creating pudding–crème brûlée mashups.

At Blue Ribbon Brooklyn in New York, chefs and co-owners Bruce and Eric Bromberg offer a Banana Walnut Bread Pudding with Banana Caramel Sauce. The dessert was born in the early days of the duo’s Blue Ribbon Market, when they mistakenly made too much bread while also making crème brûlée.

“We started cutting up all those baguettes and folded the pieces into the custard we had made for crème brûlée,” the Brombergs said. “Then we played around and added different flavorings to different batches and cooked it all in a water bath.”

At La Sirena Clandestina in Chicago, chef-owner John Manion offers a whimsical take on the two dishes with his Butterscotch Pudding served with brûlée marshmallow crème and a salted chocolate cookie.