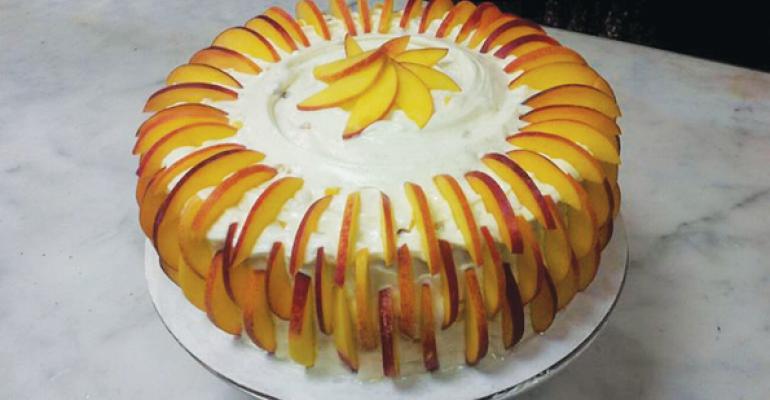 It may be a bit early in the season for fleshy, juicy stone fruits, but chefs across the country are already plotting creations featuring cherries, plums, peaches and apricots. And a handful of chefs who had the foresight to preserve last year’s harvest have already begun adding them to their dessert menus.

Andrea Carbine, owner of A Toute Heure in Cranford, N.J., is serving a local, seasonal take on classic pineapple upside down cake made not with exotic pineapple but with New Jersey-grown greengage plums preserved last summer in a syrup made with fennel and star anise.

“Being seasonal, we know spring starts to be a veggie time, but it can be a bit of a lag time for fruit. So in winter we canned a lot of fruit,” said Carbine. “It lets us get a jump start on the season.”

Ryan Westover, pastry chef for Clyde’s Restaurant Group in Washington, D.C., also planned ahead, hand-pitting and preserving eight gallons of cherries in simple syrup. Earlier this year he used the delicate fruit for a cherry spring roll with classic cherry pie filling and a maraschino whipped cream, as well as a garnish for various dishes.

“I did that at the height of the season so I’d have something interesting in the middle of winter,” said Westover. “[Pitting the cherries was] really labor intensive, but worthwhile.”

Though Carbine and Westover are using preserves to fill the spring fruit gap, they, like many other chefs, are patiently waiting for the real deal.

When fresh peaches come into season in June, Westover plans to serve up a white butter cake with peaches baked into and adorning it. He’ll also use the peaches to make fruit leather, which he’ll use as a garnish on ice cream or cakes. Meanwhile, Carbine is looking forward to the arrival of fresh plums so she can start serving sugarplum sorbet with pistachio cake.

Like Westover, chef Thomas Dunklin of Three Degrees Restaurant in Portland, Ore., is also fond of cherries. When they finally arrive in season, Dunklin will serve Cherries and Chocolate, a Rainier cherry panna cotta with a chocolate doughnut, tarragon cherry compote and Oregon sea salt.

Chef Joe Simone enjoys stone fruits so much that when he opens Simone’s in Rhode Island this June one of his first desserts will be Portuguese Bread Pudding with Roasted Plums. Baked in individual gratin dishes, the dessert will be served with a scoop of house-made honey ice cream.

“I like the depth of flavor you get from stone fruits, particularly when roasted,” said Simone. “Stone fruits are typically sturdy and can handle roasting without losing the texture of the fruit.”

Every year, chef J. Joho of Everest restaurant on the 40th floor of the Chicago Stock Exchange visits the orchards of southwest Michigan to harvest apricots, peaches, cherries and Mirabelle plums. Among the many desserts he is considering putting on the menu when these short-season fruits finally arrive is Black Forest Reimagined: Kirsch-infused Bing cherries, Guayaquil cocoa and candied glazed cherries.

Correction: May 1, 2014  An earlier version of this story misstated the location of A Toute Heure. The restaurant is located in Cranford, N.J.