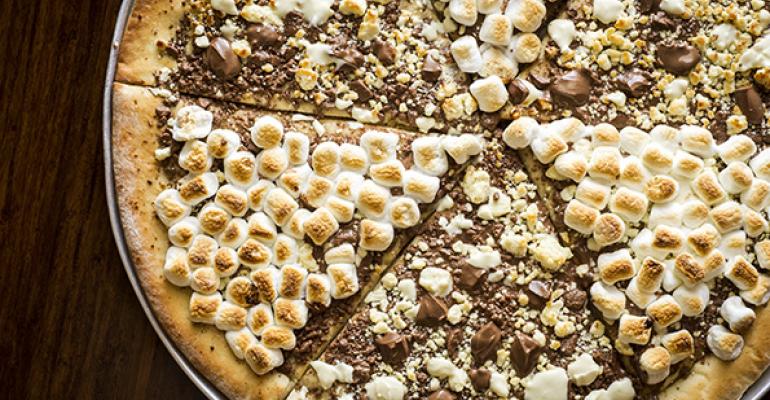 Chocolate at the heart of desserts designed for sharing

Chocolate is one of life’s great pleasures, and it seems today’s diners don’t like to indulge in it alone. More shareable desserts—particularly featuring decadent chocolate—have shown up on restaurant menus.

“[This growth is] reinforcing consumers’ desire for variety and the ability to share items with others, making dessert a more social occasion,” said Bethany Wall, foodservice analyst at Mintel.

“We want people to rethink the way they think about chocolate,” said Macae Lintleman, spokesperson for Max Brenner. “Chocolate is more interactive. It should an experience … shareable …”

The menu at the chain’s five U.S. locations features many items made for more than one person, including Fondue for Two, a treat featuring waffles, cookies, cake, fruit, marshmallows and creamy chocolate; and Chocolate Pizza, made of sweet pizza dough with melted chocolate chunks and toppings, such as crushed hazelnuts, bananas and roasted marshmallows, and drizzled with melted peanut butter sauce. Both desserts change with the seasons. Now available are the Fall Fondue for Two, featuring seasonal fruit and flavors such as apples, mulled toffee and gingerbread, and the Caramel Apple Chocolate Pizza with cinnamon.

Giving guests the opportunity to come together over dessert is also the point of the campfire-style S’mores at George Martin’s Grillfire, with four locations in New York and Maryland. Served tableside, the do-it-yourself dessert comes with all the traditional fixings—marshmallows, chocolate, graham crackers—and a mini flame to roast them.

Diners ordering the Trio of Chocolates for Two at Kellari Taverna, a Greek fish spot on K Street in Washington, D.C., have discussion built in since they will need to negotiate an even split of the chocolate mousse cake, profiteroles with vanilla gelato and mocha pot de crème.

Flat Top Grill’s The Triple Chocolate Storm dessert for two offers more than enough to share. The ample portion includes a chocolate brownie with white chocolate chunks that is smothered with hot fudge and topped with a scoop of vanilla bean ice cream, house-made whipped cream and a sprinkle of chocolate chips. The item outsells all other desserts on the menu.

Offering guests the opportunity to indulge together isn’t the only reason some restaurants are offering desserts designed for two or more.

For Ashley Soto, pastry chef at Founding Farmers, a farm-to-table restaurant with three locations in the Washington, D.C. area, shareable-sized desserts are all about offering great value.

“We try to create the best value out of our desserts, so they tend to be on the bigger side,” said Soto. “At our restaurant, most people share dessert because they are celebrating. Our portion sizes are bigger so you can do that.”

Every item on Founding Farmers dessert menu is sized to share, but especially the Chocolate Mousse Bowl for Two, a salad-bowl filled with creamy chocolate mousse and topped with whipped cream, caramel sauce and hazelnut crunch.