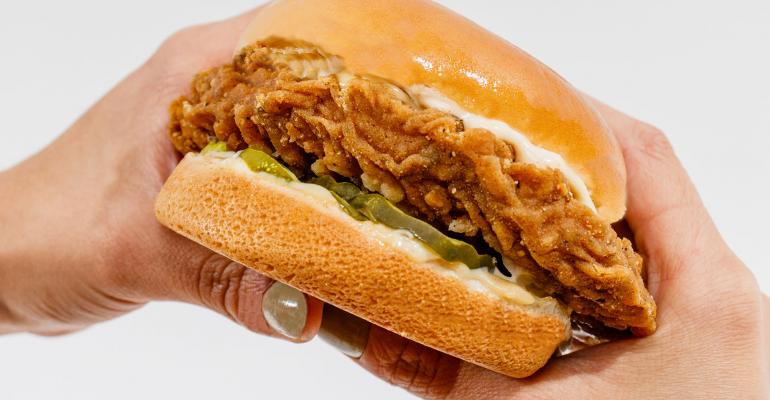 Wow Bao — the fast-casual dumpling brand known for the rapid-fire expansion of its ghost kitchen brands — together with its private equity firm, Valor Siren Ventures, and food manufacturer Golden West Food Group are working with plant-based poultry producer, Skinny Butcher, to bring a product line of plant-based chicken to life. Skinny Butcher was the brainchild of former partners with the Garden Fresh Gourmet salsa brand, who sold the brand to the Campbell’s Soup Company for $231 million in 2019. Valor Siren Ventures invested $10 million to develop Crazy Crispy Chick’n products (from nuggets to tenders to patties), for both grocery retail sale and virtual restaurants.

This will be Wow Bao’s second ghost kitchen brand, after the success of its flagship virtual restaurant, which now has 650 physical and virtual locations. Like Wow Bao’s simple menu of pre-prepared dumplings, president and CEO Geoff Alexander said that restaurant operators will be able to partner with Crazy Crispy Chick’n and receive the frozen fried “chicken” products to stock their ghost kitchen.

Wow Bao has partnered with Reef to launch Crazy Crispy Chick’n nationally via third-party delivery. Alexander is confident that they will stand out in the rapidly expanding market of plant-based quick-service and fast-casual brands.

“I don't know how much the plant-based products outside of [beef] have really grown to market,” he said. “There’s a bunch of chicken nuggets out there, but we’re a standout because we have much more than just chicken nuggets.”

Related: How plant-based menus are changing the perception of fast food

With Crazy Crispy Chick’n expanding beyond the trending plant-based nuggets, Alexander said they opened up an entire category of plant-based chicken meals. The ghost kitchen menu developed by Wow Bao and the Lettuce Entertain You Enterprises chefs includes menu items like Chick’n Parm, jumbo Chick’n Tenders, Chick’n Caesar Salad, Teriyaki Chick’n, Buffalo Chick’n sandwich and Barbecue Chick’n sandwiches that can all be made with the same base protein products.

The chick’n product itself is a proprietary item developed by Skinny Butcher and is made with a “progressive vegetable fiber strain, pea protein, and spice blend” that is breaded and made “crazy crispy.”

“I literally believe of all my heart, if I did one of those commercials where I gave you a real chicken sandwich, and I give you our plant based no one's gonna know which ones which,” Alexander said. “I actually think most people would take ours because the mouthfeel and the texture and the taste is so much like real, superior chicken.”

Currently, Crazy Crispy Chick’n has two locations in Chicago, but he’s confident that they will be able to sign on more operator partners imminently with the goal of opening 500 nationally by the end of next year.

“We’ve created a menu that is 35% food and packaging, and it’s 25% average commission for the third-party leaving 40% profit for the operator,” Alexander said. “We actually think it's better because with a plant-based protein, your sale price to the consumer is generally higher than what they pay for regular protein, so the margins are better.”

With Wow Bao focusing this year on the success of its second brand, Alexander said he would likely wait until next year to develop a third dark kitchen concept.