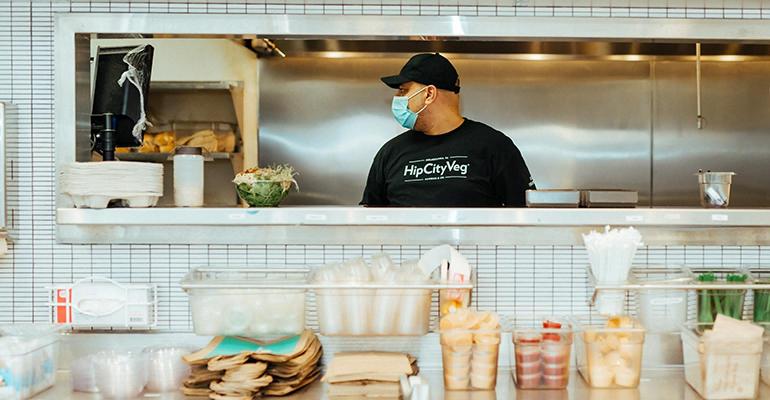 HipCityVeg
Guests are now looking for delicious food that is healthful and not harmful to animals. And they are choosing brands that treat workers well and go above and beyond to protect the planet.
News>Quick Service

How plant-based menus are changing the perception of fast food

Lucas Bradbury of Project Pollo and Nicole Marquis of HipCityVeg share their views on menu prices, delivery and what motivates consumers

As plant-based restaurant concepts continue to scale, the cost of animal-free alternative proteins will soon be able to compete with commodity meats.

So contends Lucas Bradbury, CEO and founder of the San Antonio, Texas-based Project Pollo, and Nicole Marquis, founder and CEO of the Philadelphia-based HipCityVeg, who shared their views about the changing perception of fast food during a webinar Wednesday at the latest session of CREATE, sponsored by BOHA by Transact Technologies.

Related: How HipCityVeg’s parent company is making $15 an hour minimum wage possible at every location

Both Bradbury and Marquis agreed that consumers today want speed and convenience — those aspects of fast food haven’t changed.

But guests are now also looking for delicious food that is healthful and not harmful to animals. And they are choosing brands that treat workers well and go above and beyond to protect the planet.

“We’re seeing so many more people interested in eating at least one plant-based meal a day. And, when that meal is truly delicious, it can open people’s minds to eating two or three plant-based meals,” said Marquis.

But with cost of goods soaring, Bradbury said Project Pollo is making a point not to pass on inflationary costs to consumers so his concept can stay competitive with traditional fast-food players.

“I am not skyrocketing prices due to the inflation we’re seeing in the economy. That is not our guests’ problem, and our guests should not have to pay a higher premium,” said Bradbury.

So Bradbury is relying on scale to help him keep prices low, and the 13-unit chain is gunning to reach a goal of 100 units by 2025.

Project Pollo recently made the switch to a new plant-based chicken called Tindle, which he said is so much like chicken, some vegans have complained.

HipCityVeg has had success with a Beyond Meat smokehouse burger, Marquis said, saying both Beyond and Impossible Foods have hit the right flavor profile, and she sees a lot of room for innovation with chicken alternatives.

“One thing we know about Americans is they love their juicy burgers, their crispy chicken and creamy shakes,” she said. “If they can have that and know it’s good for them and the environment and other living things, they’re thrilled.”

Both chains said the majority of their guests are not vegan or vegetarian, but they are diners who look for brands that support their values.

The fact that HipCityVeg is female-owned is a draw, said Marquis, and the chain made a commitment to raise hourly wages to $15 per hour even before the pandemic. “We decided to take the lead on higher wages for the team because it’s just good for people and good for business,” she said.

Project Pollo, likewise, offers a starting wage between $15-$16 per hour, as well as medical/dental/vision healthcare coverage, paid time off, sick and family leave and other benefits. Decisions that impact workers are put to the team for a vote, Bradbury said.

As the concept grows, it’s vital to stick to core values, he said.

“It’s our people who will lead the future. It’s not me or our senior leadership,” said Bradbury.

A replay of the session can be found at create.nrn.com.