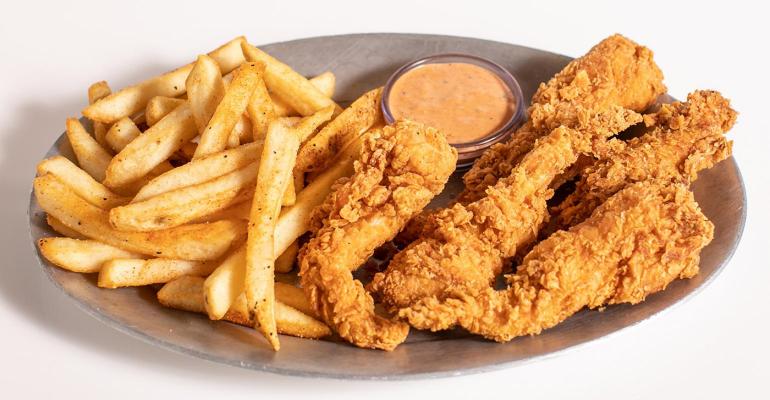 “We’re moving into phase two of the test, which expands to other geographic locations outside of Florida,” a spokesperson said.

The new test areas launched Wednesday, the spokesperson said, and include:

“Our customers and our operators have been very pleased with the test and we’re excited to expand the test to additional areas,” said Michael Stutts, Bloomin’ Brands’ chief customer officer, in a statement.

In September, the Tampa, Fla.-based parent to Outback Steakhouse and other casual-dining brands began offering the Tender Shack menu of chicken tenders and sandwiches prepared in the kitchens of its Carrabba’s Italian Grill casual-dining concept.

The virtual Tender Shack menu was offered from all Tampa Bay-area Carrabba’s restaurants, of which the company has more than a dozen.

DoorDash is offering the Tender Shack menu at prices ranging from $8.99 to $9.99 for meals and $25 for party platters. The Dang Good Seasoned Tender Sandwich or Nashville Hot AF Tender Sandwich, which contain three tenders, was served with fries for $8.99.

In addition to Carrabba’s, Outback and the new virtual brand, Bloomin’ owns casual-dining brands Bonefish Grill and Fleming’s Prime Steakhouse and Wine Bar. The company expanded its mall-oriented fast-casual Aussie Grill to a stand-alone concept with a drive-thru in May.

Dallas-based Brinker, parent to the casual-dining Chili’s Grill and Bar and Maggiano’s Little Italy brands, is offering its virtual brand at 1,050 locations.

Bloomin’ Brands operates more than 1,450 restaurants in 47 states, Puerto Rico, Guam and 20 countries, some of which are franchise locations.