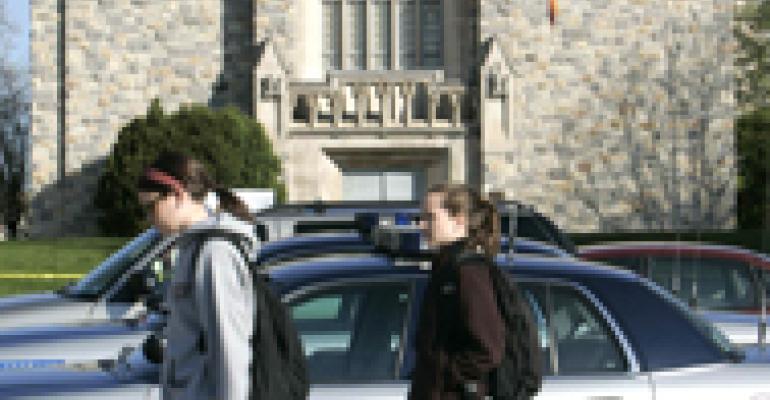 BLACKSBURG Va. Menacing 70-mile-an-hour winds blew through here the morning of Monday, April 16, but the spring day portended only business as usual for residents Robert Coffey and Kimberle Badinelli, both employees at Virginia Polytechnic Institute and State College.

By mid-morning, Coffey, senior associate director of dining services, and Badinelli, associate director of student programs for public relations and information technology, like everyone in Blacksburg and on campus, found themselves in the nightmare now known as the massacre at Virginia Tech. By the time it was over, 33 people, including the lone gunman, would be dead. Among them were four student employees of the dining services.

Well before all the details about the situation were known, business as usual was suspended as Coffey, Badinelli and their staffs shifted into crisis response mode. Amid uncertainty and confusion, and later, an outpouring of horror, anger and grief, they had to focus on a practical matter: providing foodservice to whomever needed it. Containing their own emotions and putting their families' needs on hold, they figured out which operations to open or close, hours of operation, staffing, when to bring in supplies and how to respond to foodservice needs for police, Red Cross workers, support groups positioned throughout campus and the media. By week's end, they began to assess the strengths and weaknesses of their crisis plans before, during and after Monday's campus-wide lock down.

"We haven't yet fully absorbed what has happened here," said Badinelli, speaking three days after the shooting. "We've just begun to realize the enormity of this tragedy."

Coffey, speaking last Friday, admitted they were a "little brain dead" following consecutive 14-plus-hour days. "Everyone in the Virginia Tech and Blacksburg communities is affected. We in dining services lost four student employees. Three of my son's classmates lost parents. We all know someone who has suffered great loss."

When Badinelli and Coffey were asked to retrace the timeline from their own experiences, they apologized for vague answers, saying the hours and minutes had become a blur. Nonetheless, a general sequence of events can be pieced together, which provides insight into the life-changing days of two colleagues who have worked at the university for 22 and 12 years, respectively.

Early Monday morning, Badinelli ran an errand before heading to campus. Coffey dropped off his son at school and, after arriving on campus, began making rounds to visit dining units. They each received cell phone calls from staff members who reported that "an incident" had taken place in the residence hall.

"We didn't know what 'incident' meant," Coffey said. "There had been bomb threats on campus during the past two weeks. We thought perhaps this was another one."

Soon after, Badinelli's and Coffey's departments received calls from administrators who had gone to the residence hall. "The administrators periodically updated us as information was known," Badinelli said. "We soon learned that there had been shootings, and a 'person of interest' was being pursued, but little else was known. As far as we knew, we should proceed with the day as usual." Later, media reports revealed that a lone gunman had shot to death a co-ed and residential advisor in West Ambler Johnston Hall at about 7:15 a.m. Assuming this was a domestic dispute, police secured the site. They began searching for evidence and the 'person of interest.'

At about 9 a.m., Coffey was back in his car, driving near the Drill Field, a large green lawn in the center of the 2,600-acre campus, near the residence halls and resident dining facilities, one of which houses Coffey's office. "I saw police cars moving toward Norris Hall, the engineering building," he said. "Again, I thought there may be a bomb threat here because police were driving at such high speeds. I had a pit in my stomach thinking that maybe this was more than a threat."

Coffey returned to his office and called the dining services maintenance director. "Since an incident on the opening day of school, the head of the maintenance department usually proudly carries a police scanner," Coffey said. "He's not required to bring it, and for some reason forgot it on Monday. So, he made calls to find out what was going on, but not much was known at that time."

Acampus-wide e-mail went out about the shooting at about 9:30 a.m. Students were urged to be cautious and to contact the campus police "if you observe anything suspicious."

Meanwhile, Badinelli and her staff were checking police scanners, watching television and monitoring the Internet for information. Rumors and conjecture began to spread from one end of campus to the other. Badinelli continued to gather and disseminate information as it was received. "In retrospect, I've learned that while it was frustrating not to have had more information from the university sooner, it was comforting to know that when we did get information it was accurate." she said.

Soon after what was still an unclear incident in Norris Hall, Coffey instructed the 11 dining services managers to shift into "limited access" mode. Customers could enter from only one point of access and exit from the same point. All people entering had to show identification cards.

About a half hour later, when some details became known about shootings at Norris, the university sent another e-mail to students requiring them to stay put.

An announcement with the same information was sent over the campus-wide public address system used for emergencies only. The entire campus, including the dining services operations, went into lock down. No one could enter or leave buildings. State troopers stood guard at many facilities, including dining services buildings.

Coffey and Ted Faulkner, associate director of dining services, called each dining services unit manager to explain the lock down requirement. "We still didn't have the full magnitude of the situation," Coffey said. "Our minds were going in several directions. We were concerned about the students and employees and their safety. We also had make sure our operations could provide food and we didn't have any idea how long we'd be in lock down. Neither employees coming in for shifts nor deliveries coming in were allowed onto campus. Even the transit system was shut down."

Staff began taking inventories to determine how much food was available. "We always have enough food on hand for three days," Coffey said. At that point, Coffey and his staff didn't expect food shortages unless the situation escalated to another level.

"Knowing that the campus was in crisis, the catering department immediately began preparing box lunches for police and campus staff who would be working round the clock during the disaster," Coffey recalled. Two hundred boxes with smoked turkey and cheese sandwiches on croissants or rolls, potato chips, cookies and Hokie water - named for the school's mascot, the Hokie - were prepared for immediate delivery. Another 200 were prepared in subsequent hours.

"Over the next several days, dining services provided water and supplies wherever they were needed," Coffey said. Dining services provided a few menu items for the "Today" show crew, which broadcast from West End Market dining service facility on Wednesday. The cost of the food provided throughout campus has not yet been determined. Suppliers, campus groups, churches and local organizations also provided food when needed.

During lock down, Coffey, Faulkner and Rick Johnson, director of housing and dining, also brainstormed "what if" scenarios. If the dining facilities were to open in four hours, how many might come in? If the lock down was lifted in the afternoon, how many students would show up for dinner? And who would prepare and serve the food? Students compose 75 percent of dining services' workforce and are indispensable, particularly during the evening meals when staffing is almost exclusively by students. Would they come to work?

"We tried to find out which members of the non-student staff could come in or stay on if they were already here," Coffey said. "Everyone stepped up in this time of crisis. They were willing to do whatever was needed. Nearly everyone stayed at work and said they would work as long as they were needed. Those who were scheduled to come in said they would be here. We told them we understood if they couldn't come in or had to leave."

During the lock down, foodservice continued. "There were few people in the dining facilities at that hour," Coffey said. "We gave those who were here whatever they needed. They didn't want much to eat or drink. They were much more concerned with trying to get information from the televisions in the units and their laptops."

From the moment incidents began on campus, employees were encouraged to call their families and take care of personal matters. "I, too, called home and left a message for my wife," Coffey said. "I told her I was in a 'situation' and probably couldn't pick up our son in the afternoon. She later complained that I didn't leave much information. I just didn't want to give misinformation." After she received the message, Coffey's wife called extended family members to let them know he was safe.

Badinelli made calls to her husband, son and a few family members. "I remember apologizing for not being able to talk very long," she said. "I wanted the family to know I was okay. But then I had to get back into work mode. We were all operating on adrenaline mode and just had this gnawing feeling that we weren't doing enough to help, even though there wasn't anything needed that we weren't doing."

Lockdown was lifted in early afternoon after officials determined that the shootings had ended.

That evening, Coffey recalled, "We squeaked by for dinner." All but one dining facility remained open. About 20 percent of the student workforce came to work. Dinner traffic was nearly 75 percent of normal.

On Monday night, Badinelli volunteered at the campus call center until about 1:30 a.m. Coffey worked on campus and returned home "very late." Functioning on almost no sleep and still charged with adrenalin, Coffey returned to campus on Tuesday morning at about 5 a.m. Badinelli arrived at 7 a.m.

"We knew classes were cancelled for the entire week, so our customer count would be lower than usual," Coffey said. "However, there was no way to know how many would stay on campus. We did suspect that many students would stay at least through the convocation service held on Tuesday afternoon. We called our suppliers and they assured us they were willing to adjust orders and deliveries in any way necessary."

All facilities on Tuesday remained open for about two-thirds of their normal operating hours. "We put out a standard and didn't want to back off now," Badinelli said. Coffey estimated that the units had about 35 percent of the normal customer traffic. About 15 percent of the student employees came to work.

Also on Tuesday, Badinelli's department sent out e-mails to all students working in dining services expressing concern for their wellbeing. No mention was made of coming to work.

On Wednesday, Thursday and Friday, dining operations also stayed open for about two-thirds of their normal operating hours. Some units were closed. Customer traffic remained at about 20 percent on Wednesday, 15 percent on Thursday and 10 percent on Friday. State troopers were again stationed in all the dining halls and residence halls.

Badinelli and members of her staff volunteered at a picnic sponsored by a student group on Saturday afternoon. She also helped make commemorative ribbons for foodservice employees to wear during the weeks following the crisis.

"What seems incredible is how foodservice employees can respond under such duress," Badinelli said. "Considering what was going on, it's to their credit that the needs of the campus were met, students were fed and foodservice didn't miss a beat. It seems that there's nothing that foodservice people can't do."