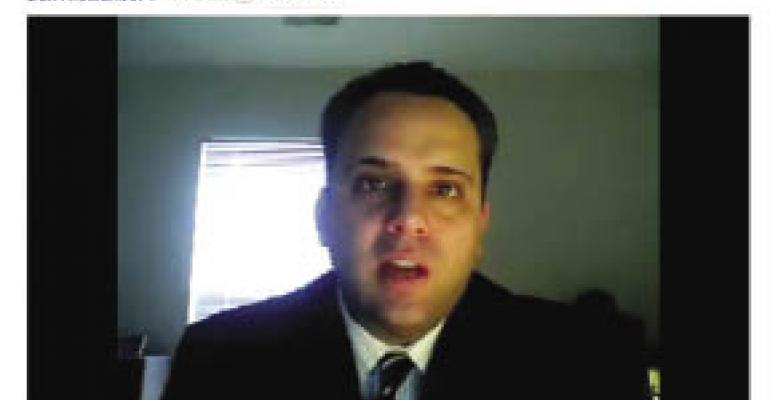 Despite 10 years of restaurant management experience and 23 total years in the industry, Daniel Colangelo struggled to find work after losing his job when the Morton’s The Steakhouse in Southfield, Mich., closed last June. After six months, Colangelo did something he never thought he’d do — he made a video of himself and posted it on an industry recruiter’s website. That led to three job offers, one of which he accepted six weeks later.

“The market now is just flooded with résumés and applications,” said Colangelo, who is an assistant manager for a Buca di Beppo restaurant in Columbus, Ohio. “Doing the video introduction brings your application alive and sets you apart from the competition.”

Video introductions are gaining a foothold in restaurant recruiting practices as computer webcams, inexpensive video cameras and digital cameras with video functions make it easier for job seekers to make recordings and post them on social sites, such as YouTube, and recruiting sites, such as HireMeNow.com and Hazooka.com. At the same time, operators are finding videos to be an effective tool for pre-screening candidates.

“I may interview someone or have a general discussion or review a candidate with someone via the Internet, using some kind of interactive technology,” said Estelle Wright, vice president bd’s Mongolian Grill in Burnsville, Minn. “I do believe it’s the way of the future.”

Bd’s recruiters found Brent Brayer’s résumé and video introduction at YellowDog Recruiting.com, a recruiting website for the hospitality industry. Brayer was hired as a general manager for the make-your-own-stir-fry chain not far from the corporate office.

“Brent has a great personality, and he came across very well,” Wright said. “I’m not sure you always get all the nuances in video, but he captured our interest and we wanted to meet this person after also looking at his résumé.”

Restaurant recruiters and hiring managers said they look for a candidate’s sense of energy and passion in the videos, something that is not clearly evident in a résumé or application.

“We get buried with résumés,” said Rick Cherra, Kansas City, Mo.-based director of recruiting for Buca di Beppo, which is based in Minneapolis. “When you are recruiting nationally, you do not get to see all the candidates in person. It’s helpful to see what they are about, to see their energy level.”

Hospitality workers generally have personalities amenable to video introductions and are not afraid to make videos or talk about themselves, said Scott Rosenburg, managing partner of Yellow Dog, which is based in Fort Lauderdale, Fla.

Since launching the video introductions in late 2008, Yellow Dog has posted more than 100 videos. When video candidates get hired, their vignettes are filed under a “recently adopted” category on the website. The site averaged 3,000 hits in August.

Like many recruiting firms, Yellow Dog charges employers for its services, but the video posting is free to job applicants. Yellow Dog gives advice on what to wear and lighting, and the rest is up to the applicant.

Still, some industry consultants worry video introductions can backfire on applicants, and that video conferencing may be more advantageous for job seekers and for operators.

“This sort of thing worries me,” said Carole Martin, a former human resources professional who is an author and president of www.interviewcoach.com and an interview expert for Monster.com. “There is discrimination. Discrimination comes on every level, not just racial but fat, thin, old, young, ugly, beautiful. There are all kinds off prejudices.”

Employers can minimize risks by not asking candidates for photos or videos of themselves, and by being consistent in recording reasons why they do not choose to interview or hire someone, Schroeder said.

A better route for both employers and job candidates may be video conferencing and video interviews, advised Amanda Hite, chief executive of Talent Revolution, a recruiting and branding consulting firm for the hospitality industry.

Internet voice and video software such as Skype.com give candidates and employers the chance to interact visually as part of the initial interviewing process, Hite said.

“I’d recommend having the manager and candidate meet in a video chat room where they can look each other in the eye and have a conversation,” she said. “It’s like being in person for an interview. It can replace that initial phone interview.”

A growing number of companies “are starting to require a Skype interview as the first step in the hiring process so they can do a virtual in-person interview,” said Patrice Rice, president of Dunkirk, Md.-based Patrice & Associates, a recruiting firm specializing in the restaurant and hospitality industry.