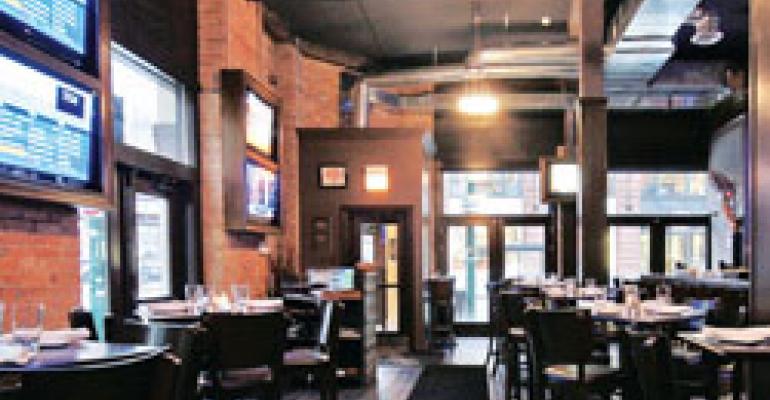 Having found a happy medium with its first concept, Bull & Bear—an upscale sports bar with an average check of $25 to $30—the principals of Twilight Traffic Control LLC in Chicago didn’t want to stray too far when building their next restaurant. But once their new place, Public House, gets off the ground this fall, they’re looking to spread the company’s reach beyond its home city.

Bull & Bear opened in January 2009 and was TTC’s first restaurant concept, offering an unpretentious atmosphere for gourmet bar bites and lots of beer, some of it served from pay-by-the-ounce taps built into the table. The company also operates the Stone Lotus nightclub.

Originally, TTC planned to expand just Bull & Bear to other neighborhoods and nearby cities, but when a 13,000-square-foot space at State and Kinzie streets they’d coveted for years became available, they quickly secured the lease. They then realized the location required a restaurant different from Bull & Bear.

“It’s such a massive downtown location that we knew it had to have the vibe of a big, energetic hall with a lot of beer and food and energy,” Rekhson said, “and that’s where the Public House name and concept came from.”

Public House—which carries the trademarked tagline “Grill. Tap. Happy Place.”—indeed will have a lot of beer. TTC plans to have 99 taps, including 50 at the bar, several on the wall and a few dozen at special table-tap booths like the ones that have been extremely popular at Bull & Bear.

TTC aims to open Public House by the fall and another location of its concepts, likely Bull & Bear, by the first half of next year. The real estate TTC can secure will determine whether it opens another unit of its existing concepts or a new brand.

“It’s easier to create a concept for a location than to find a location for a concept,” Stoioff said. “I don’t necessarily know how we’ll feel when we go to San Diego and see some oceanfront property. Do we see a Bull & Bear or some dumbed-down flip-flop concept?

We’ll get that intuition when we see it.”

Public House’s menu will incorporate some smokehouse and rotisserie elements into its American-grill lineup. It also will have beer pairings and use suds in several entrées, such as beer-braised meats.

Public House should cultivate a slightly higher average check than Bull & Bear, Stoioff and Rekhson said, since its menu is weighted more toward entrées than the upscale bar food and bites at its sister concept a few blocks away.

“We love the fact that Public House is close by, even though lot of people would say there’s risk of cannibalizing yourself,” Rekhson said. “It’s all about developing a critical mass in one area. Bull & Bear doesn’t have a lot of private-party capability, so we want to push a lot of that to Public House.”

Public House also would serve more tourists, given its location next to several hotels, Stoioff said.

The TTC principals said there also would be enough of them to go around as they find and train local management for running restaurants in new states. They are recruiting local investors in target cities to join their current backers, Rekhson said.

Because TTC’s private investors put a premium on profit-ability, the company incentivizes managers, servers and kitchen staff to grow sales and take ownership of events at Bull & Bear. If line cooks find ways to save money on food costs, they make more money, Rekhson said.

Bartenders, servers and managers are put into teams to compete for sales goals against coworkers, and prizes range from complimentary trips to working a prime section for a week.

The TTC principals want those service and operations practices to unify the system as it grows over the next few years, no matter how many cities or new concepts it takes on.

“We want to balance ingenuity and innovation with being smart and sticking with what works,” Stoioff said. “Replicating existing concepts that are proven, we’ll be doing that all the while, while trying to find other locations and opportunities for new concepts.”—[email protected]