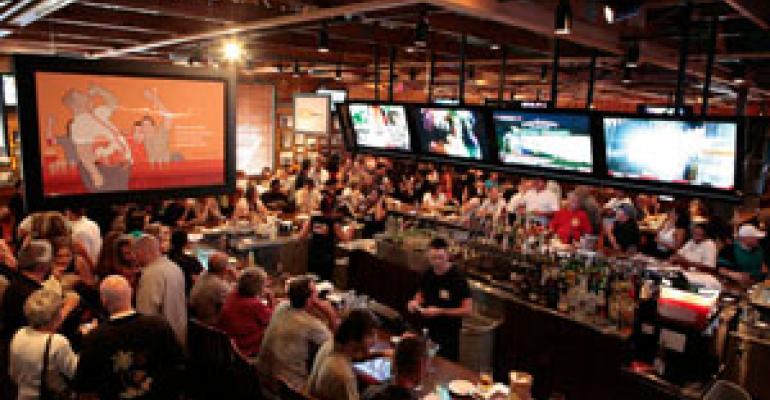 Smokey Bones ready to roll out its redesign

ORLANDO Fla. Smokey Bones plans to extend its remodeling program to the entire 68-unit chain this year after seeing higher check averages at 10 of its already revamped stores.

Executives at the chain describe the remodeling as a “multi-million dollar” investment in the brand, though they declined to specify the amount chainwide or per store. So far, the remodeled locations are based in Florida, Illinois, Indiana, Maryland, Massachusetts, Michigan and New York.

In addition to a name change from Smokey Bones Barbecue to Smokey Bones Bar & Fire Grill, the remodeling initiative includes an enhanced bar area and extended hours aimed at building late-night sales -- "a whole new daypart that we haven't had in the past," said Ian Baines, president and chief executive of the chain.

Click here to see before and after photos of Smokey Bones' makeover.

“Overall, sales are up double-digits at a time when casual-dining is down,” Baines said.

Darden Restaurants Inc., which debuted the Smokey Bones concept in 1999, closed 56 of the chain's units in May 2007 and put the remaining 73 up for sale. The remaining restaurants were sold in December 2007 for $80 million to Barbeque Integrated, an affiliate of the private-equity firm Sun Capital Partners.

The remodeling program began in August 2008. Peter Bell, vice president of marketing for Smokey Bones, said the remodels focus primarily on interior changes, the most visible of which is the removal of the chain's mountain lodge decor.

“The other changes are more cosmetic,” he said. “We invested money in the artwork on the walls with what we call ‘Boneisms,’ or edgy-fun statements.”

Like many casual-dining chains, Smokey Bones saw an opportunity for sales growth in the bar, which is now more separate from the dining room. For example, Baines said, televisions throughout the restaurant are now concentrated in just the bar area. The remodeled restaurants also stay open later, closing between midnight and 2 a.m., depending on the market.

The chain has also added to its appetizer menu, which it promotes during late-night hours. Among the new appetizers are Pretzel ‘Bones’ with three dipping sauces and chicken wings that are smoked and then deep-fried and topped with a Memphis barbecue seasoning.

“If you want to increase your bar business, people want to snack more," Baines said. "We have created more appetizers than we had in the past, and those are perfect for sharing.”

“When appealing to people who want to come to a bar, they want to socialize," he said. "It’s much easier and more comfortable to socialize and chat with some friends at a table if it’s a high-top. You are looking at people at eye-level.”

Bell added that the bar atmosphere appeals to the chain’s target demographic of “social starters,” which he defines not as a specific age group, but rather people who are looking for a place to go out and “a leader in their group of friends about making decisions where they want to go and where they want to try new things, experience new foods or looking for a late-night promotion.”

“The remodel is really the icing on the cake for all the work we’ve done with the brand over the past couple of years,” Baines said. “We worked very hard on the menu, building on our heritage of slow-smoking, and adding on our grilling with a lot more steaks and seafood on the menu.”

Baines said the company also worked to re-energize its staff, calling employees “fire starters.” In addition, one employee at each unit is designated to take care of social media, such as website pages, photographs.

Typical Smoke Bones units are 7,200 square feet, with about a third devoted to bar area. Average seating is 230.

While initial renovations required closure of restaurants, they can now be finished within three to four nights during closing hours, Baines said.