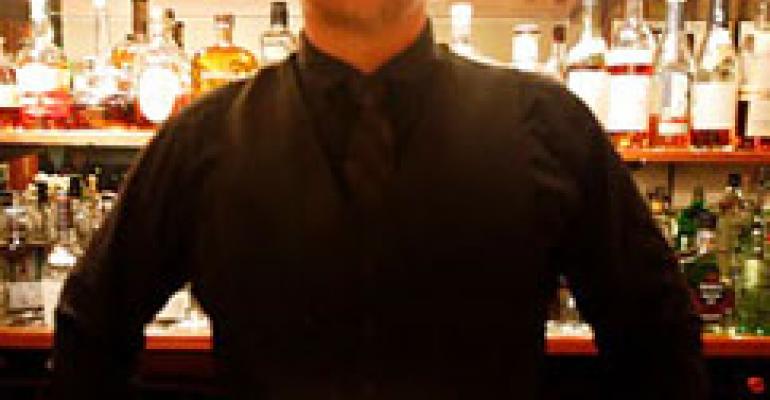 Jason Robey, the new mixologist at Michael's in Santa Monica, talks about how gardening is part of his job description

When Jason Robey was brought onboard to head up the new “farm-to-glass” mixology program at Michael’s in Santa Monica, Calif., Michael’s owner Michael McCarty was impressed that Robey knew his way around planting rows and pulling weeds as much as he knew his way behind the bar.

“He’s a mixologist and a master gardener,” McCarty said of Robey. “I respect people [who] take the time and effort to do that. I’ve had a vineyard since 1985, so I was very excited.”

When he first opened Michael’s in Santa Monica in 1979, McCarty was a young restaurateur who wanted a venue where he could focus on quality ingredients and where the source of these ingredients was known before they arrived on guests’ tables. He was active in helping start the Santa Monica Farmers Market, which the restaurant still sources ingredients from to this day.

At the urging of his daughter and son, he met with bartenders and sampled drinks to update the cocktails at Michael’s, which featured an award-winning wine list but served mostly Mad Men-era classic cocktails that McCarty saw his parents drink, such as martinis and Negronis.

McCarty recognized a drive and attention to detail in the people he met; their passion for cocktails reminded him of himself and his love for food and wine when he opened Michael’s.

“They were around the same age as [I was] when I started. I was 25,” McCarty said. “It was exciting to see this wasn’t just a trend or fad and that these were extremely intelligent people.”

So McCarty tapped Robey to not only create a cocktail program that would dovetail with the restaurant’s longstanding farm-to-table philosophy, but to also oversee the planting of a garden on the restaurant’s roof, which is a restaurant-wide project that will service both the bar and the kitchen and is bringing the two back-of-the-house teams together.

Robey, who previously worked at establishments such as New Heights in Washington, D.C., and Bar and Kitchen in downtown Los Angeles, is only in the first weeks of planting the garden and planning his menu. He hopes to use the rooftop garden as much as possible, while supplementing ingredients that are hard to maintain in a rooftop garden, such as citrus, from the Santa Monica Farmers Market.

How did you get into gardening?

I have very green thumbs. I’ve always found gardening to be meditative for myself, even before I was using it in a professional manner. When I lived in New York, I lived in this brownstone that had this amazing letter-E-shaped roof that I utilized as a garden space. … I was producing more vegetables and aromatics than I could use, and I was giving stuff away.

How does your interest in gardening work with bartending?

For all of us that have taken [cocktails] seriously … it’s about the ingredients, knowing where that ingredient came from and making it taste as good as possible. I think that’s where I started taking things seriously. It’s the same with food. I love to cook; I’m very passionate about it.

[The addition of the garden] makes for a long day. The dinner shift starts at six, and I’m usually here by 3 [in the afternoon]. We’re trying to incorporate an irrigation system for water, and the soil needs to be turned. … It will not be as hands-on once things start fruiting.

An hour a day is a good time to spend up there, especially once [responsibilities] spread amongst the staff. It can be pretty relaxing to head up to the roof and take a half-hour break. I want everybody to get involved; it’ll make it less work at the end of the day. … The boys in the kitchen are stoked.

What are some examples of crops you have growing?

Four types of basil, three types of thyme, 10 different types of peppers – both sweet and spicy – rosemary, sage and lavender. You name it, it’s up there.

Do you know how your drink program will be shaping up based on the garden?

I’ll be surprised on a weekly basis with what I get to use that’s fresh. It’s almost like forced creativity. That need to use, that need to cut back or trim back for a beautiful product, it’s a necessity in the creative process.

The cocktail menu that I’ve put together has eight drinks, and I’ll keep it that way. Two drinks will be seasonal and market-driven. The rest will be variants of classics and really fresh, inspired drinks. I’m keeping the menu small like that.

What are the benefits of having your own garden to pick from for the bar?

You can put aromatics and herbs in the general reference of coffee. Coffee in bean form in the freezer can last for a while, but as soon as you grind that bean it starts losing flavor. It’s very similar to herbs. Once you pick it, it’s dying, so you have to use it as quickly as possible.

Another big thing is there’s a lot less waste. You can’t tell how much greenery you’re going to use in a week. With a garden we can pick them as we need it. You’re wasting a lot less. … We might start doing our own composting, and we’re recycling ice as much as possible to water the roof.

Do you plan on making your own bitters with the aromatics you grow?

I haven’t gotten around to bitters yet. One thing I’m really focused on is gin. … Doing gin with tonic flights, picking a gin to serve with one of six different tonics. … Later I might take a stab at making my own bitters with aromatics from the roof.

Michael's also has a New York branch that opened in 1985. McCarty said that a rooftop garden is not in the future for the New York location, but the restaurant will work with the Union Square Greenmarket for its cocktail program revamp.