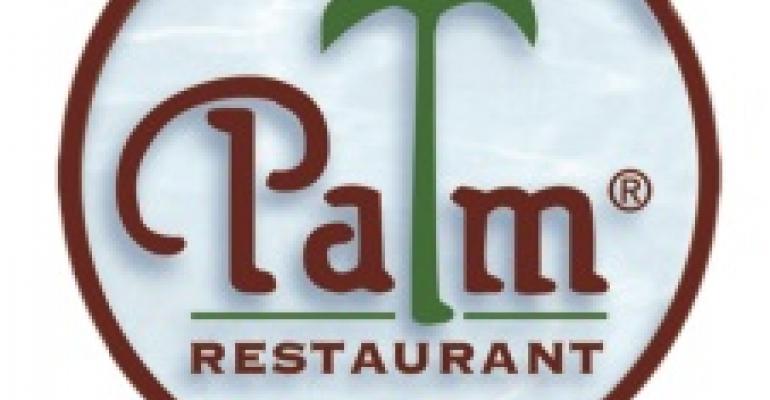 Palm Management Corp., the parent of the luxury steakhouse chain based in Washington, D.C., is refreshing the brand as part of its 85th anniversary celebration this year.

The chain also is designing a new prototype to use as a launch point for future growth. Bruce Bozzi, Jr., executive vice president and fourth-generation owner of the 28-unit brand, said the new prototype design will be tested when the Palm moves its Boston location to a new address next year. The new design will be applied to new and existing units, he said.

“We really wanted to retain all of The Palm’s signature elements — from the caricatures on our walls to the signature dishes on our menu — but also take a deep look at our brand from all angles to identify ways we could enhance The Palm experience for guests,” Bozzi, Jr. said in a written statement.

“With our 85th anniversary taking place this year, the time was right to reintroduce The Palm to the world and establish a connection with the next generation of patrons.”

The physical menu itself also has undergone some changes. The old paper menu has been replaced by a hand-printed menu encased in brown leather and accompanied by a leaflet featuring facts about each Palm location.

• Tableware. Changes include redesigned dishware that will carry the new Palm logo and new wine decanters.

• Uniforms. Servers will now wear tan jackets embroidered with their first names and years of service, while server assistants will wear white shirts with black aprons.

• Website. The revamped website features new food and lifestyle images, as well as the new logo and color scheme.

While the luxury steakhouse segment — which also includes Morton’s, Ruth’s Chris and Fleming’s Prime Steakhouse & Wine Bar — was hit hard by the recession, segment leaders have begun to report a turnaround in business.

Palm Management Corp. generated revenue of $107.8 million in 2010, an increase of 8.3 percent over $99.5 million in 2009, according to Nation’s Restaurant News’ Second 100 census of chains and companies in the foodservice industry.

The privately owned The Palm restaurants chain was founded in 1926 in New York by Pio Bozzi and John Ganzi. The chain is still owned and operated by members of their families.