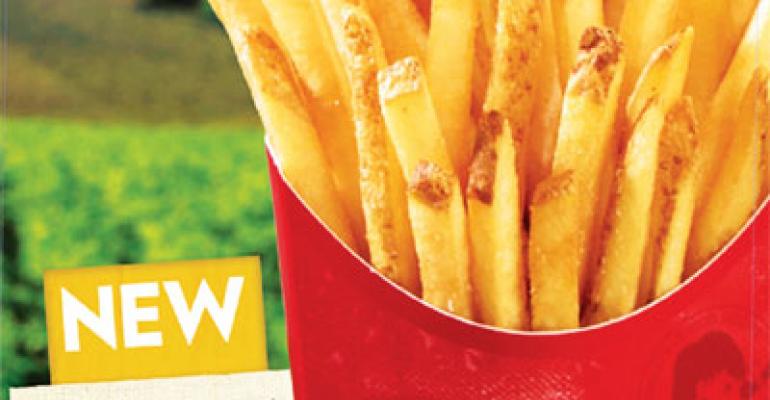 Operators are responding to consumer demands for “real” foods with a focus on high-quality, nonprocessed items and marketing campaigns highlighting these natural ingredients.

“[Customers] are paying much more attention to ingredients than ever,” said Denny Lynch, spokesman for Wendy’s. “They want ingredients they can find in their kitchen cabinets, not in a lab.”

Wendy’s recently overhauled its French fries in favor of the new skin-on Natural-Cut Fries, which are dusted with sea salt after frying. Lynch said the company’s real food brand position, which includes the tagline “You Know When Its Real,” came about as a result of research of 10,000 consumers.

The result of the demand has been a flood of marketing campaigns and products focused on a feeling of authenticity.

“It is becoming the norm for the industry,” said Arjun Sen, president of Restaurant Marketing Group in Centennial, Colo., which publishes a consumer perception study called Food Actually. Sen added that not everyone defines “real” food the same way.

Chipotle has long touted its natural ingredients through its Food with Integrity campaign. Subway’s “Eat Fresh” tagline highlights its produce and bread baked in-store. Recent McDonald’s ads have focused on the freshness and simplicity of its ingredients with attractive food shots as part of its What We’re Made Of initiative. And Domino’s recently launched behindthepizza.com, a website that features an interactive map of the United States on which visitors can learn more about the farms and dairies that produce the chain’s ingredients.

Sizzler, too, has taken a back-to-basics approach with its food. Kerry Kramp, chief executive officer of Sizzler, based in Culver City, Calif., said the 180-unit chain’s new menu focuses on made-from-scratch items, a return to the chain’s early years. “We went back and said, ‘What were those original ingredients?’ Did they change because there was a better flavor or because someone decided to lower the cost,” he said.
Kramp said one benefit to preparing items on-site is that customers can smell the foods’ aromas, adding to the dining experience. Also, kitchen staff prefer to work in kitchens with skillets and measuring cups, not frozen soup that needs only to be thawed.

The chain discontinued menu items that were too costly or labor intensive, such as meatloaf, so the staff could focus on steaks and salad bar items. “We initially got pushback from franchisees,” Kramp said, adding that eventually they agreed to the changes.

“Consumers can taste the difference,” said Todd Conger, chief executive and president. “It also gives our servers confidence that any item they suggest to meet someone’s personal preference will be made with fresh, high-quality ingredients.”
But the effort to showcase natural ingredients can sometimes be challenging and costly.

For Chris Kastner, chef and co-owner of CK’s Real Food in Hailey, Idaho, real food means local food. The challenge, he said, is to find vendors who offer non-hot house produce. “It requires a little bit of phone work,” he said. His food costs are about 28 percent.