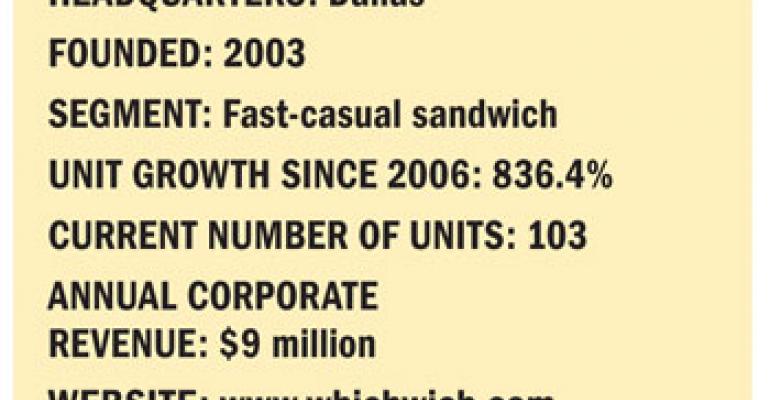 Which Wich, the fastest-growing restaurant concept in the study, has expanded more than 800 percent to more than 100 stores since it debuted in 2003.

Created by Jeff Sinelli, who also co-founded Genghis Grill and Burguesa Burger, Which Wich serves a simple menu of sandwiches, shakes and cookies. The concept is known for its unusual ordering process: Customers grab a paper bag, which has the menu printed on it, and use a marker to make their selections for breads, meats, cheeses, toppings and spreads.

When asked about what has driven Which Wich’s success, Sinelli said it has been the power of the brand itself – "the brand magnetism."

"In a down economy, those are the types of concepts that rise to the top," he said.

"We see an opportunity here," he said, referring to the weakened economy. "There is opportunity to find great hires and great franchisees, especially those looking for a genuine franchisor."

Nation's Restaurant News named Which Wich a Hot! Concept in 2007, when it had 30 stores. In an interview at that time, Sinelli said Which Wich's ordering style and its "edgy" vibe help set it apart from other sandwich chains. A successful concept, he said, needs "transaction combined with interaction, plus entertainment."

Today, Which Wich is continuing to find new ways to interact with customers. When a customer suffered lockjaw while taking a bite of the chain's signature Wicked sandwich earlier this year, Which Wich turned a situation into a branding opportunity. The company worked with the customer to create an online video and contest to rename the sandwich.

"From the company’s perspective, we saw it as an opportunity to talk with a guest and to create a 'Which Wich Wow' moment and also use social media through Facebook, Twitter and also our own blogs and intranet," Sinelli said.