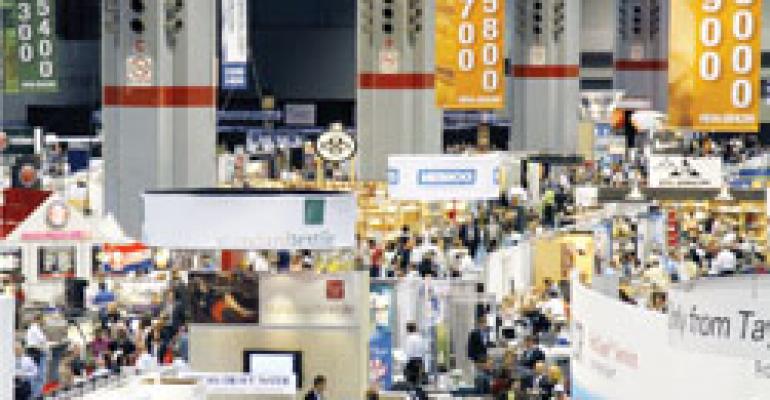 Nearing showtime in the Windy City

Restaurateurs working to rebuild recession-battered sales and traffic are looking for a return on investment as they travel to this year’s National Restaurant Association Restaurant, Hotel-Motel Show.

With many businesses still feeling the lingering effects of the recession, cost-conscious operators say they are approaching the outing strategically, with an eye toward making sure meetings with vendors and research into new technologies and equipment will pay off by boosting sales, productivity, customer counts and/or margins.

“I need to know personally that there’s value to my time and the money spent,” said Anissa Mandell, director of purchasing for Tappan Street Restaurant Group, operator of the Taco Mac sports-grill chain, based in Atlanta. “To book a flight and be away for three days, I have to ask myself whether I’m going to get something out of this that makes it worthwhile for me to attend.”

Mandell, who tries to attend every year, said she constructs a game plan on how best to approach the show.

“I usually look at who’s there, who I want to target, who has something really interesting,” she noted. “Then I plan my time accordingly. If, for instance, I want to put together a deal for fry oil, I’m going to target some of the major players in that game and set my personal agenda based on what my needs are at the time. I usually use a full day to plan those meetings and then the next day walk the show as if I’d never been there, looking at every individual booth and seeing what opportunities are there.”

She notes that the NRA show, which will be held May 22-25 at McCormick Place in Chicago, is the one place where she is certain to make at least one helpful connection for her business.

“It’s an opportunity to network with new suppliers,” she said. “Inevitably, there’s always a new innovator out there that gives me that ‘wow’ moment where I say, ‘Why didn’t someone else ever think of that before?’ We all want to be ahead of the curve; no one wants to be behind.”

A common goal for many attendees is to rebuild the customer traffic that has fallen precipitously during the past few years. Many also are looking for ways to increase their cost efficiencies.

“I’d be lying if I said I wasn’t looking for that magic pill that will transcend the guest experience,” said Jay Grossman, owner-operator of Two Steak and Sushi restaurant in New Hyde Park, N.Y., and Four Food Studio & Cocktail Salon in Melville, N.Y. “As a restaurateur, you’re always looking to find that next best thing, and networking [with competitors] is a way to find out about what’s great, what’s working.

“The show affords me the opportunity to do that,” he continued. “But when I find that thing,” he said, laughing, “I’m not sharing it.”

Grossman said he is interested in learning about socialmedia marketing techniques as well as searching for a gift idea that would show customers his appreciation for their patronage.

“Finding a way to go beyond good food and service, show guests our appreciation, maybe with a tchotchke or gimmick, will make them feel good,” he said. “If I can take that away from the show, a way of making others feel good, it will be worth the flight and the money.”

For Eric Ersher, chief executive of Zoup! Systems, parent of the 22-unit fast-casual Zoup soup chain based in Southfield, Mich., attending the NRA show is a “team event.” This year he is bringing four other Zoup executives with him, and each is tasked with bringing back what Ersher calls “the one thing” that will help the company prosper and offer up the trip’s ROI.

“We go as a team even though we may have different agendas once we get there,” he said. “We’re going together, but we’re attending different learning events. We’ll get together in the evenings.”

He added: “We’ve got this thing where when we go, we need to find one thing. [Attending the show] is a substantial expense from an operational standpoint and also as a direct expense. So everyone on the leadership team has to come back with one thing—that’s why we call it ‘The One Thing.’”

The One Thing varies year to year, Ersher said.

“One year it was finding a private-label vendor for water bottles,” he said. “Another time it was regarding a new POS platform. Once it was finding a specifically purposed, in-store marketing piece needed for a rollout. Everyone always comes back with one thing. Some are more powerful than others, but everyone is obligated [to find something].”

Ersher noted his group also was looking forward to educational sessions focused on social media and would be looking for potential deals related to nontraditional venues.

“As operators, we need to be on the front end of [the socialmedia learning curve],” he said. “It’s the ante to play.” He also said he would explore new technology, geared specifically toward improving training.

“It’s hard to quantify the cost of having five of us in Chicago and not in the stores or the office, providing support,” he said. “But certainly the objective is to get better, faster and stronger by spending time at the show.”

Peter Riggs of Pita Pit will have menu labeling—and calorie posting in particular—in mind as he explores the show.

“We’ve got about 175 stores across the U.S., and every time we introduce a new menu item there’s a lot of logistical planning that goes into how best to display that,” he said. “We’ve been doing a lot of research on the new menu-labeling laws, and we want to see what other concepts are doing and figure out what the best execution is.”

As far as the digital menu boards go, “my IT guys have been bugging me to take more meetings about it,” he said. “The technology has been out there for a while, but hasn’t gained much traction yet. But given the legislation, we’ll look at it and see if there’s practical application for our brand.”

He added that the menu boards also would appeal to the chain’s main demographic: 18- to 24-year-old males. Roughly half of Pita Pit’s stores are located around college campuses, and the flash animation on the computer screens would make for “a more immersive experience for them,” he said.

For Riggs, one of eight Pita Pit officials attending the show, the possibility of discovering new equipment that increases productivity while decreasing operational costs is the biggest justification for the trip. One of the group’s priorities will be finding technology that will help the chain prolong the shelf life of the pita bread it serves systemwide.

“Believe it or not there is not a lot of specific equipment to prolong the shelf life of pita bread,” he said. “Often we have to look at other equipment, like the kind used for buns, that don’t work well with pita, but maybe we can adjust it to suit our needs. It’s a very delicate product with specific handling procedures that must be followed in order for the bread to be the best it can be. That’s why we’re always looking for new equipment that is going to prolong its lifespan.”

Frank Scibelli, owner of Mama Ricotta’s, Cantina 1511 and Big Daddy’s Burger Bar in Charlotte, N.C., said he, too, is interested in finding equipment for a new Tex-Mex concept he is planning to open soon. He said he usually goes to the NAFEM show to purchase equipment, but this year, because the timing of the NRA Show is closer to the opening of his new restaurant, he will look for vendors willing to negotiate equipment package deals while he is there.

“I think we have an opportunity to negotiate deals directly,” he said. “The economy is still down, and vendors are not moving [as much] product. I think as we move forward—and there are so many unknowns right now—it’s important to be as efficient, as tight of an operation as possible.”

Scibelli said he is confident he will find the equipment he is looking for. He noted that he always finds something when he attends the show.

“We always find stuff,” he said. “We have our burger concept—Big Daddy’s—and a couple of years ago we negotiated meat deals [that allowed us to] use hormone-free, grass-fed product, Niman Ranch stuff we didn’t know we could get and use. Finding that meat was a big deal.”

Equipment and foods are not the only products on display during the conference, however. Ron Lynch, president of Tilted Kilt Pub & Eatery, the 15-unit Scottish-theme casual “breastaurant” chain based in Tempe, Ariz., said the company’s franchise exhibit has achieved great exposure on the show floor.

While Lynch is quick to point out he has not signed any franchise deals at the show, the chain has received somewhere in the neighborhood of 20 inquiries afterward.

“This will be our fourth year [as an exhibitor], and it has really gotten our name out there,” Lynch said. “We have a display booth that kind of depicts the inside of a pub, beer on tap and a couple of our servers dressed in costume so people can get an idea of what Tilted Kilt is. There are people who have called us and said they saw us at the NRA show. It’s put us on the map a little bit.”—[email protected]