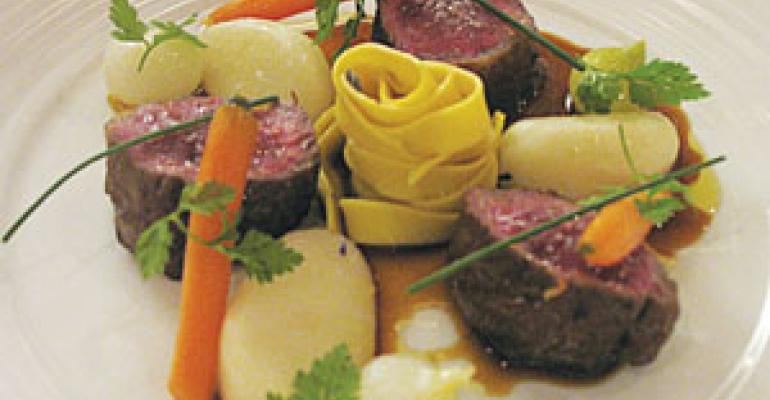 On the Menu: Maze

The city of Prague is known for its many attractions—gorgeous architecture, fine music and excellent beer—but fine dining is not one of them. That is something Gordon Ramsay would like to change.

Last November, he opened a branch of his Maze restaurant, located on the ground floor of the Hilton Old Town hotel, just a few steps from the medieval maze of the city’s ancient core. The first two Mazes are in London and New York.

In this respect Prague still is a work in progress. To be fair, much has changed since the fall of communism in 1989, when restaurants were little more than prettified government canteens staffed by surly zombies. Service has improved immeasurably, and trendy restaurants now feature French, Italian and eclectic contemporary cuisine. Last year the Italian-theme Allegro restaurant in the Four Seasons Hotel even scored the city’s first Michelin star.

Still, this is not a country of obsessed food bloggers and celebrity chefs.

“The hospitality industry doesn’t get much media here,” says Phil Carmichael, the British head chef of Maze Prague. “There’s no cooking shows on the telly. It’s not a part of society yet, like it is Britain.”

So why take a risk on Prague?

“It’s an up-and-coming city,” Carmichael says. “It’s one of the destinations in Europe now, for tourism but also for business, and it has a massive American expat population.”

The Ramsay organization got a deal from Hilton Blackstone—the company declines to cite numbers—which had recently renovated their city center property and was looking for a high profile restaurant to locate there, “so we thought, ‘Why not?’” Carmichael says.

The restaurant, designed by David Collins, creates a sexy atmosphere, in an art deco, ocean liner sort of way. Its sleek lines and palette of black, grey and glass also echo of the design of many of Prague’s prewar cafes. The menu is very loosely based on the dishes at the other Mazes. However, the local team had to adapt it considerably to cater to Czech expectations.

At both the London and New York Maze, the concept is to assemble a multicourse dinner of many little dishes. In Prague, the Ramsay team decided to stick to an à la carte format, fearing that a progression of smaller dishes would be too foreign compared with the local way of eating. Traditional Czech restaurants tend to serve great hunks of roasted or stewed meat crammed onto a plate with even larger portions of potatoes and dumplings. All the same, the tasting menu wasn’t entirely ditched in the new location. A seven-course, “Classic Menu” of small plates is offered in the evenings.

The style of cooking, in Prague as in London and New York, reflects Gordon Ramsay’s contemporary French approach as well as the influence of Jason Atherton, the executive chef of all the Maze restaurants and an alum of the avant-garde kitchen of El Bulli in Spain. Thus the summer menu features a classic roast rack of lamb with lamb confit, but also a dish of daurade with candied eggplant that flirts with molecular gastronomy.

Here and there, the chefs have also added a Czech accent to some of their culinary language. Dumplings are still out, but there are plenty of hearty meat dishes on the menu. The winter menu featured pork cooked three ways; the summer menu had pork belly with lentils. Czechs often eat duck with braised red cabbage, so the restaurant did a similar dish but puréed the cabbage.

“It’s gone down like a storm,” Carmichael says. “In the press, they’re calling it modern Czech cuisine. It’s not really. It’s flavors they’re used to, we’ve just twisted them a little bit”—something that is still a rarity in the Czech Republic.

Even with the accolades, getting established has not been without its challenges. When the restaurant opened, Carmichael brought over five Ramsay alumni to man the stoves. Carmichael himself has worked for the company for about four years. The rest of the kitchen was local and there was a learning curve, not so much with the language as much as the post-communist work ethic.

“Over here the employee is very spoiled in terms of what he can expect from the employer, with regards to working hours, pay, holidays,” Carmichael says. “A lot of them don’t understand why they should stay when the kitchen needs them.”

As a result, a lot of staff left in the first few months. On the other hand, the ones who stayed show great promise, Carmichael says, and he has every intention of leaving the kitchen to a Czech chef when his gig is up.

Another unfortunate legacy of the communist past is the web of purveyors the restaurant depends on. The locally sourced ingredients just aren’t good enough. So, meats are shipped in from Germany and France.

Carmichael recalls hearing about a Czech farmer with a herd of Aberdeen Angus beef.

“I thought, wow, fantastic,” he says.

But then he found out that the cattle are slaughtered just two days before they come to market. The beef is neither hung nor aged. He imports British beef or American beef, “which I think is ridiculous,” he says. As a result, the food cost is actually higher than in Britain.

Still, Carmichael tries to keep the prices reasonable. A set lunch menu of three courses is about $36, which is roughly in line with lunch at the London and New York Mazes. Nevertheless, given that the average Czech earns less than half of his American counterpart, it’s hardly cheap.

Some 80 percent of the clientele is Czech, the chef estimates, a much higher number than the team originally expected.

The British chef is optimistic about the future.

“The whole Czech Republic has a done a fantastic job raising itself up,” he says.