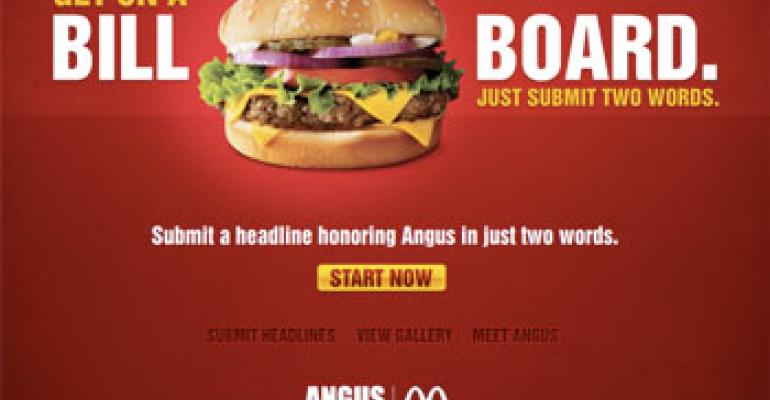 KANSAS CITY Mo. Breaking away from the pack of businesses trying to advertise across the small screens of phones and computers, McDonald’s operators here recently asked patrons to submit two-word slogans about the chain’s new Angus Third Pounders, which were then broadcast on towering digital billboards.

Click here to view a slide show of the McDonald's billboard slogans.

Representatives of Lamar Outdoor Advertising of Baton Rouge, La., said McDonald’s rented the company’s 13 programmable signs in Kansas City for 24 hours on Sept. 24. Among the myriad of messages displayed on the billboards were “Magnificent Mouthful” and “Dinner Winner,” said Bob Fessler of Lamar, which operates 1,100 digital billboards nationwide. The displays also included images of the Angus Third Pounders and the first name and last initial of a slogan's author.

In all, Bates said, the promotion netted about 6,000 slogan submissions -- the majority by unique visitors versus a small number of individuals making multiple submissions. All the submissions could not be used for the billboards for logistical reasons, he indicated, so McDonald’s representatives selected what they deemed to be the 1,750 best word pairings.

“We wanted to give customers a chance to interact with the brand and have some fun with a great new product,” Bates said of the promotion’s goal. He said the campaign story was picked up by some media outlets and “there was a lot of buzz in the market [when] we turned all of the digital billboards into Angus boards.”

Bates said the interactive billboard campaign, or the concepts it relied on, may be applicable to other markets where McDonald’s is endeavoring to interact more with guests in ways they prefer, such as St. Louis.

Participants in the promotion created by Kansas City-based Bernstein-Rein Advertising submitted their two-word slogans online at www.honorangus.com or by texting them to a campaign address. The approved submissions were posted in the website’s “gallery” area.

“This campaign gave us the ability to talk about the post-purchase of the Angus Burger product,” said Vernon Williams of Bernstein-Rein. “Using their opinion of the product after they tasted it will be a powerful influence on others to make a purchase.”

The Kansas City McDonald’s operators supported the digital campaign with radio spots and coordinated the daylong outdoor campaign with local events in the market as part of "Angus Day," which included activities co-sponsored by the Midwest Dairy Association. After extensive testing, McDonald’s in August rolled out the Bacon & Cheese, Deluxe, and Mushroom Swiss Angus Third Pounder burgers across the chain’s U.S. system of about 14,000 restaurants.

Lamar Outdoor officials said the company used its year-old iSpot technology that relies on RSS feeds to “scrape” information from the HonorAngus website for broadcast on the large outdoor billboards, which changed their message every six seconds. That same technology is used to automatically send news headlines, sports scores and weather updates to digital billboards for other clients, they said.

The bill to McDonald’s franchisees for the Kansas City billboard rental came to $35,000, Lamar sources indicated. But they noted that most clients would not contract to control an entire market and added that normal deals vary in price based on location, number of spots broadcast and campaign length.

McDonald’s officials declined to discuss other costs related to the campaign.

Bates of McDonald’s said it is “hard with something like this [promotion]” to quantify the results, but noted that, in a general sense, such exercises demonstrate the chain’s desire to “stay in front with technology” and “look for unique and different ways for consumers to interact with the brand.” Such demonstrations are particularly important, he noted, when it comes to winning share of mind among younger patrons, many of whom “probably never pick up a newspaper, but are very online and Facebook savvy.”