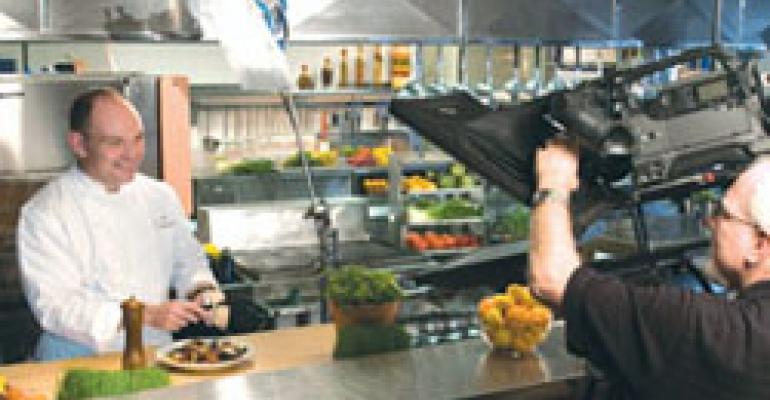 Agrowing number of operators are producing short videos for the Internet in an effort to attract the throngs of potential customers surfing the Web for news and entertainment.

The videos, which are less expensive to make than traditional advertising, are usually three-minutes long or less and can be posted on company websites and integrated with other digital promotions. They also can find homes on such popular sites as , and . Most important, their success is easier to quantify than traditional ads, operators say.

The first video focused on cocktail education and was hosted by beverage director Varja Stratigo. La Tavola’s executive chef also recently prepared one of his dishes on tape. Once produced, the videos are posted on Fifth Group’s website and and embedded in press releases and e-mail blasts.

Kukler and his team are still learning about production and how to keep the videos to three minutes or less. “This is not too difficult with cocktails, but not so easy in food prep,” he said.

Fifth Group already was seeing good results from its e-mail marketing, so videos were a natural progression, said Kukler, who noted he is able to quantify how many people have viewed his videos online.

“With the online stuff, when we do a promotion, our phone starts ringing and we know why,” he said.

The group also is posting videos on and Myspace at .

The videos, which are produced by an outside company, feature chef and co-owner Jean-Robert de Cavel giving guided tours at Jean-Robert at Pigall’s, Pho Paris and JeanRo Bistro, all in Cincinnati, and the Greenup Cafe in Covington, Ky.

“We are getting positive feedback from customers,” said Annette Pfund de Cavel, de Cavel’s wife. “We think the videos are bringing in those that might be on the fence between us and somewhere else. And it helps us compete with the chains who can afford more ads.”

Brad Inman, chief executive of Turnhere Inc., a three-year-old Emeryville, Calif.-based company specializing in video production, said his network of independent producers has made videos for thousands of local restaurants.

“This allows them to compete on the same level as chains, giving small businesses access to television-quality ads,” he said.

Don Tillman, owner of ChikaLicious in New York, said that except for online videos, his 19-seat dessert and wine-pairing restaurant does not advertise. The videos feature shots of ChikaLicious’ open kitchen and the preparation and presentation of desserts and wines by chef and co-owner Chika Tillman.

Turnhere produced ChikaLicious’ first video close to two years ago, and today the videos are on Youtube, AOL video, Google video and other sites.

“We are always packed, and we definitely feel like the video gets us customers, because you cannot explain in words what we do,” Don Tillman said.

Frank Betz, owner of Trilogy, a restaurant offering steak and seafood with a Southern flair in Marietta, Ga., launched a video about the restaurant on its Myspace page in February at .

“We are getting a fantastic response from our video and other postings on our Myspace page,” Betz said. “It is great—basically free advertising. Most people coming to the site are clicking on the icon to see the video.”

Betz can choose which customers to send coupons for a free appetizer based on their profiles, for example, those who are female and aged 25 to 35.

Shane Touhy and Scott Black, co-owners of the 150-seat Dogwood slated to open in Atlanta in June, are chronicling the space’s construction on video. The video will be downloaded to and on the restaurant’s blog and website.

“We feel like it will create a buzz for us, and is costing us nothing extra, really,” Touhy said.

Seven-unit Seasons 52 has produced close to a dozen videos since last summer. The videos are posted on the corporate website as well as on .

Deborah Robison, the concept’s director of media and communications, said that since more people are relying on the Internet to make dining and cooking decisions, the company saw the opportunity to use the media to feature the brand’s culinary and wine expertise and to become more interactive with customers. The videos are regularly integrated into other forms of digital communication the brand uses, she said.

“We have an e-mail newsletter with direct links that take customers to website videos,” she said. “As it drives more people to our website, and it is doing so, they can also make reservations and discover event info.”

The videos feature Clifford Pleau, the chain’s director of culinary development, and the brand’s master sommelier.

“This advances our guests’ connection to our healthy-lifestyle brand,” Pleau said. “Teaching them how to cook healthfully at home is the next natural step.”

The three- to four-minute videos focus on a wide range of topics, from holiday entertaining with seafood to how to buy the freshest seafood at the market.

The videos put a human face on Red Lobster, said Wendy Spirduso, communications director for the brand. “People have a lot of questions about cooking and preparing seafood,” she said. “We feel like our chefs—the seafood experts—have a lot to share with the Internet community, and this gives our chefs a chance to interact with other seafood lovers.”

Spirduso added that the videos have been so successful the company now is producing 30- to 60-second how-to videos on topics such as how to use marinades and spice rubs with seafood, how to cook scallops, and how to cook lobster.

Twenty-three unit Bahama Breeze recently launched on its website bimonthly videos featuring its chefs discussing topics related to the Caribbean. The videos also appear on Youtube and as podcasts on iTunes. The brand also unveiled a “Why I Need a Caribbean Escape” video contest at , which started Feb. 26 and ends May 12.

Mike Bernstein, director of media and communications, said the videos help to demystify Caribbean food. He noted that it is too soon to quantify results, however.

“We haven’t necessarily cut back on our traditional advertising,” he said. “We see this as an adjunct to that and a way to expose the brand to potentially thousands of consumers in a more engaging, interactive way.”

Meanwhile, Kukler of Fifth Group said his company used to spend $200,000 annually on traditional advertising, but that has changed.