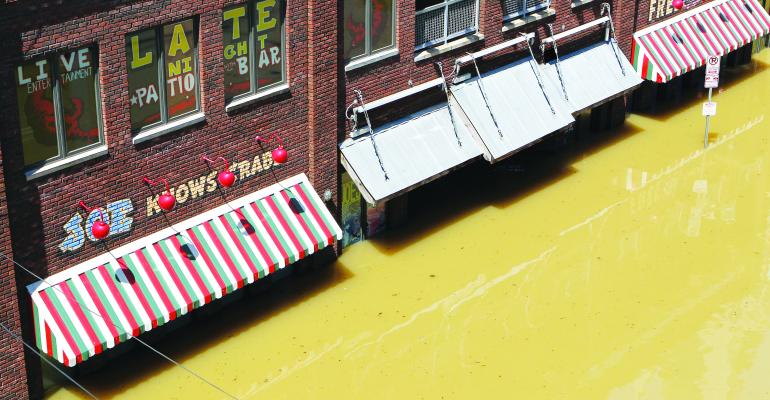 A flood of support

Restaurateurs pitch in to raise funds for Nashville disaster victims

As Nashville begins to recover from what some have described as the worst flooding in decades, restaurants and hotels are not only open for business, but also are helping raise money for those who suffered losses during the disaster.

Some 54 restaurateurs in the area banded together May 17 to participate in “Eat Out Nashville,” a fundraising event that generated thousands of dollars for people in need. Participating operators donated 50 percent of the proceeds from one night of sales at each of their establishments. The funds were presented to the Tennessee Hospitality Association May 20 at a gala event. The association will distribute the money to the local agencies, organizations and charities assisting flood victims.

“We had everyone, from fine-dining restaurants to fast- casual places participating,” said Doug Hogrefe, owner-operator of Amerigo restaurant and a co-creator of the event. “It dawned on me that instead of everyone doing something individually, we should come together and pick one night and donate the evening’s sales.”

Although the total tally was not available at press time, Hogrefe said his restaurant “raised $10,000 alone and expects [that participating restaurants] raised well over $100,000.”

Nashville was hit hard earlier this month when storms dumped 16 inches of rain on the city over a 34-hour period, and caused the Cumberland River to overflow. At least 28 people died, and countless homes and businesses suffered structural damage, reports said.

“We had a one-in-one-thousand-year event,” said Mike Kelley, owner-operator of Jimmy Kelley’s Steakhouse in Nashville. “Nothing like this has ever happened before, especially since the [Tennessee Valley Authority] dams were built. Thankfully, most of the damage was limited to part of the city. There was flooding downtown, near the [Cumberland] River, but everything has reopened. People have really been pulling together to help each other.”

Kelley said he was luckier than most because his restaurant experienced little damage and was able to stay open the entire time.

“Several restaurants were closed for a couple days,” he said. “The worst power outages happened on [the] Monday [right after the rain]. But all the electricity came back on [a few days later]. We didn’t close at all, but it definitely was inconvenient. Some roads were closed.

“The main thing is music is playing again in Nashville,” he said.

Tom Negri, managing director of the Loews Vanderbilt Hotel in Nashville, said the city has experienced billions of dollars in damages, and the recovery would be long term. He noted that the tab for initial relief efforts by the Red Cross already has totaled more than $5 million.

“We’ve been affected across the board — businesses, communities, apartment [complexes] and homes,” he said. “We’ve had billions of dollars in damage, but we didn’t blink an eye. We have seen Southern hospitality at its finest in what has been a dire situation.”

In addition to a number of restaurants, several tourist attractions also were affected, including such famous mainstays as the Grand Old Opry and the Gaylord Opryland Resort next door. According to the reports, the resort was hit by 10 feet of water and will not be taking any reservations until October while repairs are being made. The Grand Old Opry House stage also was submerged under two feet of water.

Kelley said the city has been the recipient of many donations from around the state and country. And, he added, residents have gone out of their way to help each other during this time of need.

“The outpouring of help has been incredible,” he said.

Cracker Barrel, the 593-unit family-dining chain based in Lebanon, Tenn., organized several fundraising events to help employees, residents and disaster relief organizations dealing with the fallout from the floods.

Spokeswoman Julie Davis said Cracker Barrel issued a series of “gold cards” offering employees and regular guests at affected stores complimentary meals. The company also is making a cash donation to Hands On Nashville, one of the organizations involved in the disaster relief efforts. It also started up Cracker Barrel Cares Inc., a nonprofit corporation supported by company employees to assist other Cracker Barrel team members in need.

“We’ve sent e-mails and posters to all stores letting employees know they can contribute over the next two-week period, tax deductible, to a central fund that will be used solely to provide flood relief to affected employees,” she said.

Davis said the company was “very glad that no Cracker Barrel employees were injured and no stores sustained serious damage.”

Other chains, such as O’Charley’s and Stoney River Legendary Steaks, also donated funds to flood relief charities. Parent company O’Charley’s Inc. said May 20 it would donate 10 percent of its online and in-restaurant gift card sales through June 30 to the Second Harvest Food Bank of Middle Tennessee and the American Red Cross Disaster Relief Fund.

“It is really amazing to see the excitement from those who are able to serve,” Negri of the Loews Vanderbilt Hotel said. “This really is a fabulous community.” n