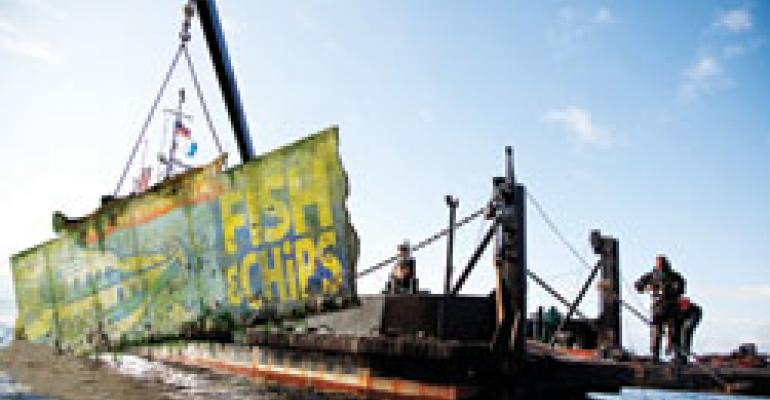 For eight weeks beginning Aug. 22, Seattleites followed developments tied to the discovery in Elliott Bay of three underwater billboards for Ivar’s Inc. restaurants that apparently dated back to the 1950s.

Ivar’s president Bob Donegan and local historian Paul Dorpat indicated that archival documents revealed the company’s late founder, renowned prankster and promoter Ivar Haglund, might have ordered the signs sunk for the benefit of future commuters who preferred submarines to cars or ferries.

The prolonged public interest was spurred by media coverage of the fantastic tale as well as Ivar’s pseudo-documentary content at its website, billboard-related TV advertising, the distribution of so-called replica billboards, discount promotions, contests, and sales of novelty T-shirts.

On Oct. 19, a broadcast of KING 5 TV’s “Evening Magazine” made clear the billboards story was fabricated by Ivar’s with help from its creative agency, Heckler Associates, and its public-relations firm Wilson Public Relations. As it turned out, the TV show was not an exposé but rather Ivar’s planned exit strategy from the high-stakes stunt.

Reaction to the promotional ploy was negative in some quarters, with historian Dorpat taking heat along with Ivar’s management for his complicity in the ruse, good natured or not.

Donegan said he responded to everyone who complained to the company.

One of the favorable posts at the Seattle Times website read: “Talk about merchandising genius! Ivar Haglund passed on his penchant for the ridiculous and the sublime, and thank God there is still someone out there with some imagination.” Another: “This hoax didn’t hurt anybody. And you got a cup of the best clam chowder for 75 cents! A bargain!”

“The ones who get it, get it,” Donegan said. “If we offended anyone, we’re sorry.”

Donegan said “very rough” business numbers for the campaign period of Sept. 9 through Nov. 22 indicate the chain sold 304,000 more cups of chowder during that time frame in 2009 than in 2008. He said it gave away 28,000 kids’ meals, or about three times the number it sold during the same span a year earlier.

Supposedly inspired by two of the discovered billboards, Ivar’s offered a bowl of chowder for 75 cents, which represented a discount of up to 81 percent, depending on the restaurant concept involved. It also offered a free child’s menu entrée, normally $4.95 to $7.25, with the purchase of a regular entrée.

“It looks like it was worth about 5-percent-higher customer counts and slightly more in [incremental] sales,” Donegan said.

Creating and executing the campaign cost about $200,000 before the expense of food discounts.

Billboard-caper planners constantly asked themselves, “Is this in the spirit of Ivar?” Among their key goals, Donegan said, was “to sustain believability for as long as possible.”

On Aug. 21, Seattle Times photographer Dean Rutz stumbled onto what appeared to be a billboard-salvage operation on Elliott Bay, but which was actually a mock recovery for video taping purposes.

“When the Times broke the story on Aug. 22, we thought the whole thing was done,” Donegan recalled. “But fortunately, it continued through Oct. 19, when Evening Magazine revealed it. That was far longer than we expected it to go.”

Doug Brody of Seattle “communication design” and branding agency Heckler Associates for some time had swimming in his head a fantasy about the discovery of underwater billboards linked to client Ivar’s, a company steeped in humorous advertising and marketing traditions.

“One of the great things about underwater billboards,” he said, “is that you don’t really have to put them down there; you just have to say they were down there.”

Initial discussions about the campaign began in February, said Brody, who served as creative director and writer, and planning started in earnest in July.

Brody said the scam required the building of only one full-size billboard, which was to be dipped in and out of the bay to simulate a successful salvage effort. The other two were created out of thin air using Photoshop.

Jack Barrett of Seattle’s Wacko Films was involved in the on-and underwater video shoots staged for TV ads and website streams that ostensibly showed the recovery of one of the signs.

Brody said the unexpected Times photo coverage forced pranksters into action three weeks early, but also “changed the dynamics of the campaign because to have it in the newspaper accelerated believability.”

All along, Brody said, “we were really counting on the buzz, as we had a fairly bare bones media buy [budget].” He pointed to the Ivar’s website as “the hub.”

“Whatever little piece [of the story] someone got, whether it was from radio or a billboard, they could go to the website and get the whole thing [explained] and tell a friend,” Brody said.

Publicists normally are paid to get the word out, but Wilson Public Relations principal Tamara Wilson said keeping things quiet was the hardest part of her Seattle firm’s role in the Ivar’s billboard hustle.

“The main challenge,” Wilson recalled, “was selecting a media partner” that would be in on the prank from the outset, but agree to “keep this story confidential.” “We found a great one” in NBC affiliate KING 5’s Evening Magazine, she said.

Her company needed to work with such a “media partner,” Wilson said, because Ivar’s wanted to use a television feature about the company’s heritage of promotional pranks as the framework within which to own up to the stunt when the time arrived. That approach was seen as preferable to offering up an Ivar’s executive as a talking head for evening news stories about “a hoax,” she said.

Wilson PR joined the project Aug. 4 and its first chore was to determine when to “let the cat out of the bag” and then “work backwards to [establish] when we’d first publicize the ‘find,’” Wilson explained.

Among other duties, she noted, her firm developed tactics to support the ad campaign, advised prank principals how much to divulge to the media, monitored billboard-related consumer chatter on the Internet and elsewhere, and created press releases.— [email protected]