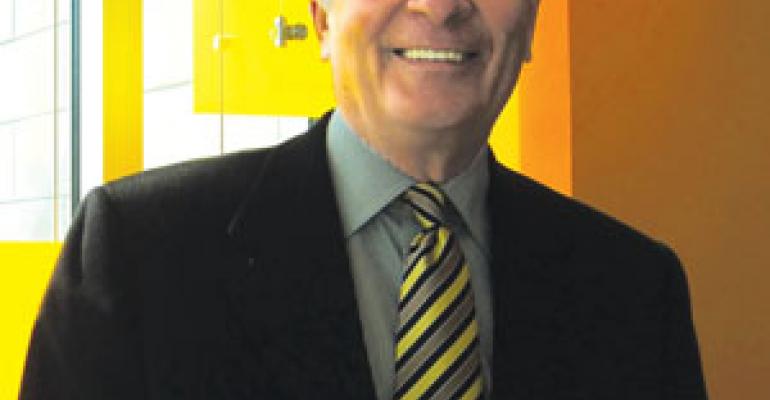 On the Cutting Edge; Foodies in Suits: Jon Luther

Jon Luther, chairman and chief executive of Dunkin’ Brands Inc., regularly gets locked out of the corporate test kitchen he envisioned and built.

The research and development team “actually precludes me,” Luther says.

But he doesn’t mind, because his enthusiasm for new products can be hard to contain at times.

“They’re afraid I’ll find something and tell somebody,” Luther says.

“He’s involved in so many interviews, and things that are really exciting can easily slip sometimes,” says Joe Scafido, who, as Dunkin’ Brands’ chief creative and innovation officer, controls the kitchen lock. “So it’s better off that he doesn’t know.”

“Everything that comes out of here, I’m in the final taste panel,” Luther says. Since taking the helm in 2003, Luther has grown systemwide sales for Dunkin’ Brands, which includes Dunkin’ Donuts and Baskin-Robbins, by approximately 50 percent to $6.6 billion at the end of 2007.

After assembling a culinary dream team, Luther “gets the hell out of the way.”

“If you start to challenge by committee,” he says, “you’re dead.”

Billy Jacob, who recently left his director of culinary development and executive chef position at Popeyes Chicken & Biscuits to become a franchisee of Five Guys Famous Burgers and Fries, previously worked for Luther at Popeyes and says his former boss doesn’t micromanage.

“He’s brilliant,” Jacob says. “He has a Ronald Reagan-like character. He surrounds himself with great people.… He’s a great visionary and has a real feeling for what the customer is going to like.”

“He has a very good palate, which is not typical for CEOs,” he says, adding that after testing products with consumer panels Luther listens to the results rather than relying only on his taste.

“When you are ready to commercialize it to the consumer, that is when I like to step in because I think my palate is pretty good,” Luther says. “I think I represent a lot of mainstream [people] too, because of where I came from.”

Luther, 64, grew up in what he describes as the “projects” in Tonawanda, N.Y., near Buffalo. At the time meals weren’t a priority.

“I grew up on meatloaf,” he says. “It wasn’t about quality. It was just getting food on the table.”

Luther says his tastes developed while in college at Paul Smith’s College in Paul Smiths, N.Y., where he earned an associate degree in hotel and restaurant management.

“I became fascinated about the culinary side of the business,” he says. “I have the deepest respect for chefs,” he adds, noting a particular interest in the creative process that goes in to developing dishes.

After a stint in sales at contract feeder Aramark, then known as ARA Services, Luther ended up running that company’s luxury-restaurant division, which included the Carnelian Room in San Francisco and The 95th in Chicago, during the late ‘70s and early ‘80s.

“We had world-renowned chefs working for us,” he says. “I went to Paris and actually recruited chefs. I got more and more involved in the food side.”

Luther next landed in the airport business as president of CA One Services. Long before eating local products became fashionable, he brought in local restaurateurs, including Wolfgang Puck, to open locations in terminals and give travelers a sense of where they were.

“We changed the game,” he says.

Then as president of Popeyes Chicken & Biscuits, “the first thing we did was to go back to that great Louisiana Coast, New Orleans’ wonderful cuisine. I said, ‘How can I bring that to fast food?’ We turned that [chain] around based on the quality of the food.”

“If you are going to run a company that is involved in food, food better be the star,” Luther says. “Because in the end of the day companies rise or fall depending on what the consumer loves about your brand beyond the ambience and service levels. They come back because of the food…and we never lose sight of that. What are you going to finance if you have a bad menu?”

But great tasting food isn’t enough on its own. Frankenthaler says Luther further demands that products deliver profits and are quickly executable in a fast-food setting, which can prove challenging because Dunkin’s nearly 14,000 locations around the globe.

“If a franchisee doesn’t make money, why would we do it—no matter how good it is,” Luther says.

Luther excitedly speaks about Dunkin’ Donuts’ new Oven-Toasted menu with Hash Browns and Flat-bread sandwiches, particularly the Turkey, Cheddar & Bacon. The flat-bread sandwiches meant to boost after-morning sales are “groundbreaking for us,” and a bit of a risk since they are not breakfast fare, Luther adds. Still the initial consumer response has been “extraordinary.”

The flat breads may soon expand with a Southwest chicken flat bread that is the best seller of a line currently in test. A rendition sampled at Dunkin’s test kitchen included Colby-Jack cheese, a touch of barbeque sauce, roasted peppers, caramelized onions and the chicken on a flat bread that was lightly spiked with chile powder and herbs, including cilantro.

Luther doesn’t spill the beans when pressured for exact numbers on flat-bread sandwich sales. Instead the chief executive says the line, “appears to be working very well for us,” and notes that the cost of the new ovens in which to cook them was noticed by franchisees.

Unable to contain himself when asked about future rollouts, however, Luther says: “I’m particularly enamored by what we’re doing internationally. The green-tea and black-tea lattes in the Asian countries [such as Korea and Taiwan] are very successful. So we can bring some of those here as we expand out beverage platforms.”

Scafido confirms a line of “better-for-you” beverages is scheduled to roll out in June. More healthful items introduced throughout the menu with debuts planned through August will follow those drinks.

“Some will be reduced sugar, [others] lower fat,” he says. “It will really run the gamut. There’s something for every category.”

“The country is now ready for this,” Luther says. “I’m not talking about alfalfa sprouts. I’m talking about products that are better for you with less sugars and fats, but are still flavorful.

“People are very [health] conscious today,” he adds. “Over the next 10 or 15 years I think you’ll see that trend evolve pretty significantly, and we’re prepared for it.”

Luther says he’s constantly cognizant of his own diet constraints.

“I don’t eat doughnuts every day,” he admits.

On a normal weekday he eats mostly salads, fish, chicken and vegetables for lunch and dinner after a breakfast of granola, fresh fruit and yogurt.

“I spoil myself on weekends,” he says.

At home he occasionally grills, but he eats out most days.

His favorite restaurants include Alta Strada and Blue Ginger, both in Wellesley, Mass.; The Grill on the Alley in Beverly Hills, Calif.; and Milos in New York for Greek cuisine.

“When I want to go for good comfort food, I go to Not Your Average Joe’s,” he says, adding with a smile, “I like to be a regular, so I can get a seat.”

Luther says his son, also named Jon Luther, cooks like a chef at home and is a restaurant reviewer for Charlotte magazine. The senior Luther jokes that the culinary talent “skipped a generation” in his family.

Spending time with family is one of Luther’s major priorities, he says, and when he’s dining out with his five grandkids they often visit Dunkin’ Donuts.

But he’s not ready to turn in his corporate leadership role for full-time babysitting duties anytime soon.