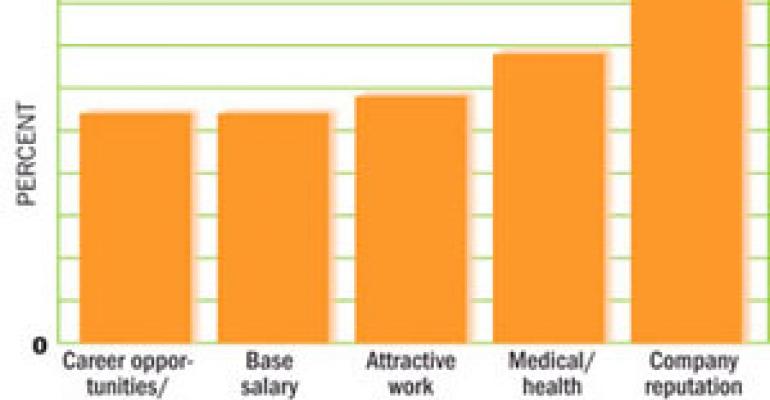 CRCA report: Reputation, not pay, matters most for retention

With rising minimum wages equalizing pay rates among restaurants, pay is becoming less of a factor in attracting hourly workers, said operators, who noted they are looking for other ways to recruit and retain their workforces.

A recent study by the Hay Group for the Chain Restaurant Compensation Association found that a company’s reputation was a leading factor in recruiting both hourly and managerial employees. Other important factors included benefits, work climate, culture and flexible hours.

With the federal minimum wage reaching $6.55 per hour in July and given that 32 states have even higher minimum-wage rates, restaurants do not have as much flexibility for additional pay incentives, said Maryam Morse, a consultant for the Hay Group.

“Premium pay over the minimum wage is not as compelling an employment proposition,” Morse said. “From this study, one of the top reasons people go to a company is the company culture.”

Even in a down economy, where escalating labor and food costs have forced some chains to close units and lay off employees, recruiting and retaining remains a challenge, said compensation and HR managers and executives.

“Employees may be more cautious in considering job changes based on the ever-increasing number of layoffs and store closings,” said Wendy Harkness, vice president of CRCA, a group of more than 100 restaurant companies that strive to improve compensation practices by pooling data. “However, companies are particularly vulnerable to losing top employees in a challenged economy.”

Top performers typically know their worth and can leverage that with employers looking to upgrade positions, said Harkness, who is also vice president of human resources for Checkers Drive-In Restaurants Inc., the Tampa, Fla.-based owner or franchisor of about 830 Checker and Rally’s Hamburger units.

“You have to develop a compelling employment brand,” she said, “not just to fetch the brightest and newest, but also to keep the ones you have today.”

Employment branding is similar to marketing a concept to customers, but the focus is toward creating an image of the restaurant as a desirable place to work.

The Recruiting and Retention Spot Survey questioned compensation and HR officials from 25 CRCA member companies who represented 15,000 restaurants and 240,000 employees. The majority of participants were from quick-service concepts.

The median revenue among the participants’ companies was $271 million; the median systemwide sales figure was $400 million.

The study, which looked at factors driving recruitment and retention for hourly and management employees, concluded that much of what drives people to a company and keeps them there has increasingly less to do with compensation.

Besides a company’s reputation, medical and health benefits and then base pay were important recruiting factors for regional and district managers. Company reputation, benefits, and an attractive work climate and culture ranked above base salary for restaurant managers, while top concerns for hourly employees were company reputation, attractive work climate and culture, and flexible work hours. Base pay did not occur in the top five recruiting factors.

Pay is rarely the No. 1 motivator in staying at a job, said CRCA board member Chip Stalter, compensation manager at 414-unit White Castle, based in Columbus, Ohio.

“It’s all about how is the company to work for, do they communicate with me, do they provide benefits, is there some place for me to go in the organization—those factors are ahead of pay,” Stalter said.

The slowing economy may be slowing turnover for some operators, but training, development, benefits and quality of life remain key drivers in retention and employee productivity, operators said.

“Our folks, we feel, are just tucking their heads under the blanket to protect themselves from the economy,” said Mike Conner, vice president of Frisch’s Restaurants Inc., the Cincinnati-based franchisee of 88 Big Boy units and 35 Golden Corral locations.

But while Frisch’s has seen a decline in turnover for managers and hourly workers, the company remains committed to training and retention because fully staffed restaurants with well-trained employees are more profitable, he said.

The CRCA study points out that if employees leave a company, it is often because of their boss, Conner said.

“If you look at the reasons for leaving—scheduling [conflicts], compensation, work-life balance—the manager has control over every one of those items,” he said. “Our managers are our best leaders, and our best managers have the lowest turnover and their restaurants outperform their peer group.”

Morse from the Hay Group encouraged operators to survey their employees to find out what attracted them to the company and what is keeping them.

“The implication for restaurant companies is reconsider what is of value to your people and what will get you the most bang for the buck,” Morse said. “Survey them on their way in, while they are there and when they leave.”