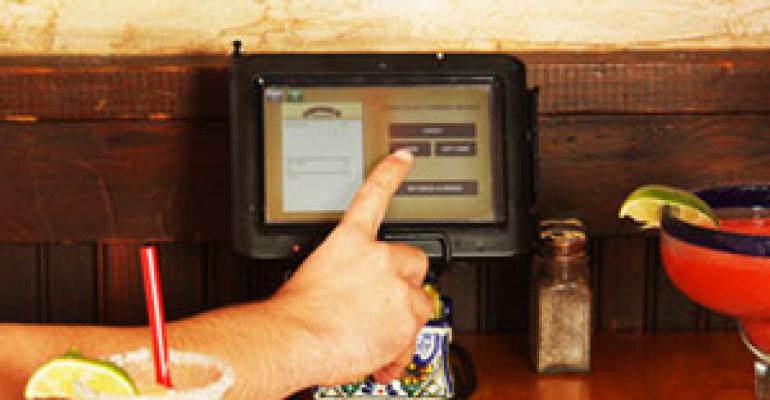 Customers can pay at table, browse menu with new device

California Pizza Kitchen Inc. is testing a touch-screen device in at least three stores that lets guests pay their tabs from their tables, according to an analyst report.

CPK is also using the device to market menu items, conduct surveys and recruit loyalty program members, said Brad Ludington of Keybanc Capital Markets Inc., who follows CPK and is aware of some details of the trial through “channel checks.”

He added that the technology has possible positive ramifications for the struggling casual-dining segment.

“We believe that the potential cost savings, positive impact on
customer satisfaction, improved reads on new menu items and improved market research capabilities could not only help CPKI, but could be a trend seen across multiple casual-dining brands in the coming years,” Ludington said in a report Friday.

CPK is not ready to comment publicly about the technology trial, according to a representative of the Los Angeles-based company, which operates or franchises about 260 restaurants. Most of the company’s locations are casual-dining sites under its California Pizza Kitchen brand.

Word of the tabletop device test by CPK comes just days after the closure of the last of three “interactive restaurants” operated by uWink Inc., a startup by Atari and Chuck E. Cheese’s creator Nolan Bushnell.

The Sept. 12 closure of the uWink casual-dining restaurant at the Hollywood & Highland retail center in Los Angeles was noted at the company’s website. It followed the April 2009 shuttering of a uWink in Mountain View, Calif., and the closure in January of the company’s original three-year-old location in Woodland Hills, Calif.

UWink, which in 2008 began to suffer significant decreases in restaurant sales as the recession kicked in, spun off its technology development and sales arm, Tapcode Inc., last year, before it began closing its restaurant operations. The company’s technology had attracted widespread interest within the industry by permitting guests to order food and drinks, play games, watch movie trailers or other video content, and pay their tabs using a touch-screen terminal at each table.

CPK is testing the wireless Ziosk brand terminal technology of Dallas-based TableTop Media at single restaurants in the California cities of Huntington Beach and Long Beach, as well as in a Dallas location, NRN phone calls to a variety of CPK units determined.

The wireless Ziosk terminals also have been in trial or deployed for nearly three years at selected branches of the Cozymel’s Mexican Grill chain, including locations in Grapevine, Texas, and Manhattan Beach, Calif. TableTop Media and Cozymel’s share some ownership and executive leadership in Dallas entrepreneur Jack Baum.

Multiple franchised Chili’s Grill & Bar restaurants in the Chicago market operated by ERJ Dining of Louisville, Ky., are using the touch-screen devices, which also are under review or being tried by other national foodservice chains that TableTop officials would not identify because of non-disclosure agreements.

Financial analyst Ludington said CPK has been testing the Ziosk technology in selected restaurants since late last month. He said the pay-at-table feature in test “may be the most important function,” as it permits guests to split the check as they see fit and pay by swiping their own credit or debit card.

“We believe that this could increase throughput and significantly boost customer satisfaction scores as the customer gets to finish the experience on his or her own terms,” Ludington wrote.

CPK is not testing all Ziosk features, Ludington noted, but it is testing a “digital table tent” function that lets guests touch their way through multiple screens of images and information about drinks, appetizers, desserts and coffees.

“We believe that the interactive nature provided here will likely increase trail, which has always been an issue for CPK, as many customers just order their favorite item rather than look through the menu for new options,” the analyst said. “This will also help cut costs in the long term as the company could just send new promotions out digitally to the entire restaurant system rather than having to print out individual table tents each time.”

“We believe that this will not only significantly increase the survey response rate and improve the quality of CPKI's market research,” he said, “but will also allow for real-time resolution of problems, as it has the capability to send out a manager alert if negative responses.”

If initial test results are positive, Ludington said he believes CPK will expand the test to other restaurants and possibly test additional features of the device.

Though CPK is unlikely to use such terminals to replace servers, Ludington said CPK may test letting guests order additional drinks and desserts using the devices and that the technology could help bolster loyalty and gift card programs and help meet pending government mandates to display menu item nutrition information.