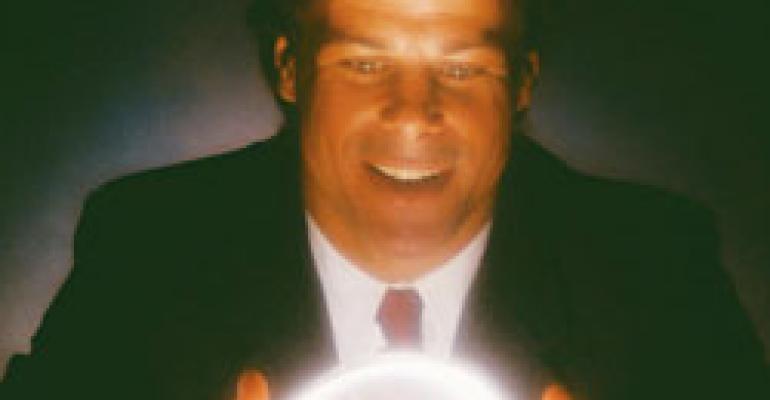 Back to the Future

The best way to predict the future, someone once observed, is to invent it.

Put another way, if you’re a restaurateur looking to design the next hot concept, all you really need to know is what consumers will want before they know it themselves and then find the best way to give it to them.

Nothing to it, right?

Unfortunately, when it comes to predicting the future, people have an annoying habit of not behaving the way they’re expected to. On the other hand, experts would argue that certain things are more likely to occur than others, particularly when they’re already supported by existing behavior. For that reason, fast-casual concepts in particular remain well positioned to capture consumers’ attention.

Given the ailing economy, comparatively lower fast-casual check averages for higher-quality menu offerings should appeal to cash-strapped diners looking both for sustenance and a treat for themselves. Recent history supports that. Even as the economy began to stall in 2007, the fast-casual segment’s sales grew 13.3 percent overall for the year, compared with 5.3 percent for the quick-service sector, according to foodservice consulting firm Technomic Inc. in Chicago.

Yet while many restaurant operators are wringing their hands over the current economic climate, Hudson Riehle, senior vice president of research for the National Restaurant Association, predicts it’s only a matter of time before the industry rebounds.

“History is quite clear,” Riehle says. “Once consumers’ cash-on-hand position improves, they’ll be back. Americans love to patronize restaurants. They’d rather go to restaurants than put gas in their tanks.”

So accepting the fact that consumers will indeed be back, exactly what kinds of things will they be looking for in fast-casual and other restaurant segments over the next five to 10 years? Technology, great service, and quick, economical and convenient meals are just some of the areas operators should focus on, a number of industry insiders say.

For instance, Nolan Bushnell, the chief executive of uWink Inc., the two-unit high-tech dining concept, says restaurants will be much more technology-oriented than in the past.

“Technology will help restaurateurs create a fun environment that engages people on many levels,” says the founder of Atari and the Chuck E. Cheese’s chain. “Visiting a restaurant is about more than just feeding the stomach.”

In particular, Bushnell predicts the evolution of “another class of restaurants, which people will come to primarily for the fun and secondarily for the food.”

“It will incorporate a series of highly evolved entertainment facilities that will have the draw of a movie theater along with a food component,” Bushnell says.

Even for those restaurateurs not necessarily focused on integrating an entertainment component into their operations, technology will play an increasingly important part in customer service, he says. “Automatic ordering from touch screens [at the table] will give operators the ability to be very granular when it comes to serving food,” he says. “You will see a lot of restaurants giving people the option of, say, putting 240 condiments on their burgers. There’s no way a waiter or waitress can do that, but technology could deliver that order to the kitchen.”

For those operators who want to develop a nutrition-centric concept, touch screens could easily provide all of the food information consumers could require, he says.

Dan Burrus, chief executive of Burrus Research, a leading technology forecaster in Milwaukee, maintains that restaurateurs looking toward the future should concentrate on technology that changes the way the consumer behaves.

For example, he predicts that automobile-based global-positioning systems will play a larger role in the consumer’s dining decision.

“In addition to suggesting a route to the airport, a GPS will be able tell you if there has been an accident along the way, whether your flight is late and how long it will be delayed,” he says. “In that case, it might suggest that you have time to get something to eat, and not only tell you what restaurants are along the way, but provide menus and pictures too. And you’ll be able to order ahead from your car.”

“The systems are becoming more intelligent, and customers want information right away,” he says.

He also forecasts an upsurge in mobile commerce. Cell phones with advanced biometrics—security controls like fingerprint scanners—and credit card chips will allow consumers to transfer secure data when booking a meal, he says.

Burrus points out that iPhones also are changing how consumers behave.

“Touch screens haven’t been particularly popular in restaurants because people are unfamiliar with them,” he says. “But the iPhone is changing that.”

Riehle points out that advances in technology and packaging are opening up new opportunities in the delivery field for restaurateurs looking to maximize their points of access. Citing the importance of curbside service and takeout in the recent industry growth and the critical importance of convenience in the dining-out equation, he predicts that not only will there be a continued interest in nontraditional points of access, but also a heightened focus on the delivery component for some farsighted operators.

“When you look at what is going on with packaging materials and the sophisticated ways of transporting products, it points to a more vibrant off-premise arena,” he says.

Given how lifestyles are busier than ever, convenience continues to be king, says Blaine Sweatt, the former president of new business development for Orlando, Fla.-based Darden Restaurants Inc., the developer of such innovative concepts as Seasons 52, Smokey Bones BBQ and Bahama Breeze.

“Going out to eat in a Red Lobster or Chili’s will continue to be great,” Sweatt says. “But for many people, especially young families with kids or older diners who no longer enjoy the casual-dining experience as much as they once did, simply getting the food quickly, economically and extremely conveniently will be very appealing.”

In fact, profound demographic shifts will drive new concept development in the near future, he says. “There is a huge baby boom going on right now,” Sweatt says. “There are more kids being born in the U.S. now than at any other time in history, even during the Baby Boom. Those kids will be accompanying their parents to restaurants, so maybe we should be revisiting the concepts that appealed to families in the ‘60s and ‘70s to look for clues.”

But while demographic changes and the march of technology clearly will help define the next generation of fast-casual concepts, what kind of menus will these concepts be brandishing? Nancy Kruse, president of Kruse Co., a menu trends analyst based in Atlanta, says we are entering the age of “specialization.”

“More and more menu specialists are appearing in the marketplace,” Kruse says. “They’re offering things like cupcakes, Italian yogurt, macaroni and cheese, and hot dogs. And the burger thing has taken on a life of its own. Look at companies like Five Guys and chefs like Bobby Flay,” who debuted the fast-casual Bobby’s Burger Palace earlier this year.

Consumers, she continues, may be suggesting that they are fed up with generalists and lack of differentiation, “which is obvious in terms of its impact on casual dining.”

“The generalists are in decline,” she says, “but we’ve seen more success with specialists like Buffalo Wild Wings and Olive Garden.”

Kruse also predicts there will be a pronounced emphasis on the use of premium products. “‘Premiumization’ is huge,” she says. “We’re seeing burger chains use Angus beef, grain-fed beef and Niman Ranch beef. Basically, it says we know our business and are committed to doing it right.”

Kruse notes that freshness “and all it suggests to the consumer” is an overarching trend driving menus now and in the future.

“There are myriad opportunities to exploit the fresh phenomenon,” she says.

More specifically, Sweatt sees individual opportunities that might be ripe for development. For instance, he observes that seafood is a major growth opportunity.

“It’s healthy, and with the U.S. possessing more coastline than virtually any other country except Australia, it seems like a natural,” he says.

As for the service component, Jim Sullivan, founder and chief executive of Sullivision, maintains future customers will want what they want now: “An absence of complaints. I don’t think they want service ‘done’ to them. They want an experience devoid of dissatisfaction.”