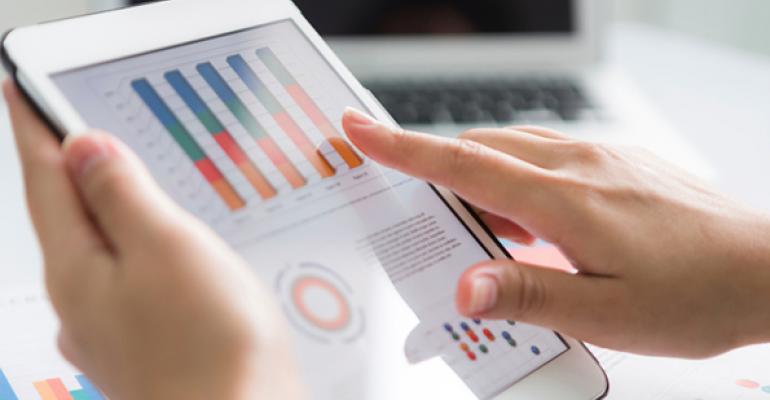 Thirty-eight percent of the 6,106 consumers surveyed in April were “very favorable” toward the technology, 35 percent were not and 26 percent had no opinion, Market Force chief strategy officer Cheryl Flink told Nation’s Restaurant News.

“You can see that the younger population is much more comfortable and used to the technology,” Flink said. “As time goes by, this may become something that is much more looked for and anticipated, and maybe even becomes ‘the thing.’”

For those ages 18 to 24, “What we see is that they think it will help them with convenience, in terms of streamlining the ordering process and getting faster service. It appears to be related to quickness and speed,” Flink said.

Older diners “would rather talk to a person. They would rather interact live with a service person. And they are concerned service would actually decline if they used technology. It’s almost opposite extremes,” Flink said.

“Cheesecake Factory did extremely well — best in class — at providing high-quality food,” Flink said. “They were also rated as best in class of being more of an experience than just a meal. That was related to two other things: They were rated second on having an inviting atmosphere and second on the operational excellence piece of a clean interior and exterior. They also get high ratings on variety for their menu.”

“What keeps coming up in the differentiation of who is winning in each of the classes, there are three or four things that really stand out. One is the high food quality. The second is being more than just a meal,” Flink said.

Friendly service and an “inviting” atmosphere were also important.

Market Force asked participants to rate their satisfaction with their most recent casual-dining experience and their likelihood to refer that restaurant to others.

The Cheesecake Factory led the food quality category, trailed by Cracker Barrel and Red Robin. It also tied with Applebee’s for healthful food, and with Cracker Barrel for atmosphere. Value was a tight category, with TGI Fridays first, Cracker Barrel second and Chili’s third.

The Capital Grille was a clear winner, scoring 77 percent. Second-place Texas Roadhouse scored 61 percent, and third-place The Keg scored 57 percent. The Capital Grille ranked highest for food quality, atmosphere and cleanliness, and The Keg was second in all three categories. Texas Roadhouse prevailed as the No. 1 brand for fast service and friendly service, and stood out for accommodating children 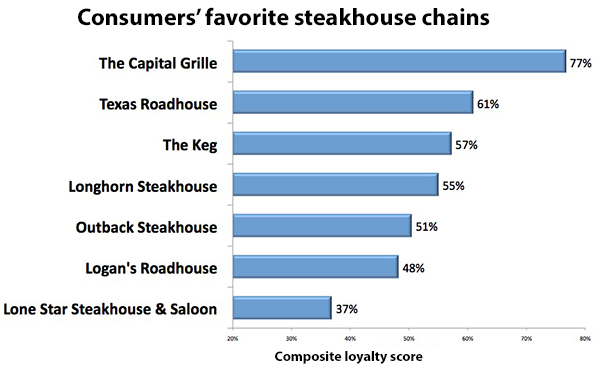 In the casual-dining seafood category, the top-five favorites were Pappadeaux, Bonefish Grill, Bahama Breeze, Joe’s Crab Shack and Red Lobster. Pappadeaux and Bonefish Grill rated No. 1 for food quality. They also both ranked in the top three for atmosphere. Joe’s Crab Shack ranked high in fast service, accommodating children and delivering an experience. Bahama Breeze scored well across the board, particularly in the value category.

While not all the Market Force breakfast category restaurants fell into the traditional definition of casual dining, with table service and adult beverages, the rankings placed French-themed Mimi’s Café as the favorite, followed by Waffle House and Bob Evans in a tie for second.

Market Force found that 46 percent of those surveyed visited casual-dining restaurants at least five times per month. When asked about their dining habits this year compared to 2013, 12 percent said they have dined out more, 28 percent less and 60 percent about the same.

The survey was conducted in April across the United States and Canada. Among the 6,106 respondents, nearly 62 percent reported household incomes of more than $50,000 a year. Respondents’ ages ranged from 18 to over 65. About 75 percent were women and 25 percent were men. About 70 percent are married, and 40 percent had children at home.