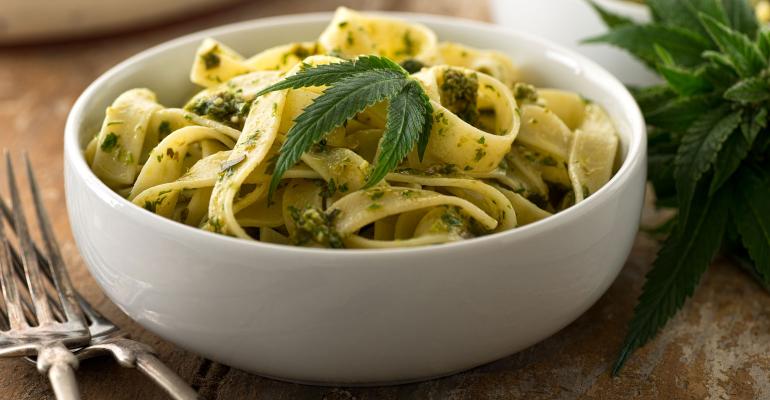 Hi Nancy, or maybe instead I should write, “High, Nancy?”

Related: What to expect in 2019: More AI technology, marijuana and 'motherless meat'

With the volume of buzz about marijuana in foodservice, it seems like everyone’s ready to jump on the cannabis bandwagon. Or maybe, you know, to climb onto it slowly because, whoa, look at that tree!

My hands are funny looking.

What was I saying?

Oh yeah: Marijuana Business Daily put domestic legal marijuana revenue for 2017 between $5.8 billion and $6.6 billion — more than organic produce and Oreo cookies combined, it said. It estimated demand — presumably provided by the illegal pot trade — at about 10 times that.

The domestic beer market, by comparison, is around $111 billion, according to the Brewers Association.

Market research firm Grand View Research put the current value of the global legal marijuana trade at $9.3 billion and projects that it will grow past $146 billion by 2025. And that was before recreational marijuana was legalized in Canada in October.

Nearly every day I get a new email about someone going into the marijuana business or introducing some new product with cannabidiol, or CBD, a non-psychoactive component of cannabis that is touted for its calming effects and for curative properties for ailments ranging from Alzheimer’s disease to epilepsy. It’s a different compound from the more fun tetrahydrocannabinol, or THC, which gets you high.

The interest in marijuana as it pertains to food is so pervasive that there was even a presentation about it at the annual conference of the relatively stodgy American Culinary Federation.

There, chefs at country clubs and hotels, as well as culinary educators, listened to “Herbal Chef” Chris Sayegh plot out the course of his cannabis-laced dinners, in which he added both THC oil and CBD oil to dishes, in carefully measured doses, to create physiological peaks and valleys over the course of the meal, front-loading with THC so that guests were pretty euphoric by the fourth course, and then adding CBD to soothe them as they had dessert and went home to bed.

From an entertainment perspective, this is a brave new world: Despite anecdotal evidence to the contrary, science tells us that all alcohol gets us drunk in the same way. It’s all ethanol, and if you think whiskey, tequila, wine and beer have different effects on you, you’re imagining it. It’s less likely that beer makes you want to party and whiskey makes you belligerent than that you drink beer when you want to party and whiskey when you want to be a jerk.

But there really are different psychoactive compounds in marijuana. Quite apart from THC and CBD, there are many terpenes in cannabis which have different aromas and possibly different effects.

Imagine if you will, Nancy, restaurants serving canapés at the beginning of a meal with just the right amount of THC butter so that by the time the entrées arrive you’ll think the food is delicious no matter how it tastes. Especially if it’s crunchy.

A few chefs in the 10 states, and the District of Columbia, where marijuana is now legal for recreational consumption — as opposed to being legal for medical use only, which it is in an additional 22 states — have thrown pot-laced dinners. Those meals are generally held offsite, and the edible marijuana products are provided by staff from licensed dispensaries, and guests have to add it themselves.

A couple of years ago I went to a meeting in Denver of local restaurateurs where such a dinner was described. Two lawyers were also at the meeting, and they basically said, “Yeah, that’s illegal.”

It seems that cannabis dispensaries can only dispense cannabis at their own facilities, and others can no more hand it out than unlicensed restaurants can sell booze.

Cocktails containing CBD oil are now a full-fledged trend, but the legality of CBD in most states is iffy at best, dependent on where and how it’s produced and other factors that mean you really should talk to your lawyer before putting such drinks on your cocktail list.

As for Coke, the soft-drink giant, in a boilerplate statement, indicates that rumors of its interest in the potentially booming pot business are overblown.

“We have no interest in marijuana or cannabis,” it said. “Along with many others in the beverage industry, we are closely watching the growth of non-psychoactive CBD as an ingredient in functional wellness beverages around the world. The space is evolving quickly. No decisions have been made at this time.”

The company later said it would wait until further research was done into the effects of CBD before joining the fray.

Local authorities seem disinclined to crack down on this grey-market marijuana activity, at least for now, and although marijuana remains a Schedule I drug at the federal level — in the same category as heroin and peyote — Washington seems to be leaving well-enough alone, too.

So, Nancy, I’d like to ask you what you make of this Wild West of weed? Are we going full-smoke ahead with cannabis products or is something going to come along and kill the buzz?

Holy smoke, Dude, er, Bret, and I do mean holy smoke. You had me at the THC butter. Reading your piece made me want to dig out some bellbottoms and put a little vinyl on the turntable. Unfortunately, I don’t actually possess any of these artifacts from the ’60s, but I understand that they are undergoing a revival just like the marijuana that informed and inspired their popularity back in the day.

As you point out, CBD, along with marijuana in general and THC and hemp in particular, has been generating all kinds of overheated rhetoric, and we are going to see much more unrestrained hyperbole from all sides in what you correctly and alliteratively term the Wild West of weed. While the smoke from your office is rendering my crystal ball a little murky at the moment, I do think it’s possible to make some predictions about the impact on the restaurant industry.

First, we can expect the increasing use of CBD and related compounds in food products to generate seriously overinflated claims, most of which will just skirt to boundaries of legality. A recent, in-depth article in Vox, the online news aggregator and “explainer,” helpfully explained that there are neither FDA oversight nor USDA standards of identity for CBD products. By default, some fall into the herbal supplement category, a Bermuda triangle of flim-flam awash in snake oil and unregulated claims. Because marijuana has been illegal and off limits to researchers for so long, there is no reliable data on usage, dosage, risks and so on. So buyers will need to beware of chefs, herbalists, coffee roasters or marketers of any stripe who claim they can control physiological peaks and valleys with microdoses of these compounds.

A good buyer-beware example is the CBD latte that the Vox writer purchased at his neighborhood coffee shop in Brooklyn. Despite its hint of “marijuana herbiness,” he notes rather grumpily that it did not deliver the expected calming effects or lessen his anxieties. This begs the question of why anyone would want to kill a caffeine buzz with a soporific that carries a $9 price tag.

Anyway, the story also describes a dizzying range of CBD-enhanced products, like the doggie treats available at Chicago’s Happy Dog Barkery — no, I’m not making this up — which soothes the savage beast of condo-bound canines undone by loud noises like thunder and fireworks. The shop’s owner testifies to the product’s efficacy, which she has used on her own nervous pup, Kale Chips — nope, I’m not making this up either. But honestly, if my name were Kale Chips, I’d probably want to get high, too.

We will also see early-adopter chefs and restaurateurs dance around their promotion of CBD. There will be winking, nodding and stoner double-entendres all over the place. Exhibit A is the fast casual, vegan chain By Chloe, which recently introduced a line of CBD-infused baked goods — or perhaps I should say “baked” goods?

Sorry. Anyway, the line of snacks, sweets and treats is infused with all-natural, full spectrum hemp extract and eschews pesticides, herbicides, solvents and chemical fertilizers. These last are decried on the menu by parenthetical expressions like “ew,” “WTF,” and “gross.” None of which are scientific terms, of course, but all of which are shorthand readily understood by the chain’s targeted plant-loving diners. And you can insert your own plant pun here, Bret. By the way, the name of the line is Feelz, a moniker perhaps better suited to a VW bus circa 1968 or a rapper circa 2010.

The market will evolve at breakneck speed as legal prohibitions fall, with specialists like The Mint Dispensary in Tempe, Ariz., scrambling to secure strategic advantage. That shop, which touts its “High Standards,” is a self-described “state of the art medical cannabis facility, featuring a Multi-Point-of-Sale system designed to optimize patient services. Whether you are a well-Meducated regular who knows exactly what strain they need or a newbie.”

While I like to think I’m as “well-Meducated” as the next person, newbies do get some attractive incentives like free pipes or dab rigs. What’s more, there are BOGOs, secret menus, discounts for seniors and veterans, and traffic drivers like Morning High, which is a 20 percent discount before 10 a.m., Munchie Monday Bake Sale and Toasted Tuesday. I could go on, but I’ve rolled my eyes so much that I’m getting a headache. According to a local TV report, the corporate chef tests recipes on employees, which seems like a hell of a perk.

But let’s consider the corporate chef for a moment. Reportedly she’s a cancer survivor whose suffering was alleviated by her use of marijuana. Further, she designs her menu with the specific nutritional needs of the chronically ill in mind. The potential for marijuana and related compounds to palliate suffering is a universal good, and its universal availability is long overdue in my estimation. So I’d hate to think that all this hoopla will lead to a backlash and retightened regulations. Vox points out that the 2018 farm bill, which remains stalled in the morass of congressional inertia, “would make CBD and industrial hemp legal nationwide if passed as it stands.”

But no one is holding his breath — and no, that’s actually not a marijuana joke but more a sad reflection on legislative inaction.

Which leads to my closing thought. With a few understandable slips, I’ve been pretty much a model of decorum throughout this exchange. So, Bret, in return and as a reward, could you let me know how the heck to get hired (higher-ed) at Marijuana Business Daily?