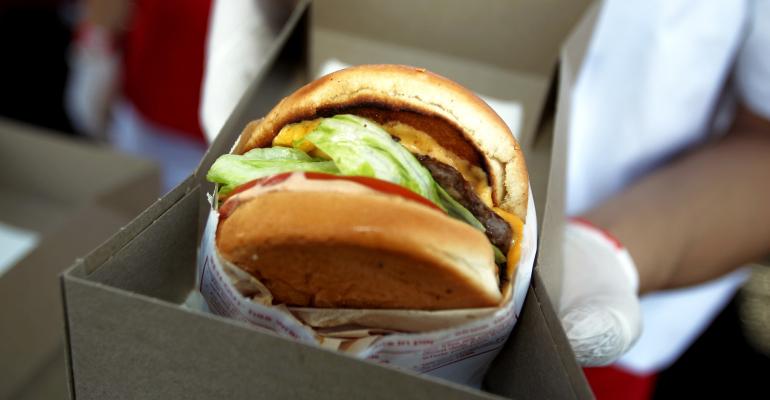 In-N-Out: The making of a cult restaurant

How the chain built its iconic brand

Some brands have it, some brands don’t. But what if you could conjure up that lightning in a bottle? Here’s a reverse-engineered recipe for the cult status of iconic burger brand In-N-Out with input from experts on food, brands, restaurants, commerce, pop culture, and the myths and legends of California. With its cult-like status, it’s not surprising that In-N-Out Burger topped the Consumer Picks True Loyalty list, and tied for first in the service category, according to Datassential research.

What exactly is it that compels us to worship at the order counter of certain brands of fast-food chains and not others? To make a cheeseburger pilgrimage that involves air travel? To post an instantly recognizable Instagram of that perfect burger swaddled in a white and red wrapper to herald our arrival on the West Coast? To commit to memory a secret menu that sounds like gibberish to the uninitiated?

Here are a few of the fascinating reasons that make up the ingredients that have turned In-N-Out from a clean place to eat in the late 1940s, established by Harry and Esther Snyder, to a worldwide cult favorite and every bit a symbol of mythical California as palm trees, Hollywood’s red carpet or Marilyn Monroe’s ghost.

First, a little history: the Snyders’ vision was a fresh, immaculately clean burger place that pioneered the drive-thru as we know it, hooking up two-way radios in addition to employing traditional-at-the-time car hops for customers who wanted to park. They also introduced the catchy term “double double.” When Harry died in 1976, In-N-Out had only 18 outlets, but over the next 20 years, 90 more opened.

There are now 319 units. (In-N-Out representatives said they were flattered by the premise of this article, but citing modesty, declined to comment.)

Here are the ingredients to the special something that elevated the brand to cult status. The demeanor of counter workers can make or break a customer’s experience. In-N-Out employees are known for their friendly attitudes, and the chain invests in its staff, paying a starting hourly wage of $11.

Sure, In-N-Out is famous now, but anyone can grasp that feeling of “I knew them when.” In short, it’s not pretentious, and it never has been.

Nostalgia is a powerful ingredient in creating In-N-Out’s special sauce, according to Arlene Spiegel, founder and president of Arlene Spiegel & Associates, a restaurant, retail and foodservice consulting firm in New York City.

“They are not just selling a burger, but a nostalgic, comforting experience that adds that special ‘emotional sauce,’” Spiegel said.

“In-N-Out in particular is very democratic, non-elitist in its accessibility and price point.”

“It wasn’t a surfer brand. It was more of an inland brand,” said Noveshen, who is also founder and president of The Culinary Edge food and restaurant agency.

He compared the wholesome, nostalgic aura of In-N-Out to that of the 1973 movie “American Graffiti.”

“Simple…Americana…California,” Noveshen said. “There was always a lack of pretentiousness.”

Allow customers to be in the know

The secret menu is another key factor to cult status. It may have come about as a direct result of the simplicity of the menu; with this brand, what may be considered a drawback (lack of variety on the menu) has only served to build an insider status.

The Animal Style secret menu item, for instance, is a burger patty cooked in mustard, with extra spread and grilled onions on top of lettuce and tomato.

“That part of it was what I think shifted in the last 15 years; that first hipster emergence was knowing the secret menu. It was all through word of mouth, and that was part of the coolness,” Noveshen said.

Being in the know carries with it a powerful emotional element, one reason that leads people to follow certain brands, according to Doug Austin, founder and president of marketing consulting firm Austin Amplifies, based in Springfield, Mo. He has worked for several ad agencies over the years and was part of California clothing brand Von Dutch’s rise to cult status.

“The power of discovery is one of the most influential emotional connections we have to a brand, an experience or a place,” Austin said. “It’s something that is, by definition, a surprise, and thus a delight if it was a good experience.”

When people discover something they like, they become ambassadors for the brand, bringing others along as they go, “which I’m pretty sure is what a cult following is.”

The food at In-N-Out isn’t just Instagram-ready, it’s paparazzi-ready. After every major Hollywood awards show, watch social media to see which brand of burger your favorite celebrities are wolfing down.

It’s a fact: Americans like to look at gorgeous celebrities decked out in black-tie attire stuffing their faces with burgers after an awards show, specifically In-N-Out burgers. (Stars…they’re just like us!)

California chef Thomas Keller’s Instagram account even showed us a grainy nighttime shot of the living culinary icon ordering In-N-Out. “Top Chef” host Padma Lakshmi posted a shot of herself posing in a shiny chartreuse gown while cradling a greasy bundle of goodness at her chest.

“Celebrities who want to appear like real, everyday people can’t find a better place to be associated with,” Spiegel said.

SFGate writer Katie Dowd called “the chain’s obsession with looks” one of its greatest strengths. After all, what’s a Hollywood glam burger that’s not ready for the red carpet?

Redditors recently posed questions to an In-N-Out employee with the username booshley 101 questions on Reddit’s Ask Me Anything forum (AMA). The conversation touched on the topic of relentless attention to detail on the tray.

Tray real estate, not an entirely uncommon fast-food practice, translates to In-N-Out’s rule of only placing two burgers and two fries on one tray, the maximum capacity “without ruining the presentation,” booshley explained on the AMA.

She also explained that nothing larger than a 4x4 is allowed anymore. “4x4s are already ridiculously hard to wrap and anything larger would just look like a total mess,” booshley wrote.

“Again, it’s about presentation. If you want a larger burger, we can give you cheese patties on the side but we’re not allowed to actually assemble it for you.”

Many experts point to the fact that In-N-Out grew so slowly and that it’s never been franchised as major reasons for its ascension to cult status.

“I think that one of In-N-Out’s real advantages is its regionality, its resistance to becoming a national brand,” said Nancy Kruse, menu trend tracker, NRN contributor and president of The Kruse Company.

“The broader the distribution of a chain’s units, the less likely it is to maintain the cool factor. The relatively small number of units and the fact that they are strongly California-oriented adds to the brand cachet.”

In-N-Out also has the respect of its peers for its long-term approach to growth.

“They’re certainly iconic, and when people talk about California, they may be one of the top 10 things you think about,” said Russ Bendel, CEO of The Habit Restaurants Inc., a California burger brand that has been around for 48 years.

In a sense, Habit “grew up across the street” from In-N-Out, Bendel said. From a business standpoint, he attributed In-N-Out’s cult status to “very disciplined, controlled growth and a maniacal focus…They’ve always taken a very long-term approach to their business.” You can’t stand for everything

There’s an old saying, that you can tell when food has been made with love. However, it’s easy to tell the difference between a surly employee at the counter and one with a friendly smile, something that changes the face of the whole brand.

In-N-Out employees are known for being friendly. This reputation helped the brand tie for first for service in the Consumer Picks report. The chain also invests in its workers, paying a starting hourly wage of $11.

“There’s a certain purity and a purpose to it. As an employer, they’re saying, ‘We stand for hard work, and we want to take care of people, and we’re going to show it by paying people more money,’” Noveshen said.

Having a good reputation seems to be easier when a brand has a history and a story to tell.

“It’s really all about the perception one has of the brand, regardless of the reality of the brand,” Austin said.

“This is where the power of discovery comes in. To create a cult brand, you must know who you are, what you stand for and be resolute in that stance. Be for something.

“And not for everything. Have a niche or purpose, even if others do too. You can own your depth of the position.”