KFC — also known as Kentucky Fried Chicken — is a Louisville, Ky.-based quick-service fried chicken chain and subsidiary of Yum Brands, which also owns Taco Bell, Pizza Hut and The Habit Burger Grill. Kentucky Fried Chicken was founded by Colonel Harland Sanders, who opened the first franchise in Utah in 1952, diversifying the then dominance of burger restaurants in the quick-service market.

Since then, Colonel Sanders has become an iconic mascot for the largest fried chicken chain in the United States, popular for its secret recipe of 11 herbs and spices coating the red and white buckets of “finger lickin’ good” chicken and side recipes like coleslaw.

In 1982, KFC was sold to PepsiCo, which introduced the company to China, where it remains one of the most popular restaurant chains in the market. In 1997, PepsiCo spun off its restaurants division, forming Tricon Global Restaurants, which was renamed to Yum Brands in 2002.

Over the years, KFC has made waves with viral menu innovations like the Double Down sandwich with two pieces of fried chicken as bread.

More recently, KFC introduced a new fried chicken sandwich to compete in the “fried chicken wars” of 2019 and 2020, and in November unveiled new prototype stores that emphasize convenience and technology. 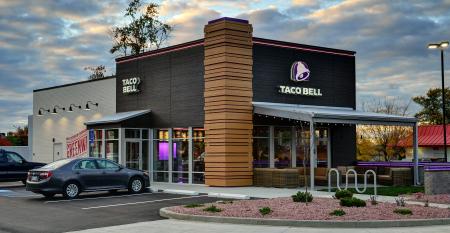 KFC launches chicken nuggets for the first time
Jul 18, 2022
Previously, the Yum brand has only had popcorn chicken bites, 'original recipe bites' and Beyond Meat nuggets

How KFC used eye-catching real estate design to make a statement
Jun 15, 2022
KFC unveiled the ‘Crystal Bucket’ store design in Painted Post, N.Y.: while the design is a one-off, it makes an impact

NRN editors discuss restaurants closing Russian units, RRF’s future and Biden’s regulation of cryptocurrency
Mar 11, 2022
Plus, hear from Whataburger’s group director for brand communications and culture Donna Tuttle about how the brand has fared during the labor crisis

KFC is expanding its Next Generation store concept
Feb 16, 2022
KFC is net new unit positive for the first time in 17 years, with 55 new store openings in 2022
Load More