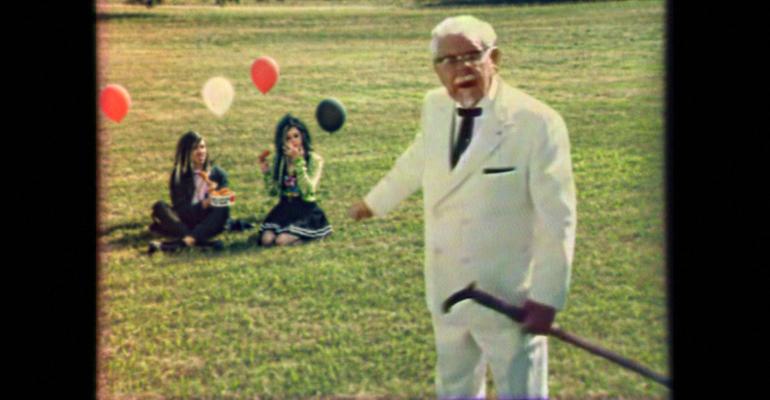 KFC brings back the Colonel — the real one

KFC has a new Colonel Sanders.

The Louisville-based chicken chain has spent the past couple of years parading a series of actors and comedians to play its iconic founder. Now the company is featuring old video of the original Sanders in modern-day ads.

The company is using video from KFC ads from the 1960s and 70s interspersed with contemporary footage.

“Unfortunately, our original Colonel stopped making ads in the 1970s, so we utilized technology to bring him into the 21th century.”

The company is not ditching its celebrity-fueled ads, which have featured people such as Jim Gaffigan, Darrell Hammond, Norm MacDonald, George Hamilton and Rob Lowe, among others.

Yet the company felt that Sanders would be the best spokesman for its Original Recipe ads. “The original Colonel Sanders is the most qualified person to sell his Original Recipe fried chicken,” a company spokeswoman said. “This is our homage to him.”

KFC’s same-store sales in the U.S. has picked up in the past two years after several years of weakness — in part because of those ads featuring Sanders. The company has put its founder at the center of its comeback effort, including features in the chain’s redesign, and a website highlighting his interesting life. Original Recipe is the flavor of chicken around which Sanders founded KFC.

The new Sanders ads use Sanders to sell offers such as the $5 Fill Up and $10 Chicken Share.