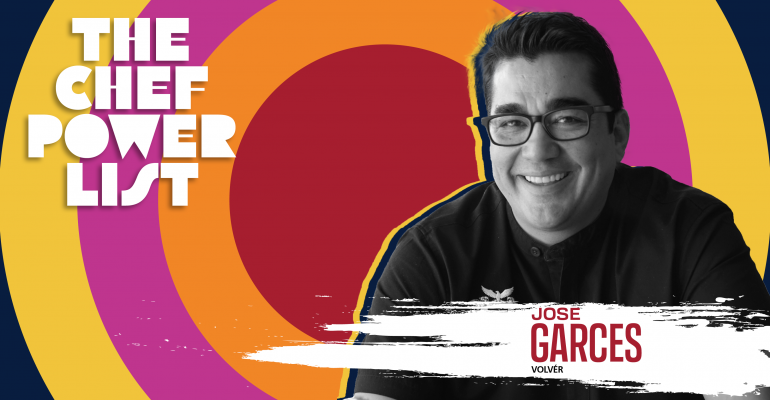 After closing his fine-dining concept Volvér for more than a year as a result of the pandemic, Philadelphia restaurateur Jose Garces decided to do something a little different with the restaurant, which the chef considered his “creative hub.”

Since it opened in 2014, Volvér had offered a tasting menu, and then later went a la carte, with an innovative French-inspired menu prepared in a performance kitchen that became a key part of the Kimmel Cultural Campus performing arts center where it is located. “It’s a spotlight restaurant,” he said.

But, coming back from the pandemic shutdown, the multi-concept operator was troubled by the landscape of emerging chefs who were struggling to keep businesses open or even to get them off the ground.

He reopened Volvér with a chef-in-residency program that invited in a diverse pool of culinary talent to serve their dishes for six- to eight-week stints. Dishes from Volvér’s menu are also available, but the goal is to give guests exposure to a rich panoply of flavors and recipes from around the world, from Kalua Pig Tacos with Shiso and Chili Peppah Water Pineapple Salsa from Hawaiian chef Kiki Aranita (co-owner of Poi Dog), to Locro, an Andean pork stew with winter squash, chorizo, hominy and Peruvian lima beans from Argentinian chef Jezabel Careaga (Jezabel’s), who is the chef in resident through March 13.

In addition to giving their food exposure and getting mentorship support, the chefs in residence also benefit financially. Guests are encouraged to tip the chef and the Garces Foundation matches tips up to $5,000. Phila Lorn, who was Volvér’s chef in residence in December and early January, said he earned close to $10,000, which has been a big help as he prepares to open his first restaurant, Puck & See (which he said loosely translates to “drink and eat” in Khmer).

After 16 years of cooking in restaurants across the city (Zama, Stock and Terrain), Lorn is preparing to sign a lease for a Cambodian noodle bar and grill and bottle shop he hopes to open in South Philly this year. The menu will include dishes like banh zeo, a Cambodian crepe dish that was a particular hit at Volvér.

“It was amazing for me to look around the room and see Cambodian food — stuff I grew up with — on the tables at Volvér in Center City Philadelphia,” he said.

For Garces, whose restaurant group includes Amada, Distrito, The Olde Bar, Village Whiskey, the soon-to-grow chain Buena Onda and several virtual restaurant brands, the chef-in-residency program has proven a hit with guests, and he plans to keep it going.

“I’m a collaborator at heart,” he said, saying he loves seeking out the emerging talent sometimes hidden in the “underbelly” of the industry. “It inspires me to match up and change the menu; to evolve. … I just think it’s the perfect stage for everyone.”