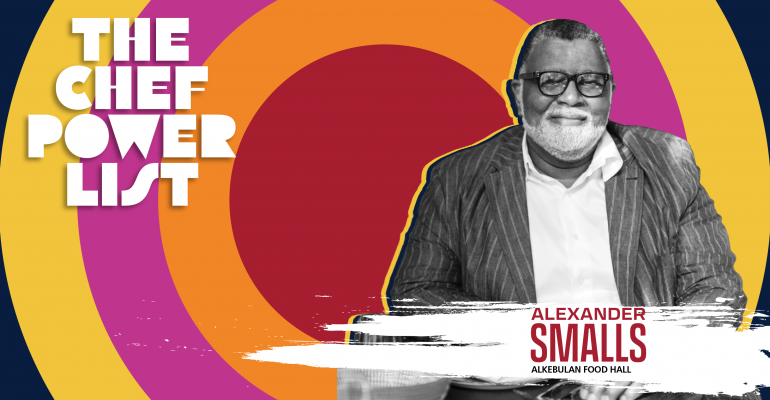 Alexander Smalls raises awareness of the diversity of African cuisines

Alexander Smalls has long been a proponent of elevating Black people’s voices. At first he did that literally, as an opera singer. He was a pretty successful one, having won a Grammy and a Tony for his performance in Porgy and Bess by George Gershwin, but he said he still hit a glass ceiling beyond which a Black opera singer wasn’t going to progress.

To really be successful, he said, “I had to not only own a seat at the table; I had to own the table.”

He couldn’t own an opera house, but he could own a restaurant. And he did just that with the opening in the early 1990s of Café Beulah in what was then the up-and-coming area of Park Avenue South in New York City, just north of Union Square, which was in the process of being revitalized by restaurateur Danny Meyer, chef Douglas Rodriguez and others.

Café Beulah was something the city had not likely seen before, which was a fine-ding African-American kitchen.

As an opera singer, Smalls had traveled the world. “I recognized that the African-American culinary conversation was not part of the [broader culinary] conversation,” he said. “People didn’t think of our food as a cuisine. It was ‘soul food.’ It was ‘heart attack food.’ It was castaway food. It was sneaky indulgent food, but it wasn’t respected.”

So he took the traditional recipes of his mother and grandmothers, added his own flair, and, as he had seen chefs of other cuisines do, “re-dressed, re-plated, put into a classical landscape with lots of beautiful china and flowers and things like that, that essentially carried more of a curated museum kind of feeling,” he said.

He ended up opening three restaurants like that before taking a break from foodservice. He traveled the world and learned that African slaves in South America and Asia also had profound influences on the cuisines there, which led to the opening in Harlem of The Cecil, an Afro-Asian concept that he left in 2017.

His latest project carries that culinary conversation further. Alkebulan is an ancient name for Africa, and also the name of a food hall in Dubai that Smalls curated, with 11 restaurants that opened in October 2021, originally as a temporary project that was part of Expo 2020 Dubai. But now it’s there permanently, and planning for new versions of it are underway for London and New York City.

The Alkebulan in London will focus on the countries colonized by the British empire. The one in New York will highlight the influence of the slave trade on American cuisine, from Gullah Geechee and Low Country cuisines to the culinary heritage of Louisiana to the many iterations of barbecue. Of course the continent of Africa will be on display, too, with foods ranging from South African Braai — that country’s approach to outdoor grilling — to East African seafood and goat, to the rich stews and jollof rice of West Africa.

The sites for those food halls haven’t been located yet, but Smalls expects the New York one to be in Harlem, where he has lived since 1998.

“Harlem is the Mecca city for me when it comes to the African diaspora,” Smalls said. “It’s the community that feeds me and inspires me. Being able to bring something like Alkebulan to this community — nothing excites me more than that.”