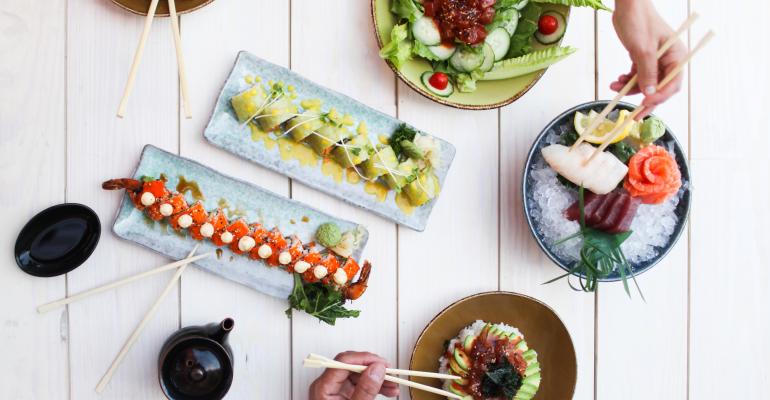 Sushi Maki is in every kind of food space you can imagine — Whole Foods, consumer-packaged goods, casual dining, fast casual, universities, airports — and now a “polished fast-casual” location in Fort Lauderdale that opened last month. Safe to say that 24-unit Sushi Maki is the sushi chain of Southern Florida.

“Chances are, if you host events in South Florida at hotels and country clubs and sushi is on the menu, it's ours,” said Sushi Maki CEO and founder Abe Ng.

It’s the new fast-casual restaurant format that the chain is really capitalizing on – and it was inspired by consumers’ changing habits.

“We actually started with our movement to fast casual because we saw that was the way people were eating, and they wanted to get in and out faster,” said Ng. “They wanted to control their time.”

The new space occupies a 2,500-square-foot footprint in Broward County formerly owned by Beehive Kitchen, another local restaurant. With the new restaurant, there will be 25 new additional employees.

The “polished fast-casual” space, as the company is calling it, will also have new menu items including a premium “Las Olas” roll with mango and sustainably sourced salmon celebrating the area’s unique flavors as well as tuna poke nachos.

Ng opened the brand’s first fast-casual unit four years ago after seeing that “as a consumer, you see the success and I see my own family and children, loving Shake Shack and Panera,” so he wanted to imitate the fast-casual segment.

But this new unit is different from that initial design as well.

Food, while ordered at the counter and brought to the table, is served in porcelain — “the kind of a porcelain that you would find in other elite sushi bars” — and the glassware is made of actual glass, which makes the concept “polished,” according to Ng.

“You really feel like you’re getting a full-service experience,” said Ng.

Some consumer preferences may have changed slightly during the pandemic — many now would rather order through QR codes at the table and pay via their phones — but the heart of the model will remain the same.

And Sushi Maki’s casual-dining units are moving to this new fast-casual version as well.

Customer interactions can be conducted without even speaking to a person. Guests can order through the QR code and pay via their phones when the meal is done, only seeing a person when an employee drops off the food and the check.

This is not the first time Sushi Maki has invested in tech. A few years back, the chain brought on kiosks to serve customers better. That full roll out has since been paused after tracking showed customers were more inclined to use their own mobile devices. So, that’s where Sushi Maki made its next technology investment.

“I think that being flexible and being nimble and really looking at how guests behave is critical,” said Ng.

But this tech has posed new problems for Ng and other operators: line control.

Before, one cashier at a fast-casual unit could be taken off to slow down the line, but there isn’t an easy way to slow online ordering or control the orders coming back to the kitchen, which increases wait times.

One solution Ng has is to limit the menu at the fast-casual spots.

“There are less items and that sometimes can be frustrating because having variety is super important. But having speed of service is equally important,” said Ng.

With these plans in place, Ng is anticipating growth over the next few years in a few key markets using the new fast-casual model.

And ghost or dark kitchens could be in the future for the brand as well.

“We’re testing lots of new innovative ways to produce and deliver food that may or may not have a traditional storefront,” said Ng.

Off-premises is here to stay, and Ng knows that at Sushi Maki, which is why these non-traditional ghost or dark kitchens are appealing. At the end of the day, sushi is a product that’s easily delivered.

“One thing that we learned in the pandemic is that people love sushi. It’s food that's very portable. The quality of sushi when you eat it in a sushi bar or when you bring it home, there's not as much variation,” said Ng.

This “sushi for everyone” approach — whether through delivery or in person — is the goal of Sushi Maki.

“That's always been the heroic mission of sushi Maki, is to democratize and demystify sushi,” said Ng.