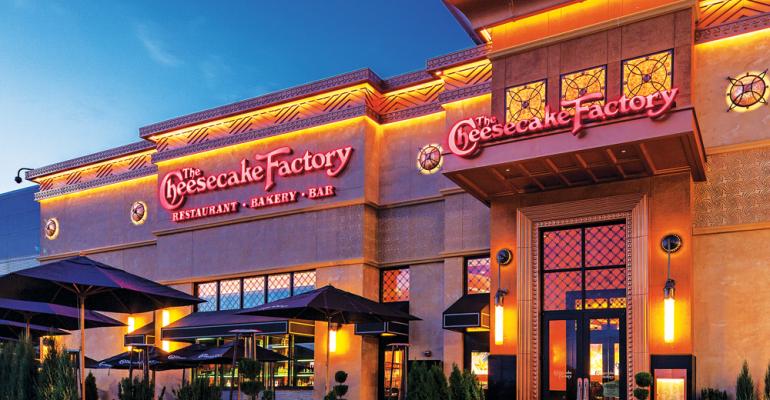 The Cheesecake Factory Inc. has found weekly sales at its off-premise-only restaurants reached nearly $5 million per unit on average and units with reopened dining rooms retained about 90% of those sales, the company said Wednesday.

The Calabasas Hills, Calif.-based company said it exited the COVID-19 pandemic’s restrictions in the fourth quarter with 75 Cheesecake Factory restaurants transitioned to an off-premise-only operating model

About 60% of its locations had indoor dining rooms reopened with capacity restrictions, said David Overton, Cheesecake Factory CEO and chairman, in a fourth-quarter earnings call.

“Sales at The Cheesecake Factory restaurants that were operating an off-premise-only model far exceeding prior peak off-premise sales volumes seen earlier in the COVID-19 pandemic,” Overton said, “and our restaurants with reopened dining rooms continued to demonstrate strong performance in the off-premise channel as well during the fourth quarter.”

David Gordon, president of The Cheesecake Factory, added that Cheesecake Factory restaurants with reopened indoor dining rooms so far in the first quarter of fiscal 2021, through Feb. 16, had same-store sales down about 9%. He said that is about $10 million per unit in annualized in sales.

“This sales volume level exceeds what we saw in October,” Gordon said. “This is supported by approximately 40% off-premise sales mix, which on a dollar basis exceeds prior peak off-premise sales volumes seen earlier in the COVID-19 pandemic.” As of this week, Cheesecake Factory had 166 locations with open dining rooms and they were averaging 50% capacity.

Cheesecake Factory executives saw a variety of reasons for the continued strength in off-premise sales.

Gordon said the wide range of menu items and price points “makes it pretty compelling for an off-premise occasion. And as a family, you certainly can order easily one, two or three times a week.”

The pandemic has also introduced new customers to the off-premise occasion.

“I think some of that behavior is going to stay,” Gordon said. “I don't use my parents always as an example. They never ordered to-go food ever before the pandemic, and now they order it all the time and find it convenient and useful. And along with continuing to go out to eat, I think they're going to be more inclined to continue to order to-go once things get back to 'normal.’”

Matthew Clark, The Cheesecake Factory’s chief financial officer, added that while the brand is unlikely to keep all of that 40% off-premise sales, it is likely to retain some. “There is definitely a stickiness to a good percentage of it,” he said.

“You've got to believe that as long as we keep some of that between where we were and where we are now and the capacity returns that we're going to be in a really good position for sales once that happens,” Clark said.

In addition, he said the average delivery customer has an order rate twice the historical average for on-premise guest. Cheesecake Factory partners with DoorDash for its delivery menus.

Gordon noted that The Cheesecake Factory’s large kitchens can accommodate the added off-premise sales without a large impact and the bakery counters are already set up with to-go sales in mind. Technology has also helped, he said.

“We've also continued to leverage technology where we can,” he said. “So things like, texting a guest when their order is ready, so they can wait in their car and not even have to come into the restaurant, allows us to ease some of the pressure you might have in the physical building, ensuring that DoorDash drivers are stationed in a particular [parking area] outside of the restaurant.”

Malls, where Cheesecake Factory has a number of locations, have allocated parking spaces for those pickup orders.

To help assure the safety of indoor dining, the company is also working to install an additional air filtration system at all Cheesecake Factory restaurants by the end of the month, Gordon said.

“While we believe we have always had best-in-class heating, ventilation and air-cooling systems, this new system uses bipolar ionization to actively clean the air, helping to kill bacteria and viruses, while reducing allergens and other airborne particles,” he said. “Third-party testing shows that it can effectively reduce pathogens, including the coronavirus strain that causes COVID-19. We have updated all of our guest-facing health and safety materials in our restaurants to inform guests about this incremental safety measure.”

Gordon said the company is also encouraging all of its staff members to get vaccinated when the vaccine is available and is providing hourly staff with paid time-off for each vaccine appointment.

During the quarter, the company opened one Cheesecake Factory in Clearwater, Fla., and its Fox Restaurant Concepts LLC division opened a Culinary Dropout and Blanco in Arizona. One restaurant opened internationally in Mexico under a licensing agreement during the fourth quarter of fiscal 2020.