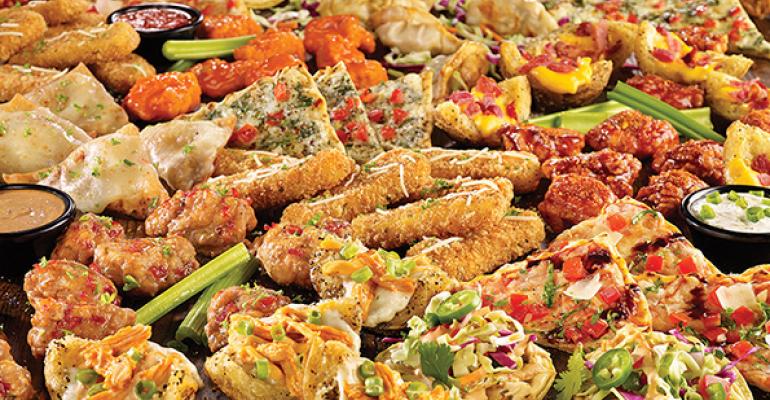 Applebee's Neighborhood Grill & Bar unveiled plans for what it anticipates will be its “largest-ever food sampling event,” where the chain will offer free sampler plates of two new items.

Kansas City, Mo.-based Applebee's, a division of DineEquity Inc., on Wednesday said it anticipates serving about two million plates of Sriracha Shrimp and Churro S'Mores during its "Taste the Change Day" on Tuesday, July 21, at nearly 2,000 restaurants. The offer is available to dine-in guests all day and limited to one per person.

Applebee’s offer comes on the heels of the return of Carrollton, Texas-based TGI Fridays promotion of “Endless Appetizers,” the $10 deal that started last year that provides continuous servings of a select appetizer. And Red Lobster has been offering free appetizers or desserts as a reward for customers to sign up for the chain’s email club.

“These promotions are fun for everyone, and if designed well are profit-building rather than profit-diluting,” said Leslie Kerr, founder of the Boston-based IntellaPrice consultancy. “Guests take note because who doesn’t love something free when dining out?”

Kerr noted that in freebie items, it’s in “the operator’s interest to limit the giving, and it’s much easier to do this with appetizers than high-ticket or high-margin items such as entrées or beverages.”

In the Applebee’s upcoming give-away, for example, a company spokesman said the average sales price of the churros is $4.22, which is the same portion size that consumers will receive on “Taste The Change” sampling day. The restaurant will also serve a five-count portion of shrimp during the promotion, a smaller portion than the full 10-count serving of shrimp that has an average sales price of $7.58.

Kerr noted that the fine print on these most recent casual-dining offers shows that operators are mindful of restricting the impact on the balance sheet, with a limit of one per table or limits on time and choices.

“In the case of TGI Fridays, ‘Endless’ does mean endless, but it’s one selection we are talking about, so most guests will have their fill in a reasonable amount of time,” Kerr said.

Kerr said operators know to build these promotions with margins in mind.

“It’s common to see giveaways around fried selections, or starch-based items, with just a bit of protein in the mix,” Kerr said. “You know that there is give and take between the marketing department and the finance team when these brands are planning promotions so they don’t give away the farm.

“That’s why the appetizers on promotion won’t be steak tartare or seared tuna,” she said, “and that’s fine by consumers because they still see high value by virtue of getting a freebie.”

Restaurant operators have been putting added attention on the appetizer and “small-plate” categories on the menu, Kerr said.

IntellaPrice conducted a study this past spring that found among casual-dining chains the average appetizer price was $7.74, she said.

“That includes $3 chips and salsa, and customizable options like five shareable plates for $22 to $24,” Kerr said. “At those price points, operators can build sales and protect the bottom line, should appetizer sales cut into entrée sales. The appetizer sampler platters of yesterday are evolving into bigger, better offerings, and with an average price per selection of $4 to $5, they still say ‘value’ to guests.”

Applebee's president Steve Layt, in a statement announcing the sampling event, said the effort was also intended to introduce new patrons to the chain’s new menu and renovations or to bring back lapsed customers.

“Our new food and new look and feel will pleasantly surprise those who haven't visited us in awhile," Layt said. "We're confident that if they give us a try, they'll be back."

The return of the appetizer deals indicates they have been successful for operators.

“The fact that more operators are jumping on this bandwagon and those that were already on are repeating the programs means two things,” Kerr said. “The first is that there is a need to build the financial momentum, and the second is that the first go-round saw positive results.”