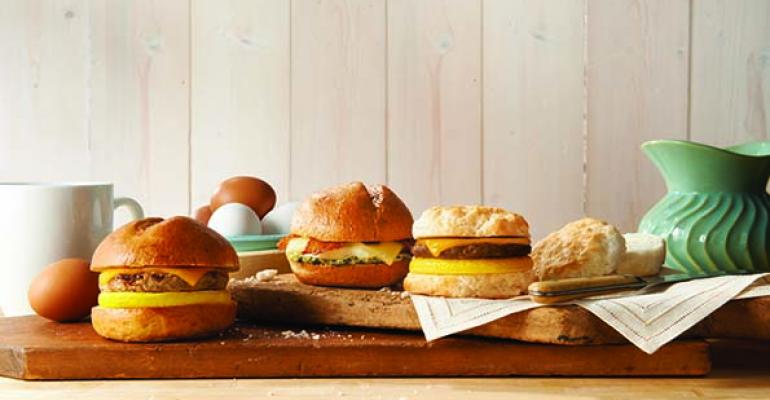 Today&rsquo;s trendy, chilled coffees are just the tip of the iceberg, breakfast sellers report. The Breakfast Journal is a Supplement to Nation&rsquo;s Restaurant News and Food Management. Get all of the articles from the November 2016 Breakfast Journal here.

It’s Sunday brunch at Summer House Santa Monica in Chicago. A pair of tap handlesstick out behind the restaurant’s bakery counter. They pour not beer, but cold brew coffee. A sign touts La Colombe Pure Black “steeped for 16 hours,” Iced Latte “with silky foam” and Black & Tan — “the best of both worlds” — made by mixing the two. Each is served on the rocks in a tall glass with a straw and is priced at $5.99.

Cold brew and other variations of iced coffee are growing rapidly in coffee shops, breakfast-and-brunch restaurants, onsite foodservice operations and as bottled and canned beverages at retail. It is helping to fill the void caused by lower carbonated soft drink sales, and encourages coffee sales in warmer months. It is a popular refresher in operations that feature breakfast foods.

Cold brew coffee is made in a restaurant kitchen or a coffee roaster’s plant by soaking ground coffee in cold or ambient-temperature water from 12 to 24 hours and straining out the grounds. The process uses time to extract flavor rather than the hot water of conventional brewing. Fans of cold brew say it yields cold coffee that is smoother, less bitter and less acidic than iced coffee made the old-fashioned way by simply pouring hot coffee over ice.

The long soaking “brings out amazing flavor” in cold brew, says Jeff Mahin, chef/partner of Summer House, one of the Chicago-based Lettuce Entertain You Enterprises restaurants. “And having it on a draft system makes it so easy to store, to receive, to pour for guests, and to keep accountability. It is the smartest thing in the world.”

A recent Packaged Facts survey of coffee drinkers finds that 10 percent drink iced coffee most often, while only half drink hot coffee exclusively. Cold brew, in particular, is the most frequent choice of 5 percent. All told, 14 percent of coffee drinkers report having ordered cold brew in a restaurant or café.

The industry’s leading coffee players are keen on its potential. After launching its popular cold brew in 2015, this year Starbucks Coffee is expanding its “cold bar” offerings to include Vanilla Sweet Cream Cold Brew and nitrogen-infused Nitro Cold Brew coffee. Archrival Dunkin’ Donuts launched its own cold brew coffee nationwide in August.

Starbucks says it expects the category of cold coffee to double in the next three years. It also notes that iced coffee consumption grew by 75 percent in the past decade and cold brew sales in particular spiked by more than 300 percent between 2010 and 2015, citing Mintel research and its own consumer insights.

Sheetz, Inc. also is launching its own cold brew this fall. The Altoona, Pennsylvania-based company operates 533 convenience stores that compete against major coffeehouse and restaurant chains for coffee and breakfast trade. Its cold brew is made daily with French roast coffee slowly steeped in the stores.

“Right now, there is so much passion around cold brew,” says Matt Gray, coffee concepts manager for Sheetz. “It is everywhere you look.”

Gray describes Sheetz cold brew as “darn near creamy” with a blend of sweet and bitter flavors, “accessible to every coffee drinker.”

Holler & Dash, a fast casual, Southern style biscuit house in Homewood, Alabama, features Stumptown Cold Brew and Stumptown Nitro Brew on tap. “I sell more drip hot coffee early in the morning, but as the day wears on, more and more Cold Brew and Nitro,” says Mike Chissler, chief operating officer of the concept, which was launched in March by Cracker Barrel Old Country Store Inc. “In our space, serving breakfast, lunch and brunch, they really fit all the hours of the day.”

Noting the generous profit margin of specialty coffee, Chissler says he expects to see “more people in the game trying to capture some of that beverage [profit] mix” of cold brew.

At the University of South Carolina, more than 6,000 incoming freshmen were offered cold brew coffee at the orientation breakfast on the Columbia campus. “I have been on campus three years, and I can say that the iced coffee participation has gone up each year,” says Scott Barrineau, marketing manager for the Sodexo foodservice account there.

Sodexo offers cold brew and nitro coffee on campus through the Starbucks We Proudly Brew program and Indah Coffee Co., a local roaster. “It is the cool, trendy thing in the marketplace,” says Barrineau.

At Lebanon Valley College in Annville, Pennsylvania, students increasingly ask for iced rather than hot mochas and lattes. “That’s because the beverages  are much smoother and they can drink them right away without waiting for them to cool down,” says Landis Brown, retail manager for Metz Culinary Management. They also can get cold brew from a new Peet’s Coffee & Tea shop   on campus and bottled lattes and mochas. What’s more, Brown says he is looking into the nitro coffee process.

At Caribou Coffee patrons have been drinking the signature Cold Press Iced Coffee with breakfast items for more than two decades, says David Marshall, lead culinary chef of the Minneapolis-based chain, which has 274 company-owned and 130 licensed stores in the U.S. Versions of hot specialty coffees blended with ice — like the Pumpkin Cooler and Crème Brûlée Boudino Cooler — are also popular. Next year Caribou will innovate with a number of cold beverages, including nitro coffee.

Chef Brandon Frohne, director of culinary for Holler & Dash, says he looks at cold brew like “a really good wine program.” One of his favorite pairings is cold brew with the Andouille Hustle, a signature biscuit topped with andouille sausage, cheddar cheese and housemade sausage gravy.

According to Sheetz’s Gray, cold brew is a better match than hot coffee for breakfast items like tater tots and hash browns.

As for what’s next, Holler & Dash is looking into cold brew aged in bourbon barrels for novel flavors and rotating various styles on tap. “We would change them almost seasonally, like you would craft beers,” says Chissler.