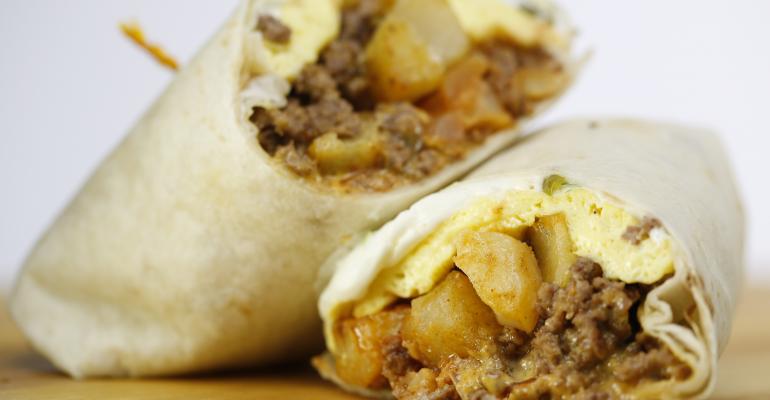 Welcome the day with alternate proteins

Operators are menuing different meats and even non-meats for customers who want variety. The Breakfast Journal is a Supplement to Nation&rsquo;s Restaurant News and Food Management. Get all of the articles from the November 2016 Breakfast Journal here.

For some, breakfast is not always about bacon. Although bacon remains a favorite among restaurant patrons, operators say breakfast is the perfect daypart to menu beef, duck, seafood and even plant-based proteins because consumers are looking for something different in their morning meal.

According to Datassential MenuTrends, braised pork and pork belly have experienced more than 300 percent menu growth on breakfast menus since 2012. Pork shoulder is up 277 percent.

“We do have a few interesting proteins aside from the usual suspects,” says Spencer Lomax, the director of sourcing, or purchasing director, at the 17-location Snooze. “We look at it as some creative twists on classic breakfasts.”

Lomax says eggs Benedict traditionally calls for ham, but using different pork variations can help elevate the dish. Also, these proteins are versatile and are featured in other menu items. There is pulled pork in the Havana Daydreaming, which is the Snooze version of a Cubano sandwich with shaved ham, Gruyère cheese, homemade pickles and a sunny side egg with Dijon hollandaise, served open-face on a hoagie roll.

Operators employ the proteins in other dayparts not only to avoid food waste, but because guests clearly like the proteins. At Denver-based Smiling Moose Rocky Mountain Deli, the Mo! Rito breakfast wrap features the signature Mo! Meat blend of ground beef and melted American cheese that is also included in the Original Mo!, together with savory cream cheese, seasoned potatoes and house-made salsa  fresco and wrapped in a flour tortilla. “You can move mountains with this one,” says chief executive Dan White. “It has remained the No. 1 most popular breakfast wrap because of the unique spin we put on a traditional breakfast wrap.”

While a unique spin is important, there are also practical considerations when adding a breakfast item to the menu. “The flavor, value and convenience are ultimately going to be the most important factors leading to guest satisfaction,” White says. “If you can push the envelope with breakfast offerings and still exceed guests’ expectations, you will earn a loyal following and grow your breakfast daypart.”

Sometimes consumers are loyal even when an item is menued at a higher price point. People are willing to pay more for duck than for beef, says chef Joe Dobias from Joe & MissesDoe in New York. The eatery serves Duck Hash with two poached eggs and toast. “The Duck Hash has been the best-selling brunch item on my menu for eight years straight,” he says. “Duck is pretty moist so it stands up to the same things corned beef would but needs no time to cure.”

Seafood is another protein that commands a higher price point because guests perceive it to be an upscale, premium protein. Davidson, North Carolina-based Famous Toastery offers a Lobster Benedict, which features an English muffin, avocado, tomato, poached eggs and lobster. Famous Toastery also offers a lobster omelet and sometimes a lobster quiche. “Most of the time we have it on the menu,” says Robert Maynard, chief executive and founder of the 14-location better-breakfast concept. “We fly in fresh lobster daily.”

Famous Toastery also offers a dish called the New Yorker, which is scrambled eggs, smoked salmon and onions with a choice of hash browns, grits or fruit and toast. Other seafood choices include crab or shrimp, and Maynard says both make great accompaniments for scrambled eggs. North Carolina locations have menued trout, a local favorite. “We have had a lot of success with putting seafood on the menu,” he says. “We continue to try new things. If you are not trying, you’re dying.”

Another way to offer alternative proteins at breakfast is to make other meals available in the morning. At Dallas-based Which Wich Superior Sandwiches, with 400 locations, the Green Eggs and Ham is a popular item at breakfast, but guests order other sandwiches in the morning, too. “Everything is completely customizable,” says Hala Habal, vice president of corporate communications. “Our egg salad is not on the breakfast menu, but it is one of the favorite breakfast items.” Peanut butter and jelly is also big at breakfast.

Plant-based proteins also are gaining as a non-meat alternative. According to the National Restaurant Association’s What’s Hot 2016 Culinary Forecast, protein-rich grains and seeds such as hemp, chia, quinoa and flax were among the top five new trends, with 62 percent of chefs calling it a hot trend.

Phil Wright, corporate chef for Los Altos, California-based Epicurean Group, says corporate clients have healthy smoothies at breakfast. For example, some tech firm employees like to work out in the morning, and when they arrive at the office they want a smoothie with protein powder or flax seed. “You don’t want a Denver omelet and bacon after you get back from a run,” he says. “There is nothing better than a great smoothie bar laid out for them that they can add protein to.”

Plant-based proteins also are gaining in college foodservice. Bucknell University in Lewisburg, Pennsylvania, recently added health bowls to the breakfast offerings. “The health bowls have been one of our largest movers,” says Jay Breeding, director of retail operations for Parkhurst Dining at Bucknell. “The guest feedback was that they want protein but they don’t necessarily want red meat or chicken until later in the day.” Students can build a health bowl with Greek yogurt, açaí,  chia seed pudding, coconut milk, nut butters and other good sources of protein.

Last year Parkhurst Dining launched a smoothie program, and that has also been successful. “We always try to make sure there is something interesting and new when the kids come back to school,” Breeding says. “They are away from home and they eat with us every day. We don’t want them to get bored.”