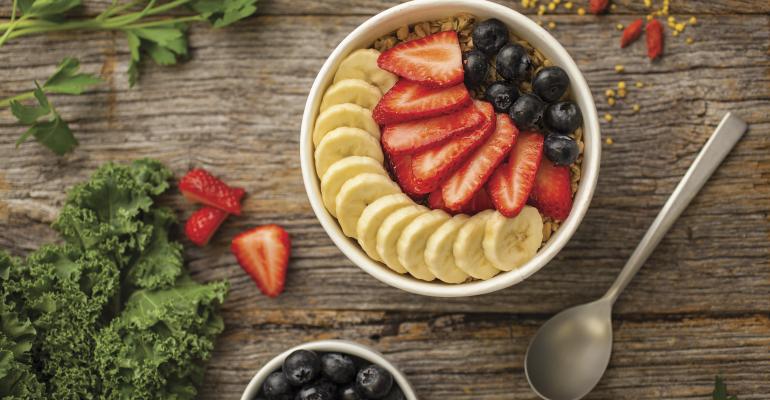 Foodservice operators are increasingly serving healthful morning meals in a bowl. The Breakfast Journal is a Supplement to Nation&rsquo;s Restaurant News and Food Management. Get all of the articles from the November 2016 Breakfast Journal here.

Consumers looking for a healthful morning meal that can get them through a busy day have a new go-to dish: the breakfast bowl. A melange of ingredients in one easy meal — sometimes savory, sometimes sweet, usually good-for-you and often customized — breakfast bowls are increasingly being rolled out on menus at chain restaurants and colleges and universities nationwide.

According to research firm Datassential’s April 2016 Keynote  Report,  The New Healthy, today’s consumers feel they should focus mostly on healthful eating at breakfast, and broadly look to that daypart to be their healthiest meal of the day.

“People are eating healthier,” says Robert Maynard, owner of Famous Toastery, a full-service breakfast, brunch and lunch concept with 12 locations. “Food is just simply going in that direction and if you don’t follow along, you’ll be left behind.”

One way consumers have been eating more healthfully in the morning is by ordering breakfast bowls, which have been increasingly appearing on menus at U.S. restaurants. According to Datassential, breakfast bowls appear on 7 percent of U.S. breakfast menus, an increase of 66 percent over the last four years.

Famous Toastery is among the many restaurants offering breakfast bowls. The restaurant’s specials menu features an option to build a quinoa bowl from scratch or choose from set recipes, such as the Greek Quinoa Bowl made with quinoa, cucumbers, tomatoes, red onion, olives, feta, olive oil and topped with a choice of eggs, chicken or salmon. While they may not sound very breakfast-oriented, the beauty of the quinoa bowl, says Maynard, is that guests don’t see it as being for any single meal occasion. Popular and ordered at all dayparts, Maynard says the quinoa bowls will soon go on Famous Toastery's permanent menu.

“Not many people order a burger at 7 a.m., but you will find someone getting a quinoa bowl at 7 a.m. and at 3 o’clock in the afternoon,” says Maynard.

For the last two decades bowls have been a part of the lunch and dinner menu structure at Sharky’s Woodfired Mexican Grill, so it’s no surprise that when the premium  fast casual chain opens its first location serving breakfast in Studio City, California,  this fall that it will include an Organic Breakfast Bowl.

“We believe it will be one of our most popular items,” says Steve Paperno, Sharky’s founder and chief executive. “Bowls offer an awful lot of flexibility. It’s almost like a blank canvas. It moves where you want to move.”

Other healthful and hearty choices on the new breakfast menu will include Wild Salmon Avocado Toast, made with organic rustic wheat toast, smashed avocado,scrambled organic eggs, wild caught salmon and salsa verde served with breakfast potatoes and a small side salad. It also will offer the Breakfast Power Plate, featuring two organic eggs, a choice of grilled chicken or tofu, and a side of breakfast potatoes.

If the breakfast offerings are as big a hit as Paperno believes they will be, the plan is to introduce breakfast to all 23 locations.

It’s not only small chains that are offering breakfast bowls; even burger giant McDonald’s has gotten in on the bowl business. In February McDonald’s began offering an egg white and turkey sausage bowl with spinach and kale, and a scrambled egg and chorizo bowl with a hash brown, salsa and pico de gallo at select restaurants in Los Angeles and San Diego.

Santa Ana, California-based Nekter Juice Bar has long had açaí bowls — containers filled with a combination of the tropical superfood, fruits, veggies, granola, seeds, milks and other good-for-you ingredients — on its menu. But it has seen a noticeable increase in sales of late. The healthy lifestyle chain, which has some 52 locations, reports a 7 percent increase in sales of açaí bowls over the past 12 months. The top-selling bowl is the Açaí Banana Berry Bowl, made with unsweetened organic açaí, fresh fruit and hempseed granola.

“The idea of ‘healthy’ is changing,” says Nekter co-founder Alexis Schulze. “We believe people are looking for cleaner, fresh alternatives, and the numbers seem to support that belief. Our guests enjoy our bowls because they’re more substantial than a juice or smoothie.”

The açaí bowls are available anytime of the day, but are popular at breakfast, as are some of the chain’s juices and smoothies, says Schulze.

The Nekter team is currently testing another breakfast offering: a line of Chia Seed Pudding, in berry, chocolate and limited time seasonal flavors such as pumpkin.

“We were looking for a breakfast offering which was a bit more substantive and could stand on its own or align nicely with a juice,” says Schulze. “They are nutrient dense, which we felt made it an attractive option for our guests for a healthy breakfast, dessert or even a snack.”

Also seeing a desire for more healthful breakfast options is Chartwells Higher Education Dining Services, which provides guest services within 270 college and university dining environments throughout academic institutions across the U.S. To fulfill its guests’ healthy breakfast needs the foodservice management company is serving up a variety of options from egg whites and oatmeal to grain salads and breakfast salads to fruit and yogurt. Recently rebranded for a new generation, the foodservice company says it is also beginning to experiment with breakfast bowls.

As part of a complete refreshing of its breakfast offerings, last year Sodexo added breakfast bowls to the offerings at its more than 700 accounts with public and private colleges and universities and independent schools.

While the bowl offerings vary from client to client depending on the guests' needs, there are usually a few set recipes available each day, such as the Italian Breakfast Bowl made with fresh scrambled eggs, red sauce, mozzarella cheese, Parmesan cheese and baked in the oven. However, guests can always customize their own breakfast bowl. The Sodexo culinary team also has applied the bowl philosophy to its steel-cut oatmeal, offering set recipes with innovative add-ins, such as steel-cut oats with maple ham and a whole cracked egg, and steel-cut oats with bacon, apple and cinnamon. They can also be fully customized.