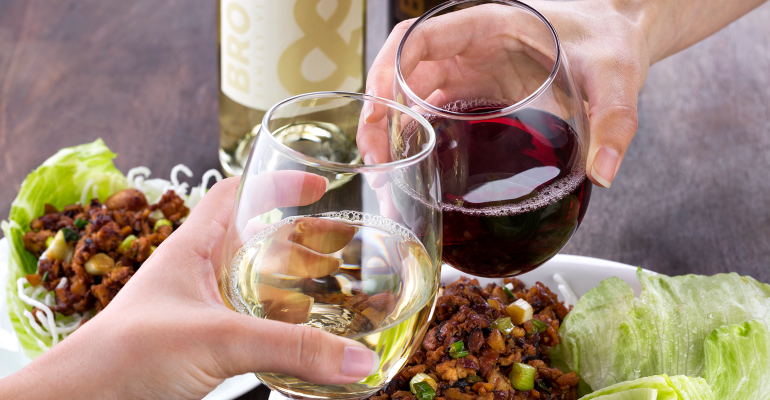 Blends were developed specifically for the chain’s food

“It’s a premium wine blended with our cuisine in mind,” said Melton, who worked with Browne Family Vineyards owner Andrew Browne to develop the wines. The white wine is an off-dry blend of 81 percent Riesling, 10 percent Sauvignon Blanc, 7 percent Pinot Gris and 1 percent each of Chenin Blanc and Roussanne, from grapes from Washington’s Columbia Valley.

“We wanted a wine that would be slightly sweet and had some fruity components, but still some crisp, clean acidity,” Melton said, adding that the wine has aromatics of dried mango and kiwi.

P.F. Chang’s said the white wine was designed to pair with dishes such as lettuce wraps, spicy chicken and crispy honey shrimp.

The red wine is a blend of 80 percent Merlot, 13 percent Cabernet Sauvignon and 7 percent Syrah, and is meant to go with dishes such as P.F. Chang’s Northern-style ribs and Mongolian beef. “We knew we wanted it to be structured and pretty bold, but with lower tannins than a Cab, and to keep the alcohol in check,” Melton said, noting that the wine surpassed expectations of pairing well with P.F. Chang’s food.

“I was most concerned to keep it fruity and lush, but to have the tannin structure there,” she said.

Melton said the wines already sell well at P.F. Chang’s, but declined to give specific figures.

“You’ll see wine on most tables,” she said, adding that she hoped the new wines, developed specifically for P.F. Chang’s menu, would help dispel the myth that wine and Asian food don’t pair well. Melton and Browne developed wines that would “enhance the cuisine and still have the wine show through,” she said.

The hot climate and longer days of the Walla Walla area of eastern Washington helped produce juicier fruit flavors than wines from Napa or Santa Barbara in California.

“It has a lot more strength and structure,” Melton said.

Front-of-house employees were enjoying introducing the wines to customers, she said, which were in restaurants last week.

“The servers got really excited. I love doing this for customers, but I really felt like this was such a great way to reach servers, too,” she said.